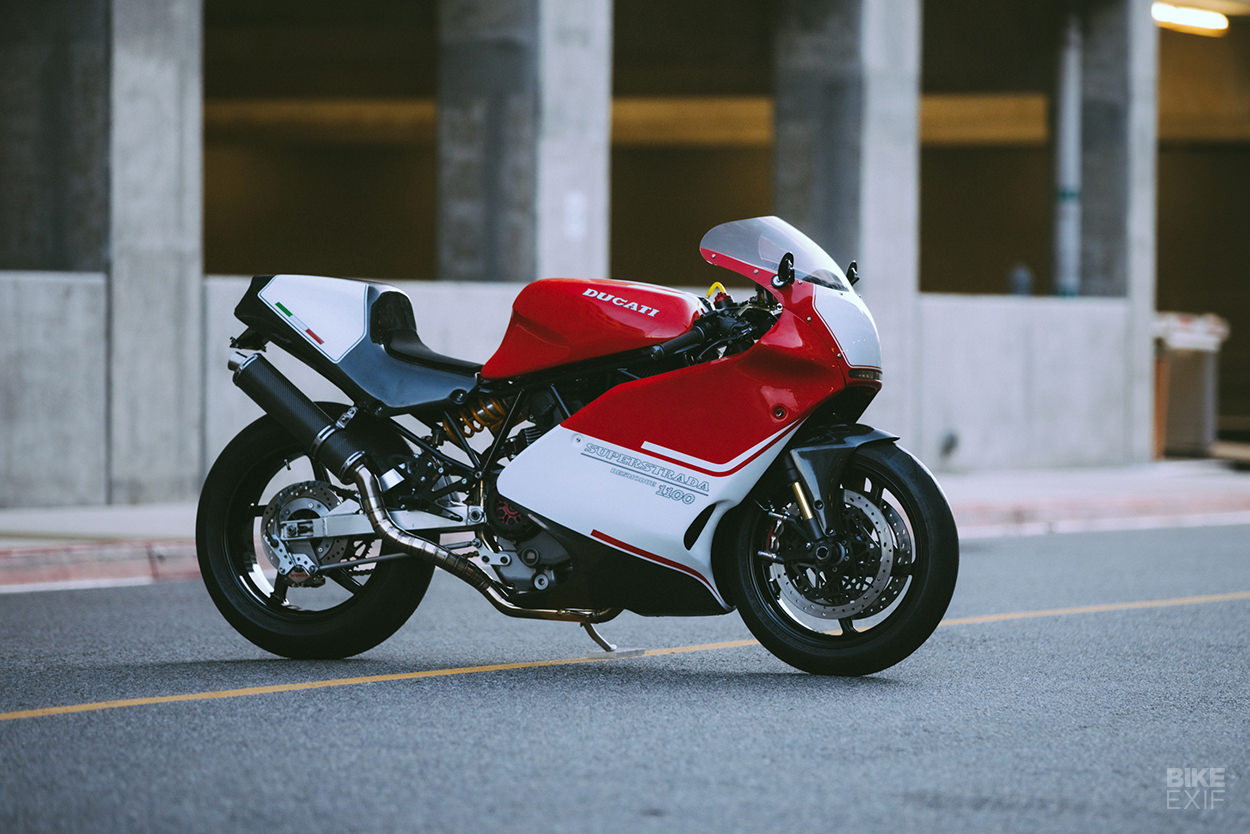 Mike Vienne is a man obsessed by weight. His specialty is turning blunt knives into razor-sharp scalpels: or rather, improving sportbikes by stripping off everything that slows them down.

He runs L.A.-based Championship Cycles, which “began from the idea that less is more. Because more is heavy, and heavy is slow.” 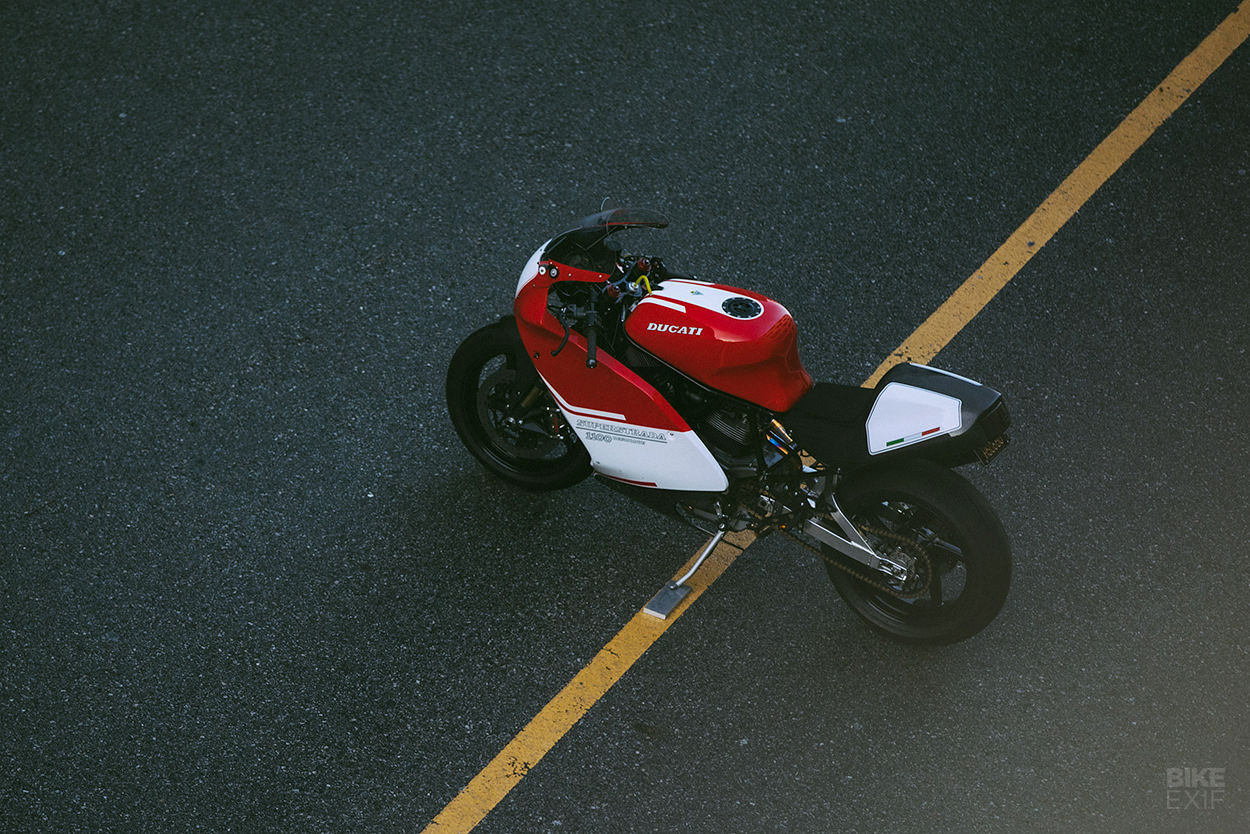 Normally he focuses on removing parts compromised by regulations and cost restrictions. But occasionally he’ll dig deeper into a bike and come up with something completely different—like this Ducati 1100 ‘SuperStrada’.

“Last year, the owner of a 1995 Ducati 900 SuperSport contacted me,” says Mike. “It’s also one of my personal favorites, and he had a desire to create something unique.” 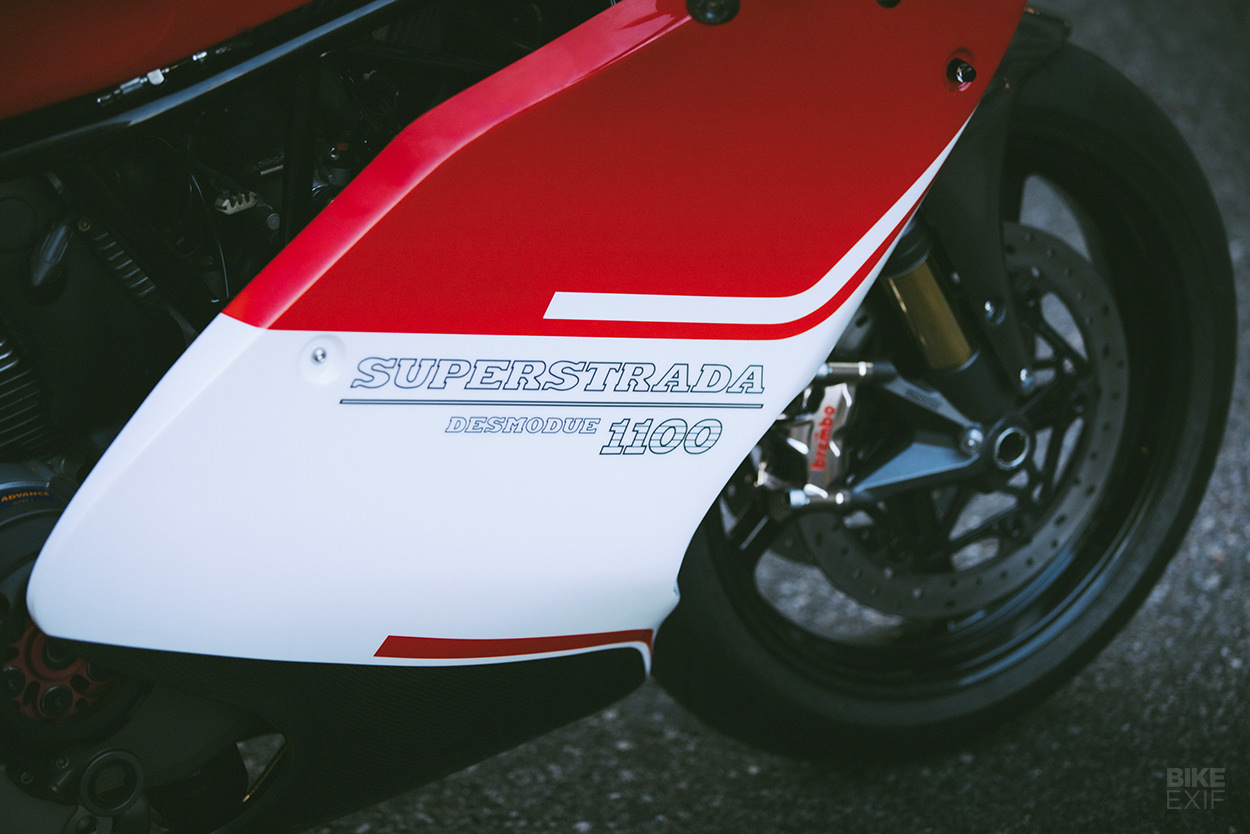 The bike had been sitting for many years though, after the air-cooled L-twin motor had given out. “A good portion of the original bodywork was damaged too,” says Mike. “The tank and carburetors were caked solid with the evaporated remains of five-year old fuel, the suspension was leaking, and anything not covered in oil was rusted.”

Despite this inauspicious starting point, the owner’s goals were very ambitious. “He was asking a lot from a 25-year-old motorcycle. But this wasn’t meant to be a restoration, so I had some creative latitude.” 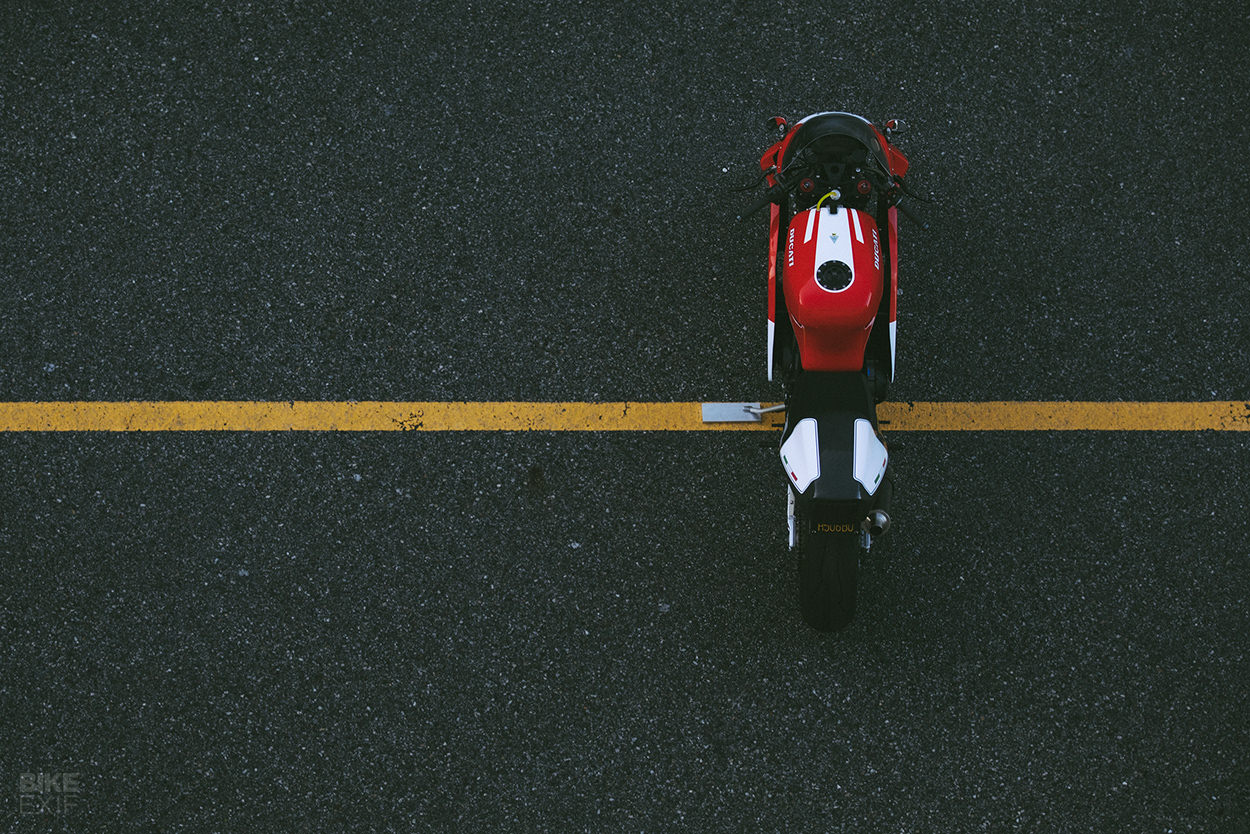 Mike proposed a modern reworking of Ducati’s own 900 Superlight—a sportier, more aggressive version of the 900 SS—and chose to focus on handling and lightness as the foundation of the build. 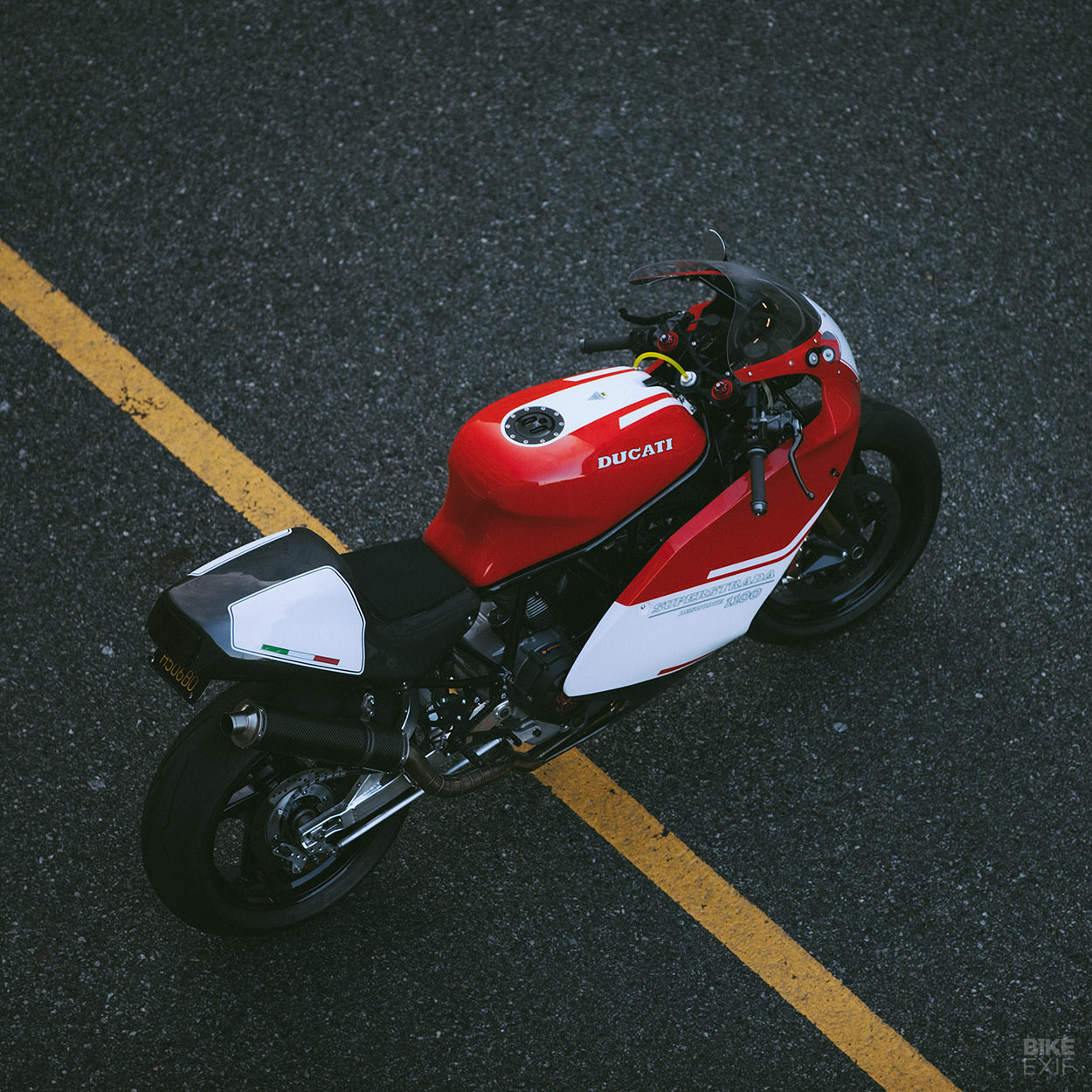 Rather than attempt to rescue the old 900 SS motor, Mike decided to install a newer, fuel-injected dual spark engine from a Monster 1100. It’s good for 95 horsepower in stock form.

Mike describes the engine swap as a “relatively easy” fit with the 900 SS chassis and swingarm, and as a bonus, the bigger engine is actually lighter than the older one—due to newer manufacturing processes. “You also gain reliable fuel injection, plus a mappable ECU.” 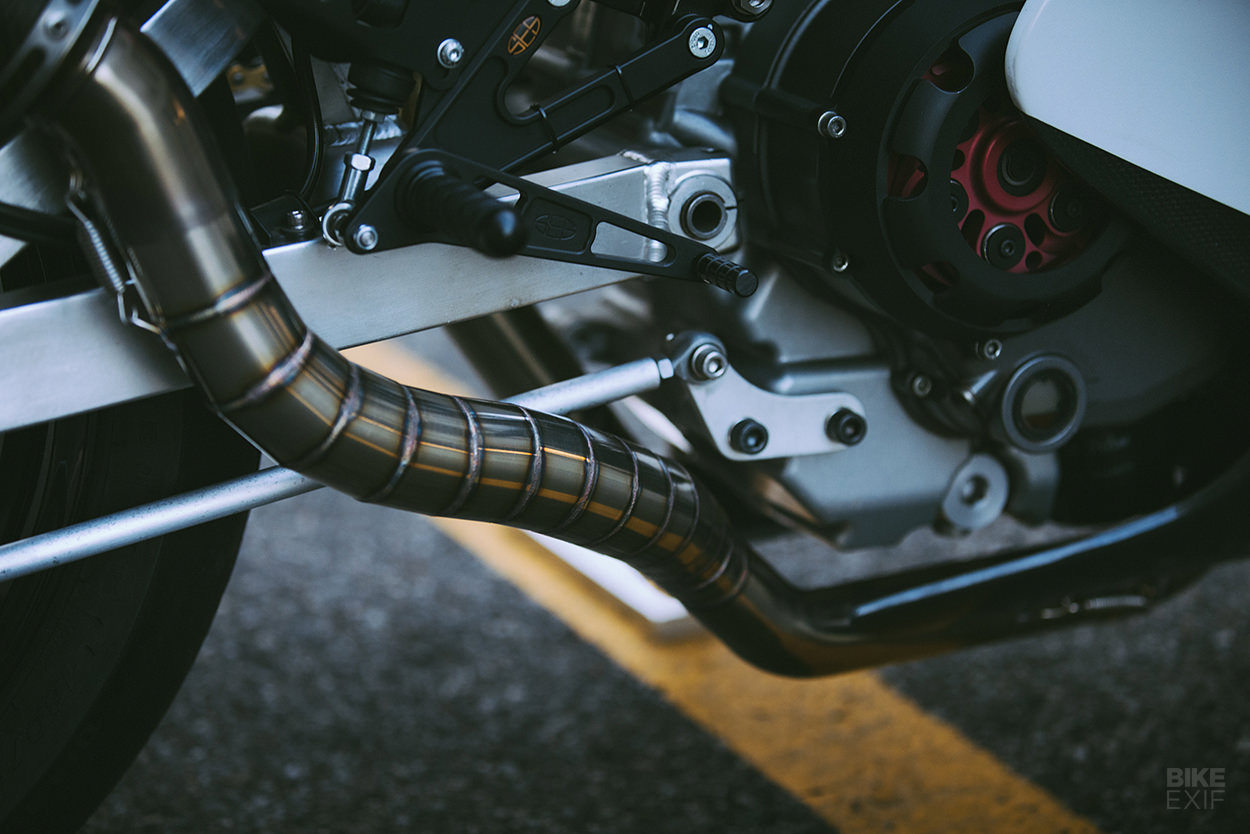 The very cool 2-into-1 exhaust system was fabbed up by a friend of Mike’s—“the relatively unknown moto talent named Max Hazan!” Mike reflashed the ECU to match it.

With the more powerful engine installed, it made sense to step up to fully adjustable suspension and radial brakes. Fortunately, as enthusiasm for the bike grew so did the budget—and more money was allocated to the project. 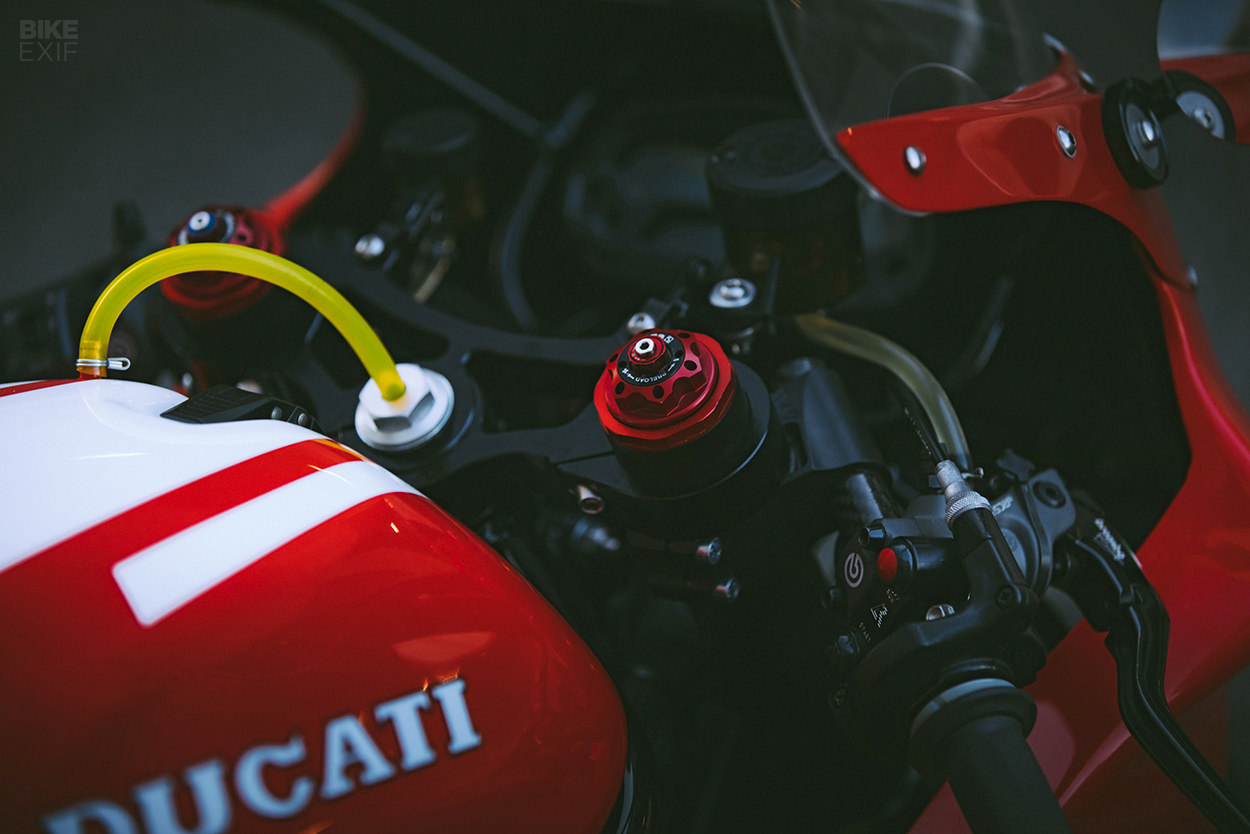 Mike ended up removing the stock fork internals and replacing them with a Mupo cartridge kit. And while the suspension was apart, he decided to anodize and titanium nitride coat the external pieces. 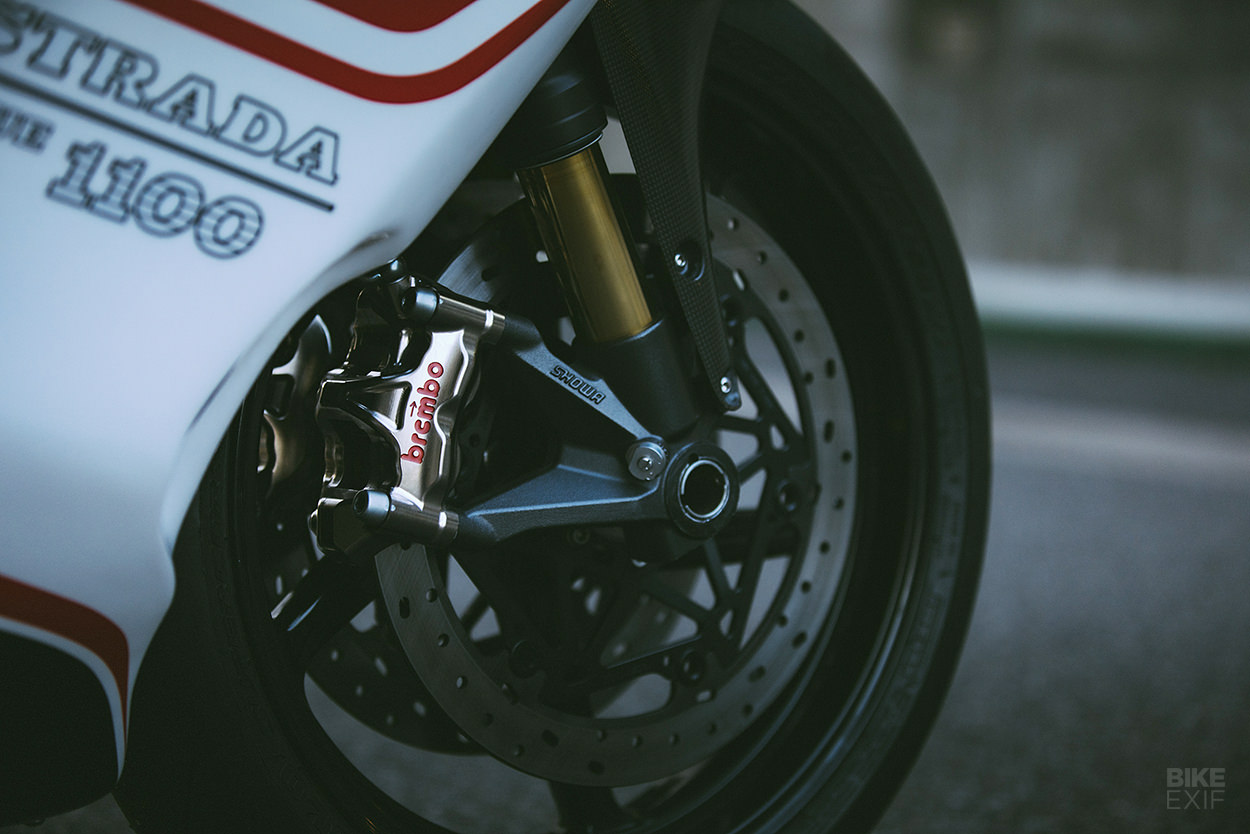 The stock oil cooler has been up-specc’d to a higher capacity Febur unit, to keep engine temps under control on hot Southern California days. Mike has also added a Yoyodyne slipper clutch, a quick shifter, a set of performance air intakes to help the engine breathe more freely, and a 520 chain conversion.

In the continuing efforts to keep weight in check, all of the bodywork is now carbon fiber. “I was able to find a perfect set of original Ducati Performance carbon side panels, and had a tail and nose fabricated to match,” says Mike. 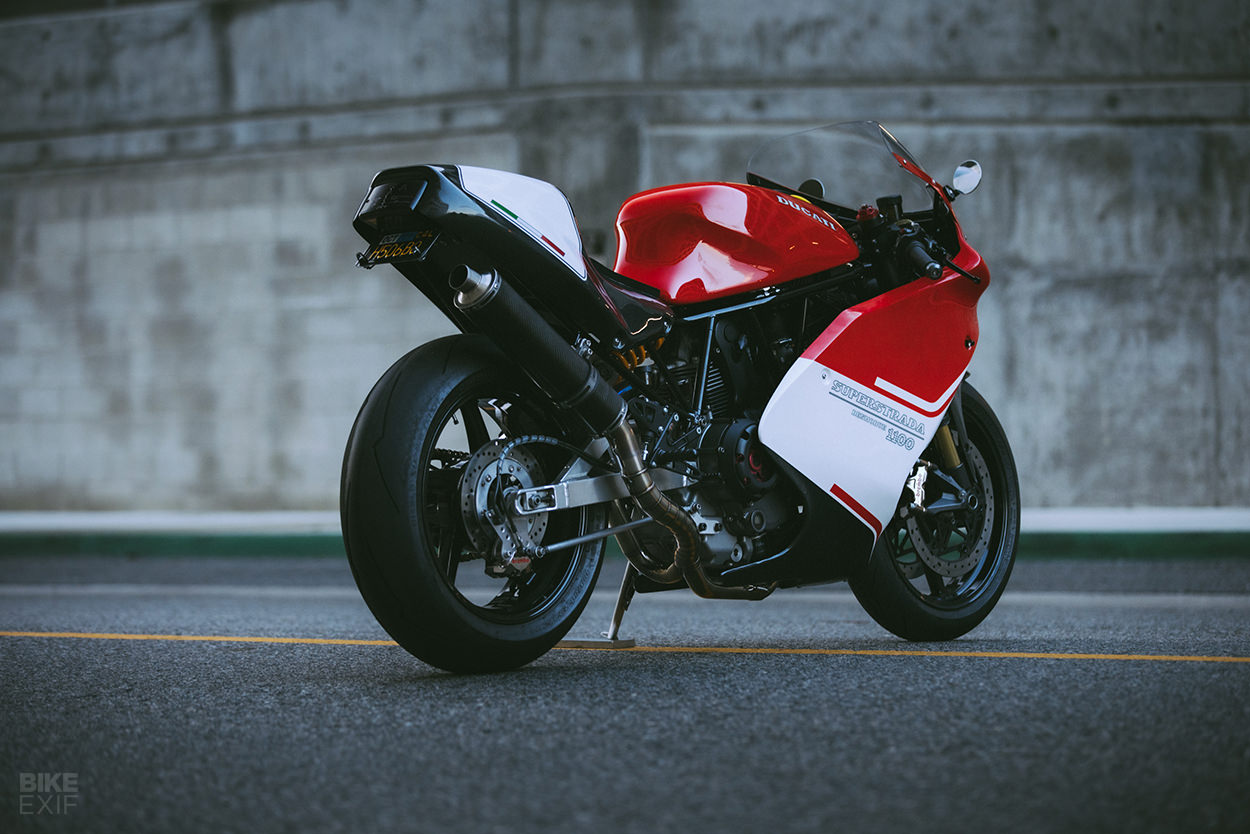 “The fuel tank has been replaced by an exceptionally light Kevlar fuel cell. Combined, those items alone shed roughly 20 pounds of unnecessary weight!”

Mike then went into the smaller details to lighten the 900 SS: he detabbed the steel frame, and tore out nonessential wiring and componentry. He also fabricated a bunch of bits out of lightweight aluminum, to replace heavier steel factory parts. Discreet LED lighting and a simple racing seat pad help matters too. “Essentially, I stripped the Ducati down to its core elements.” 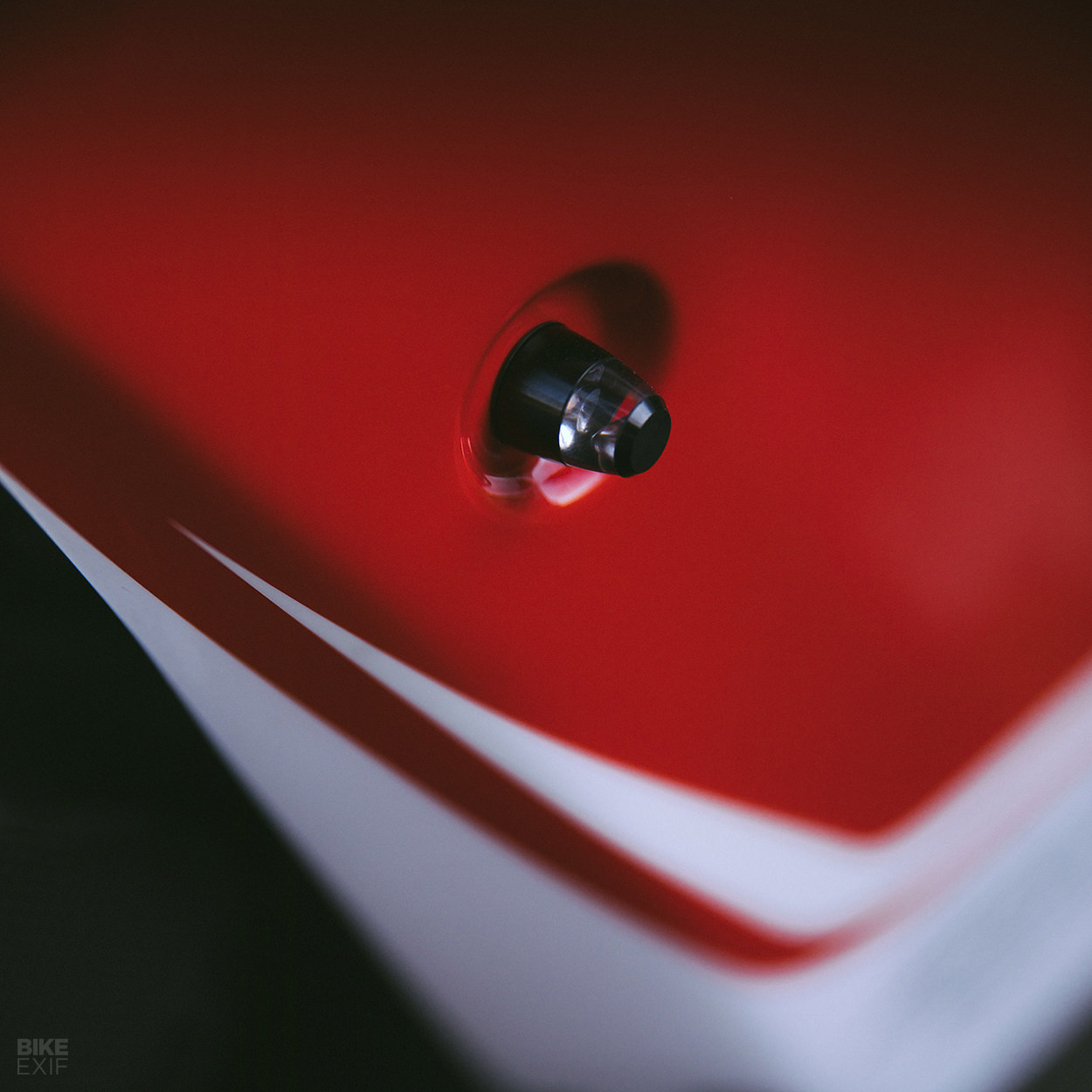 Ultimately, there’s room to gain even more weight savings in the future—via lighter wheels than the Marchesinis, for example. But right now the bike sits at 352 pounds wet, which is just 160 kilos with a full fuel load. (For reference, the stock 900 SS was 415 pounds/189 kilos dry.)

With everything screwed back together, Mike took the Ducati up north to Willow Springs Raceway for a few shakedown laps on the big track. 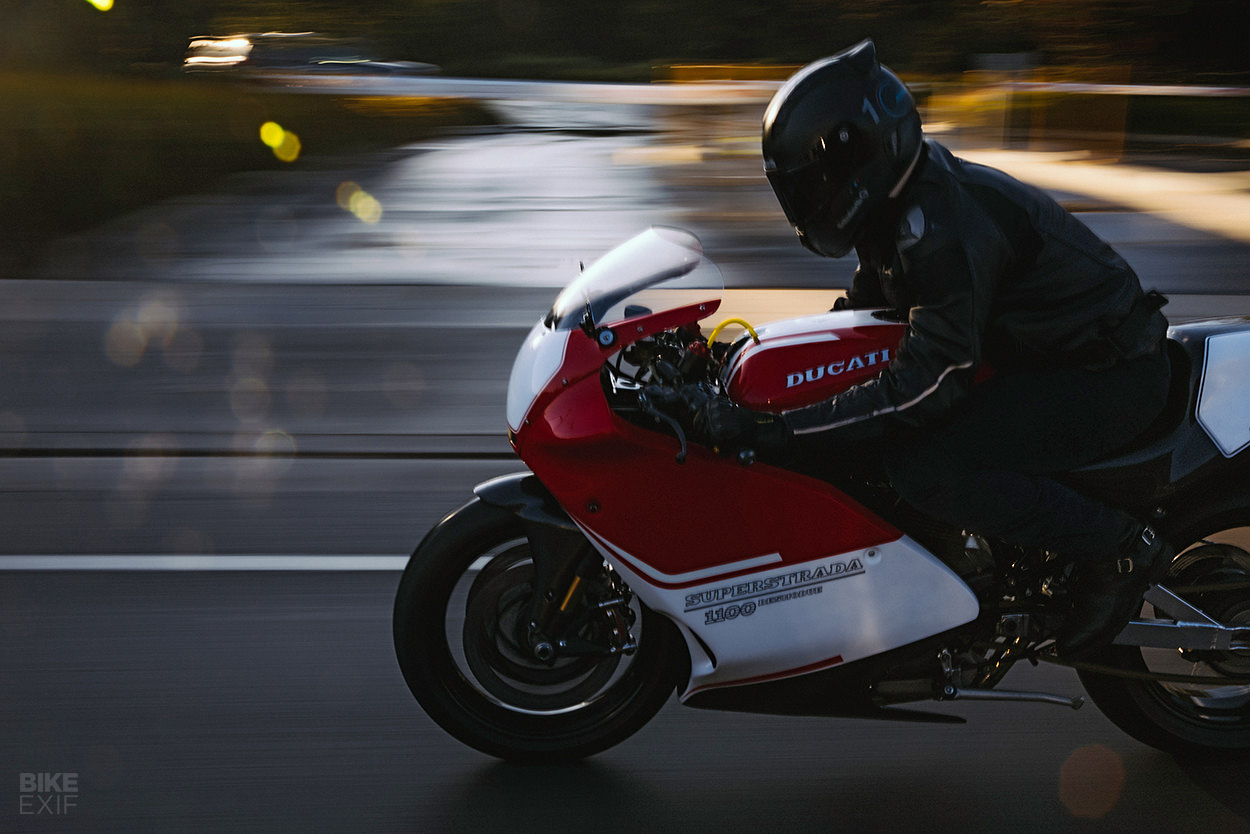 “The suspension, brakes and overall lightness come together remarkably well,” he reports. “You can dive into a corner much deeper and later than was possible before. It may not outrun a modern liter bike down the front straight, but you’ll certainly out-brake them going into the first corner, and get it turned and back on the power ahead of them.”

Realistically, this Ducati is more likely to spend time carving roads in the nearby canyons than on the track. So Mike and his client stepped away from the obvious Superlight moniker, and chose SuperStrada as its new name. 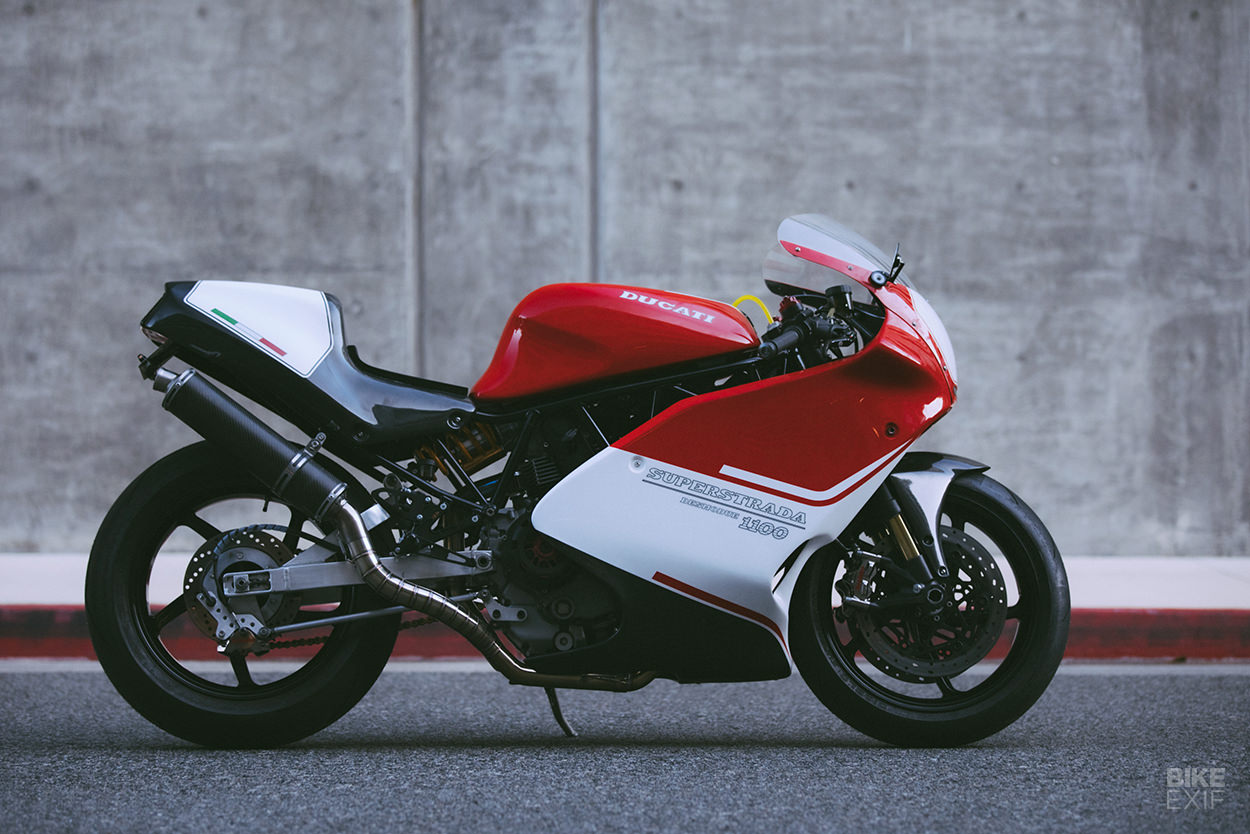 The paintwork and graphics are just as well judged as the mechanical upgrades: they’re a nod to the post-1985 ‘Cagiva era’ Ducatis, reworked with a slightly more modern feel.

We’re totally sold with the concept and even more with the execution. Now, if someone could produce a kit for the current Monster that captured this vibe … 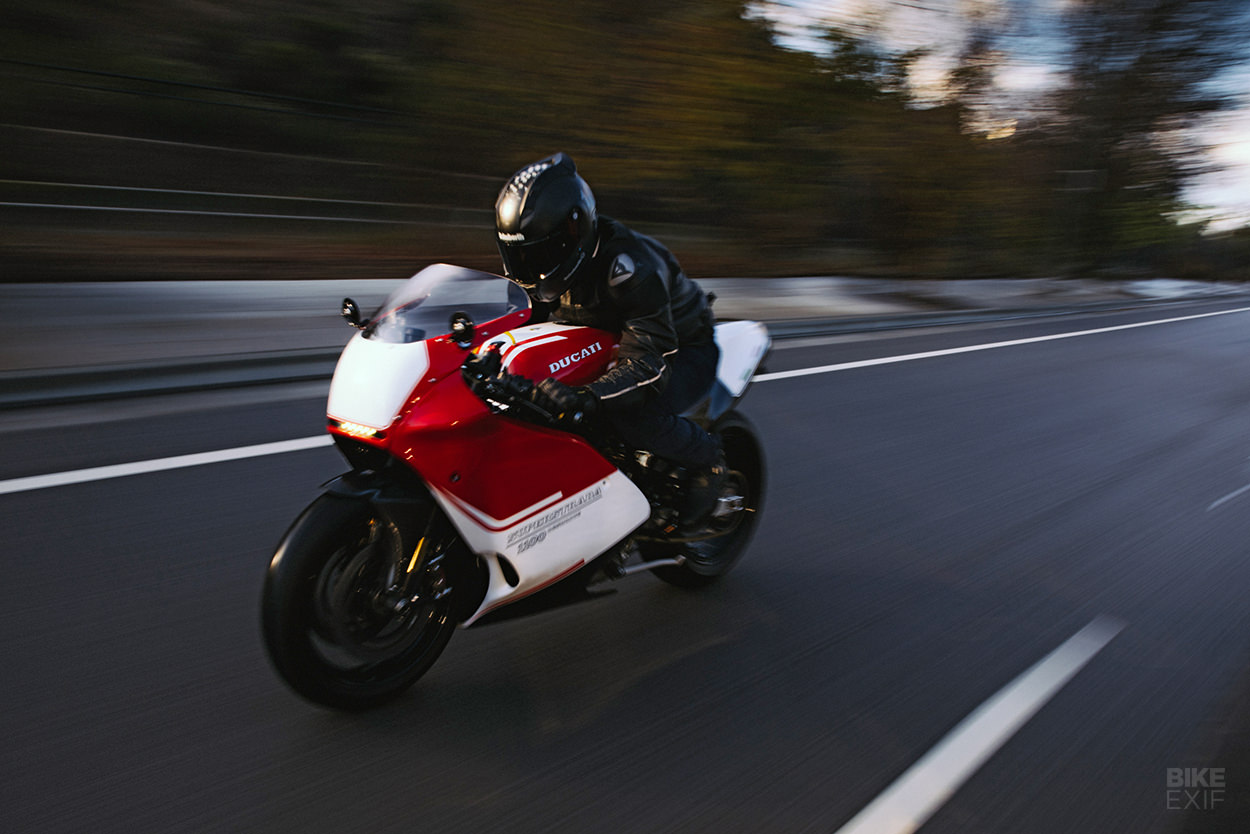