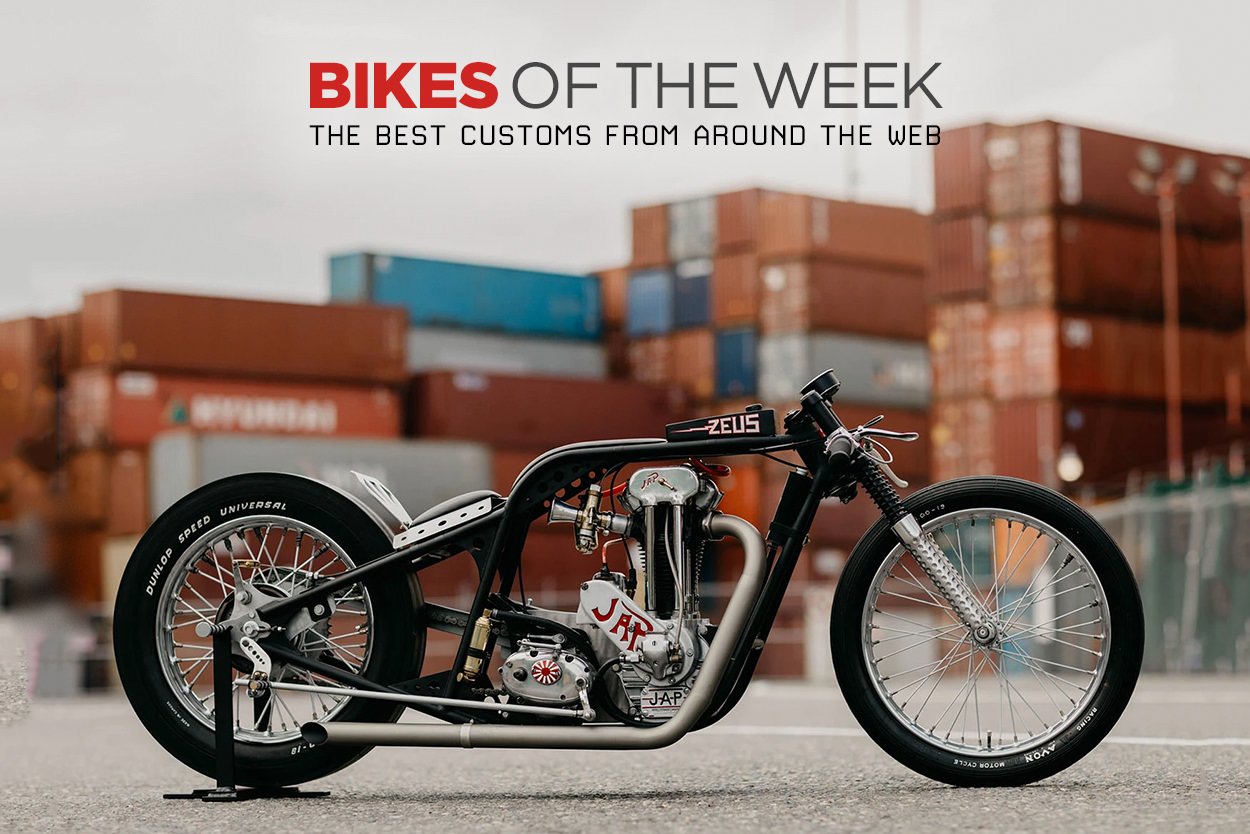 A jewel-like Hartford from Cowboy’s Chopper, a body kit for Royal Enfield Continental GT 650 owners, a killer vintage drag bike and a Ducati Paul Smart still in its crate. Now that would make a nice Christmas present, wouldn’t it? 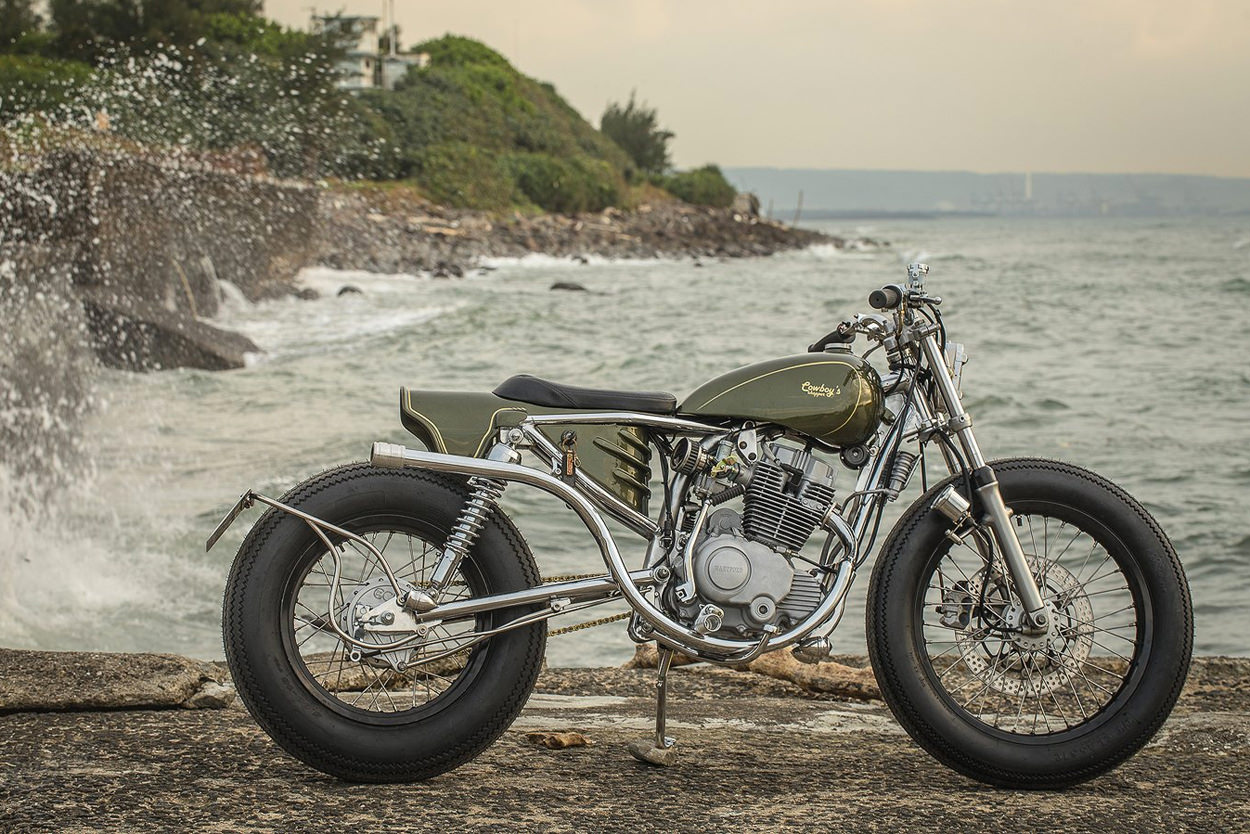 Hartford HD200 by Cowboy’s Chopper Taiwan has become a hot spot of custom motorcycle activity in the East, with shops like Rough Crafts and 2LOUD leading the charge. Now Alex Gao of Cowboy’s Chopper is becoming one to watch; this HD200 is top notch.

Made by the Taiwanese manufacturer Hartford, the HD200 is a rather pedestrian commuter that is now being exported to Europe too. But despite its budget bike status, Alex’s client was keen to see how far the envelope could be stretched. 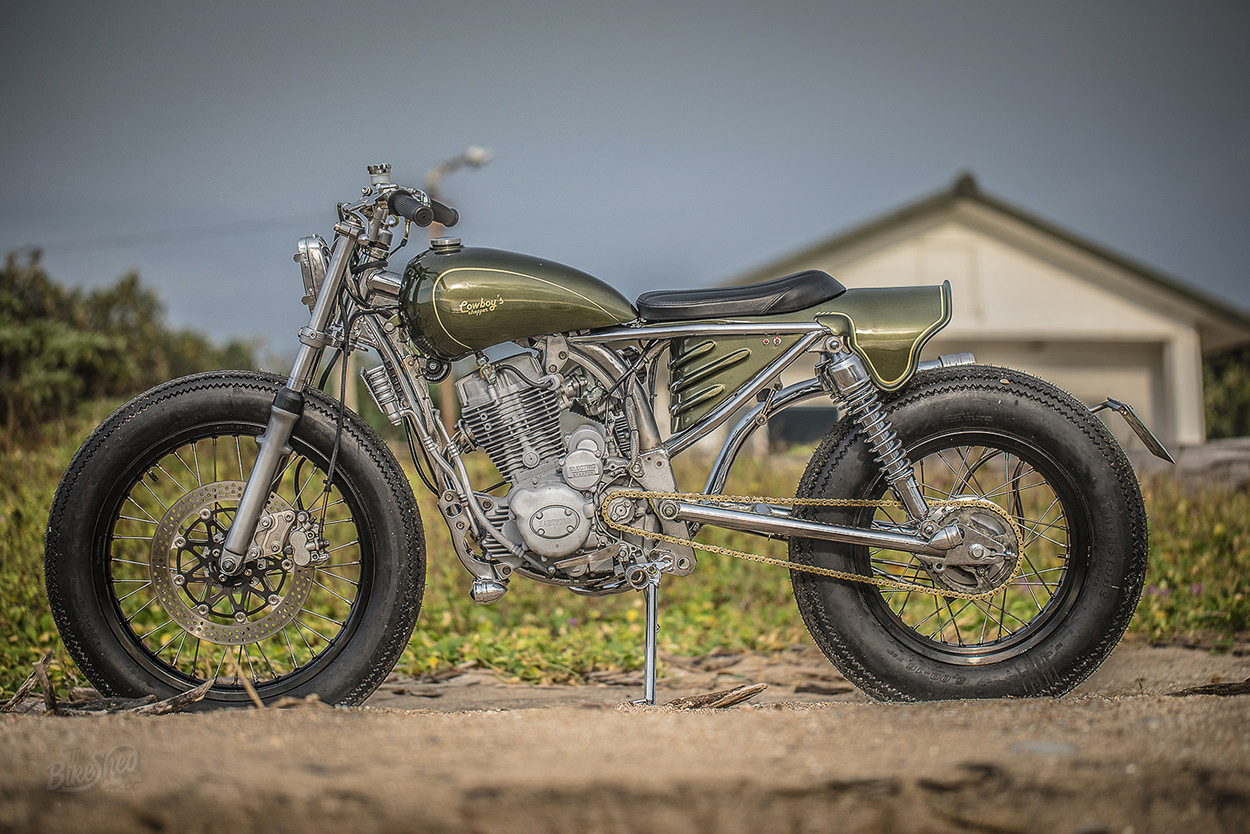 So Alex went all-out. This little Hartford now features a hand-made tank and tail section, and a detabbed and chromed frame. Those beautiful finned side panels hide the wiring, and Alex has placed one of his signature vertically mounted rectangular headlights up front. 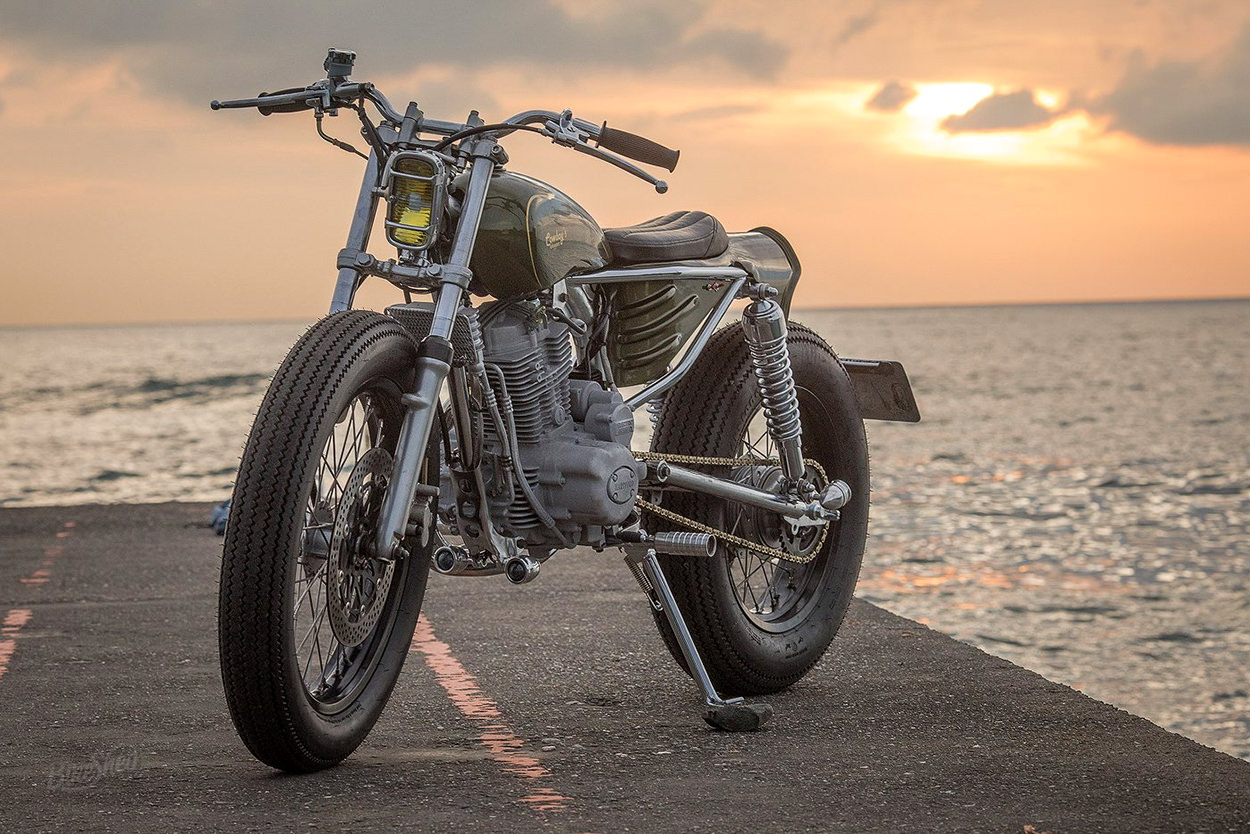 He also installed a 225 cc ‘big’ bore kit and a Keihin PZ30 carb to boost performance. And that swooping exhaust was made using a sand bending technique. As for the tires, while they look like Firestone Champion Deluxes, they’re actually knock-offs from a company called ‘F*ckstone’ … [More] 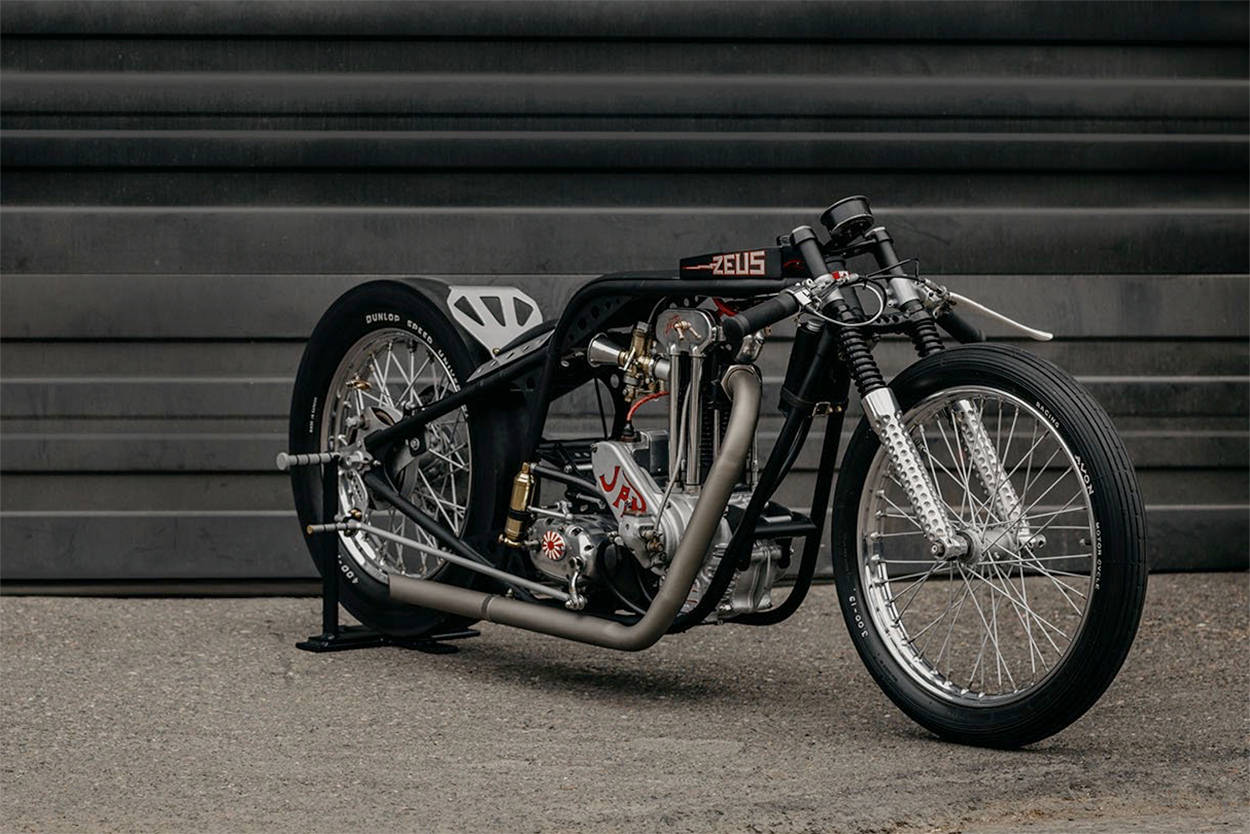 BSA/JAP drag bike by Kevin Busch When Kevin Busch was a kid, he used to sit on the remnants of an old BSA-framed drag bike in the corner of his grandfather’s shop. His grandfather was Jack Williams and the shop was Syndicate Scuderia, in Langley, British Columbia. And although Jack was a renowned car builder, it was the drag bike that piqued Kevin’s interest.

When the bike actually ran, it had a 500 cc JAP Type 6 single cylinder motor in it, and no brakes. (Where Jack used to race, there was more than enough run-off to slow him down). But Kevin didn’t know this until he was a teenager, and his grandfather showed him photos of the complete bike. 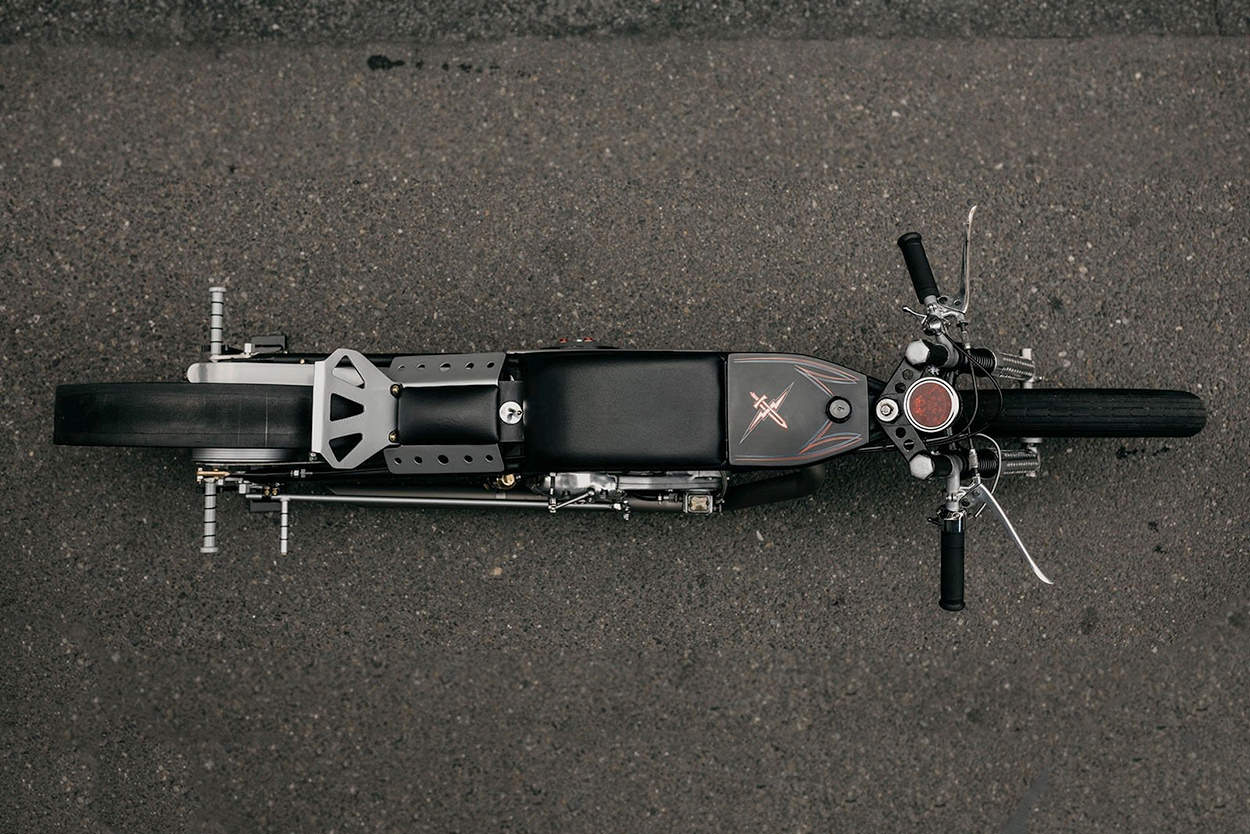 Jack passed away in 2014, but as much as he wanted to, Kevin just couldn’t gather the cash to buy the leftovers of his grandfather’s BSA-framer. He told the guy that bought it to give him a call if he ever decided to sell it—which he did, one year later. The sale included the bare frame, a pair of wheels, and the forks that Jack had originally drilled into (presumably to shave weight).

So the fact that this vintage dragster looks as good as it does now, is a testament to Kevin’s skill and dedication. Unable to find a Type 6 motor, he settled for a JAP Type 4B mill from a speedway bike. Then he made the primary cover, chain guard, linkage and seat from aluminum, and added a BSA drum brake at the back. 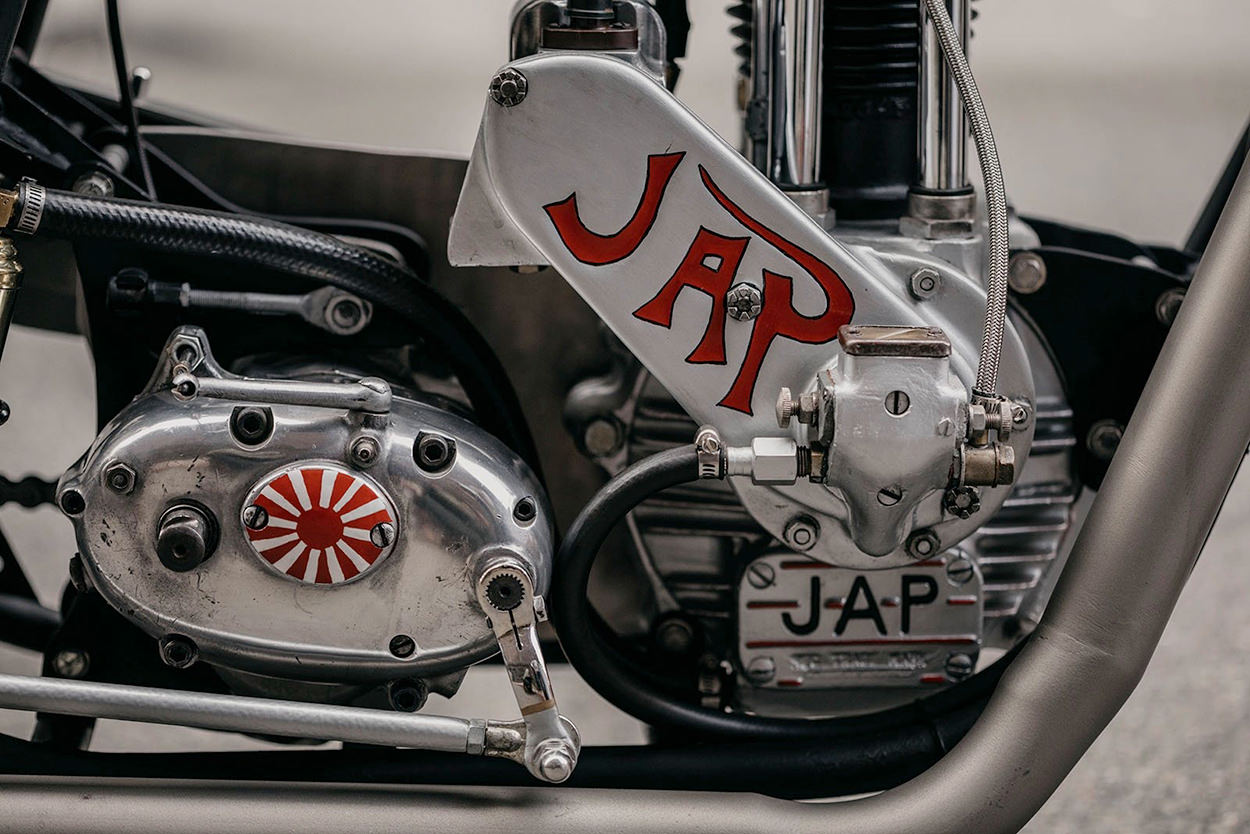 Kevin also gave the bike, dubbed ‘Zeus,’ period-correct Avon and Dunlop tires, and a brass Amal carb. But he hasn’t run the bike yet, because it actually needs an Amal methanol carb to run properly. With the wrong timing or incorrect fuel mixture, he could bend the valves or wreck the piston. There’s no telling when he’ll get that sorted either—he’s already got his hands full with a 1961 Triumph T120C Bonneville project.

There’s a lot more to the story; our friends over at Iron & Air have the full scoop and more images. 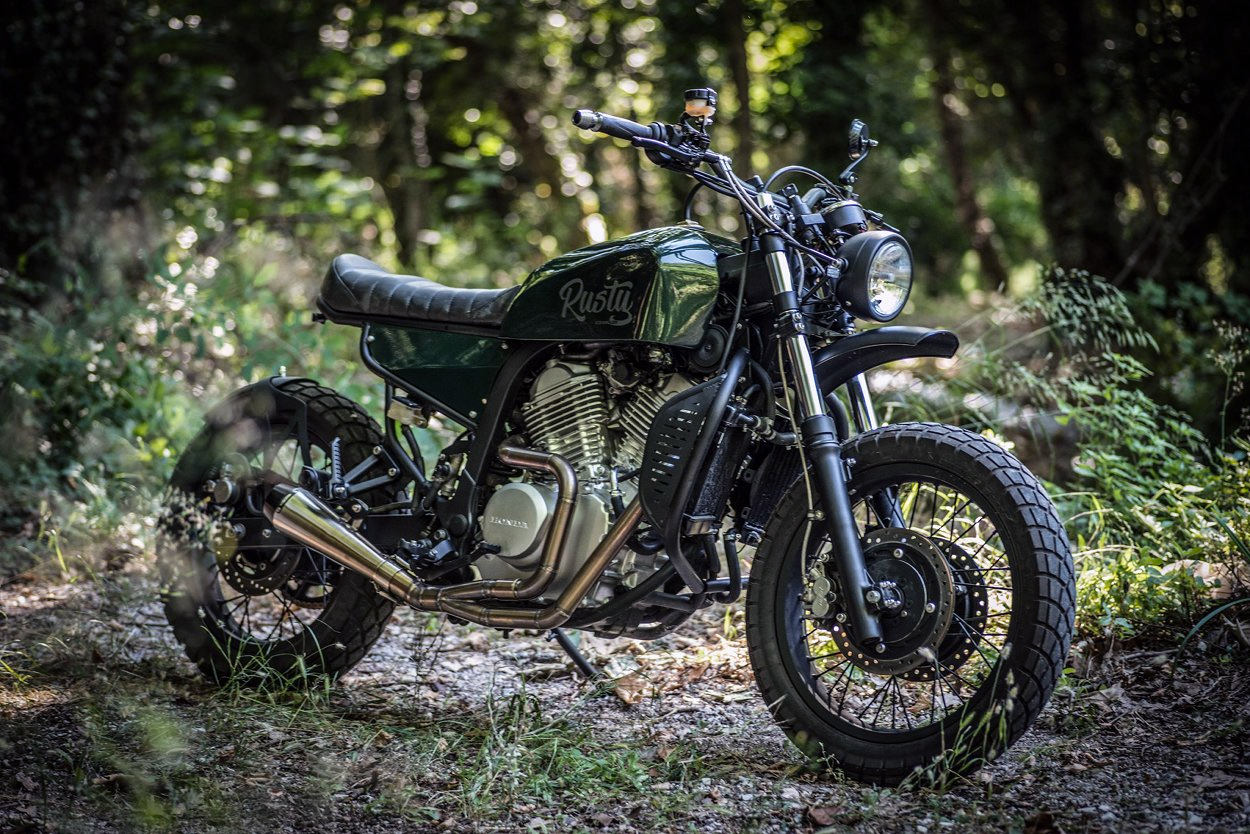 Honda XL600V Transalp by Rusty Pipes Garage First introduced in 1987, the Honda Transalp quickly made a name for itself as a robust, do-it-all workhorse. The first Transalp was a 583 cc V-twin that borrowed styling from the Paris-Dakar race bikes of the 80s, and some people love those older ‘600s’ even more than the later ‘650’ and ‘700’ models.

This is a 1994-model XL600V, and it’s been given the scrambler treatment by Leonidas Panagiotopoulos at Rusty Pipes Garage in Greece. It was built for a customer that already had the bike, but had grown bored of the stock looks. 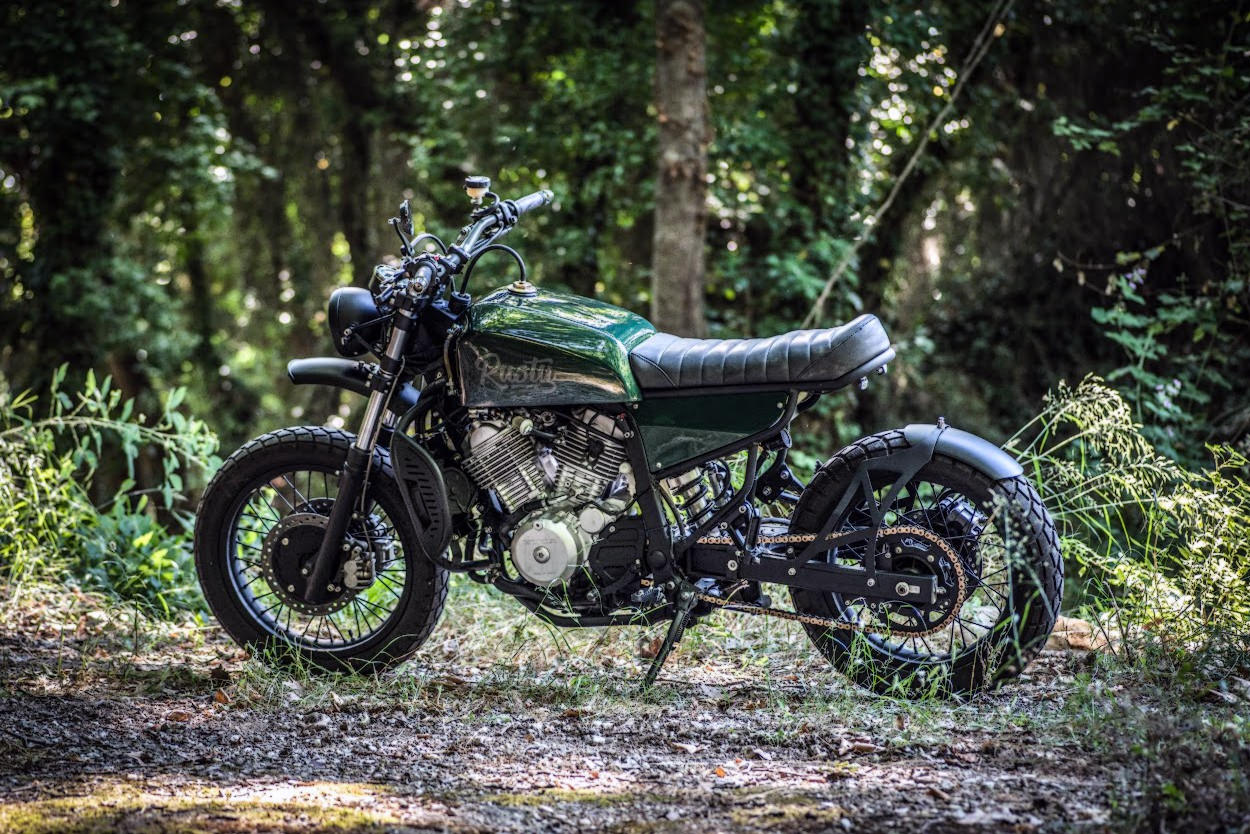 Leonidas started by switching the original 21” front wheel out for a custom-laced 18” unit. He made adaptors to run the stock brakes, and shortened the front forks a touch too. Out back, the stock subframe was cut-n-shut, and topped off with a new seat.

Leonidas is particularly proud of the fuel tank, because it’s the first one he’s built from scratch. Other custom touches include the old-school external fuel gauge, the side covers, and a set of burly radiator guards. There’s also a custom intake and exhaust, and a rear fender that’s mounted to the swing arm. It’s a far cry from the original Transalp, but it’s no less charming. [More] 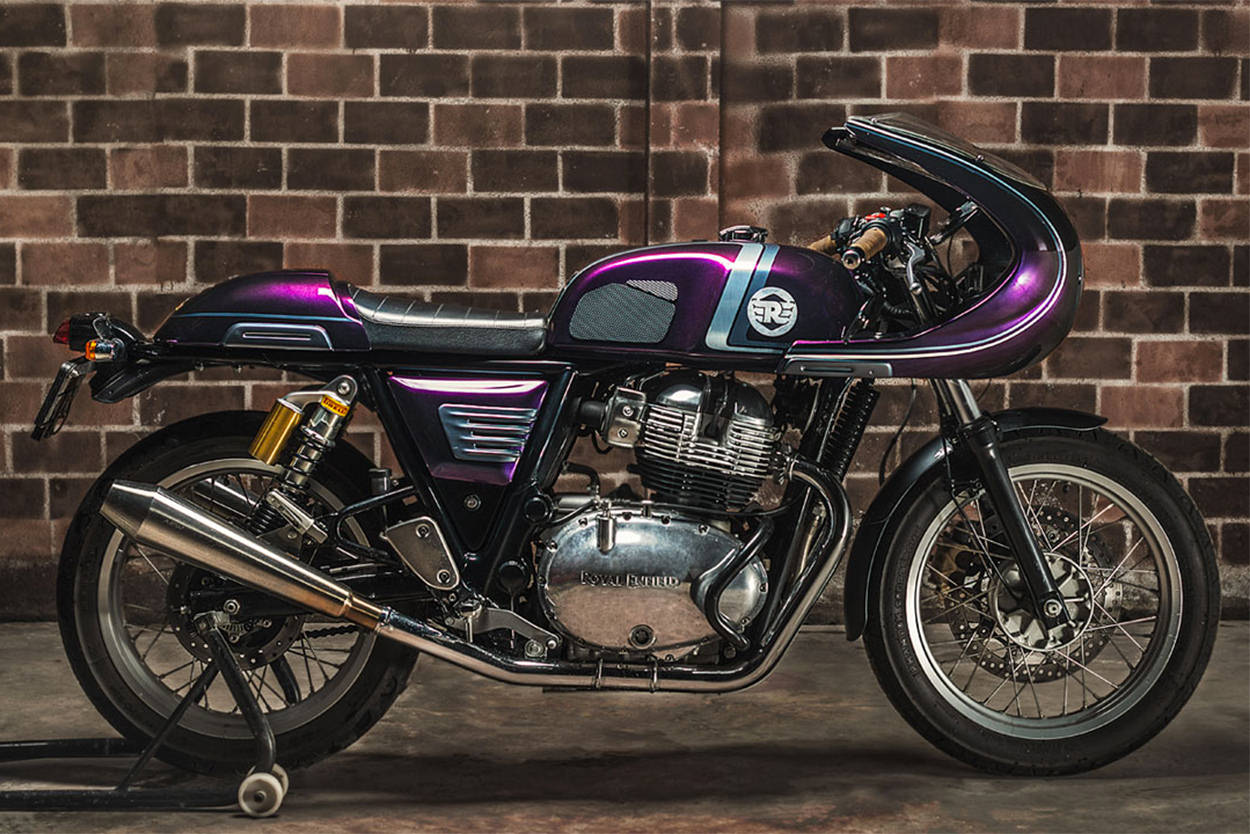 Autologue Design of Pune in India have just the thing. Their kit, dubbed RECK (Royal Enfield Cafe Kit) is a simple, yet elegant, upgrade. Taking cues from Triumph’s wildly popular Thruxton, the kit includes a fairing and tail section, and all the requisite hardware to fit them—making it truly plug and play. 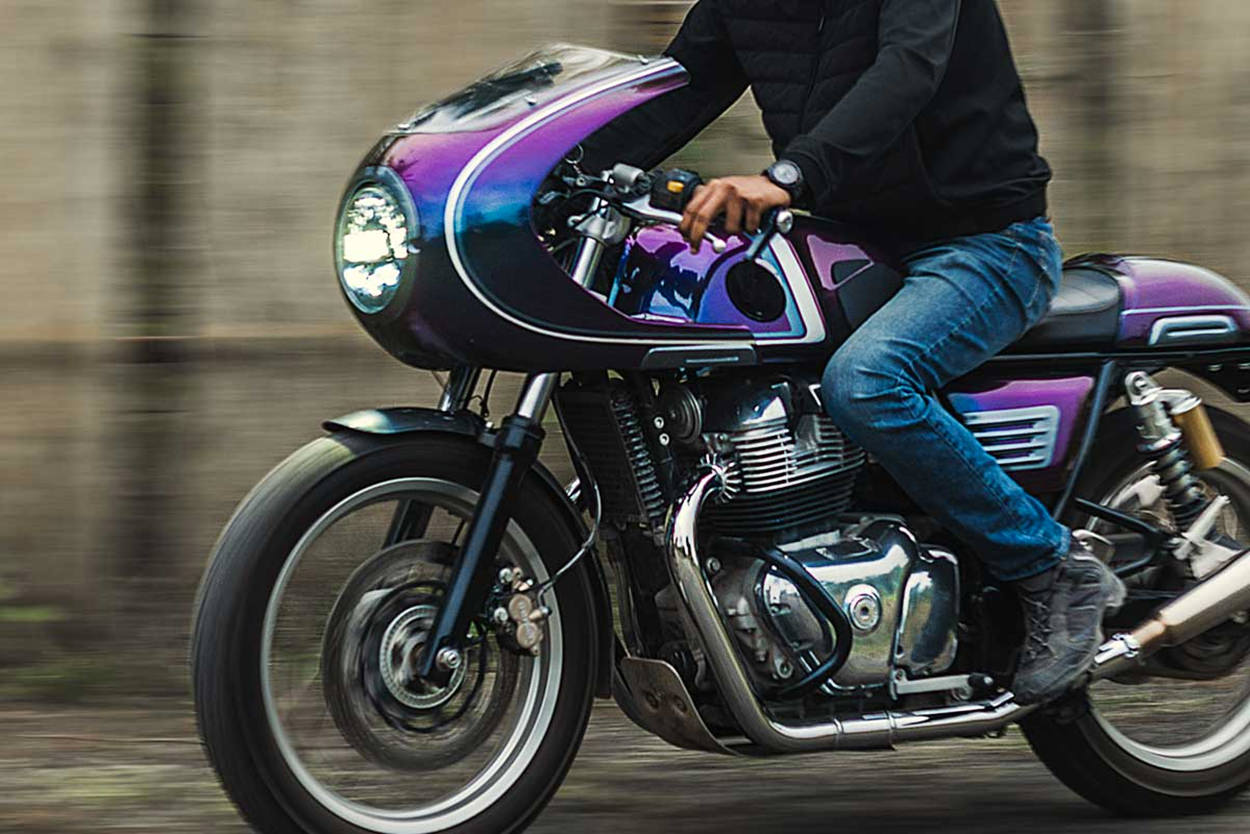 The parts were developed using contemporary digital techniques. First, Autologue did a 3D scan of the bike, then designed the parts using 3D software, and then 3D printed the prototype parts, before creating the final molds.

The bike you’re looking at here is their test bed and demo bike. In addition to the kit, it wears a few other new bits; a Motogadget speedo and mirrors, an LED headlight, and the taillight from a Royal Enfield Himalayan. The finned covers aren’t part of the kit, but they can be bought separately. Oh, and the flip-flop paint job is an especially nice touch too. [More] 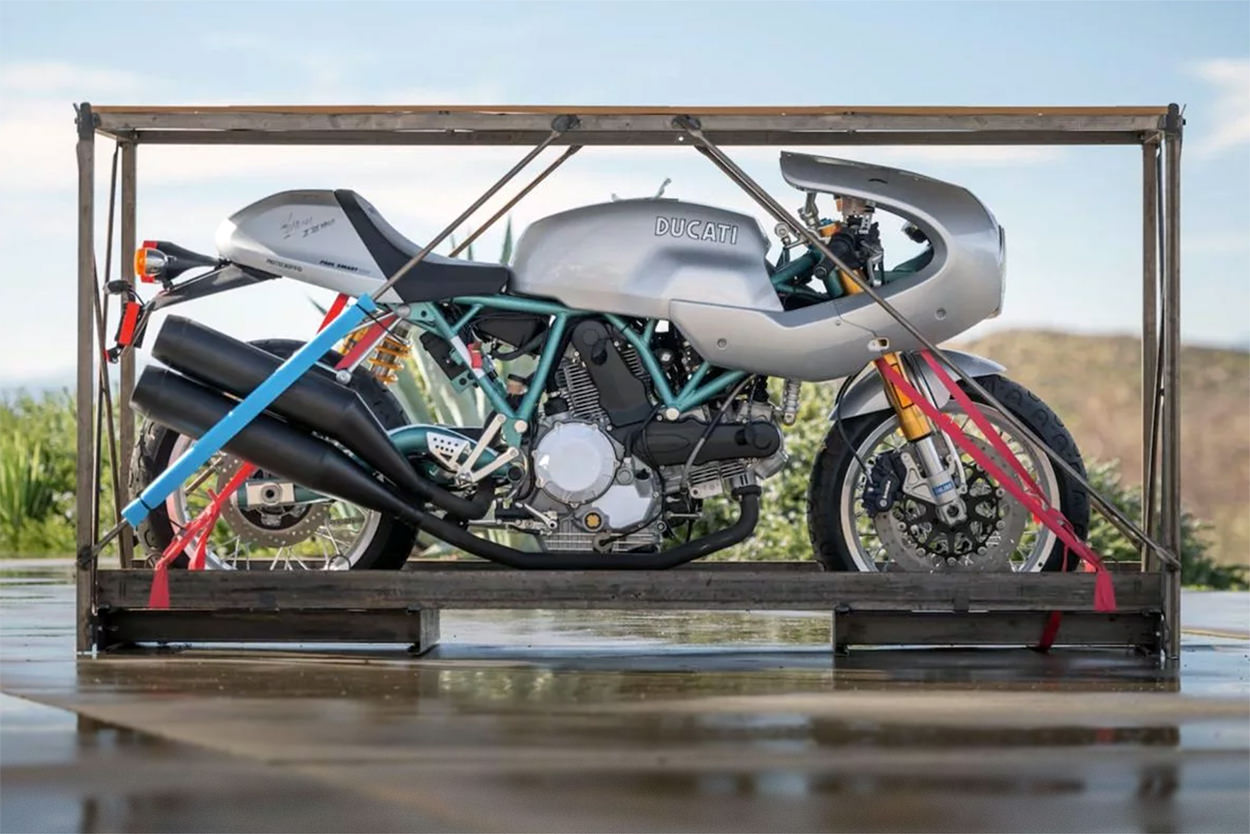 An in-the-crate Ducati Paul Smart 1000 LE Released in 2006, the Pierre Terblanche-designed Paul Smart 1000 LE was built to commemorate Paul Smart’s 1972 victory at the Imola 200. It’s arguably one of the most stunning stock motorcycles ever made, backed up by a decent parts spec and adequate enough performance.

The Paul Smart was based on the Ducati SportClassic, with a 992 cc L-Twin at its core, fuel injection and a six-speed transmission. You also got Öhlins suspension and Brembo brakes…but it was the Paul Smart’s looks that pushed it into uber-desirable territory. Between the turquoise frame, deep silver paint and period-correct logos, it’s still one of the best examples of a modern classic ever made. 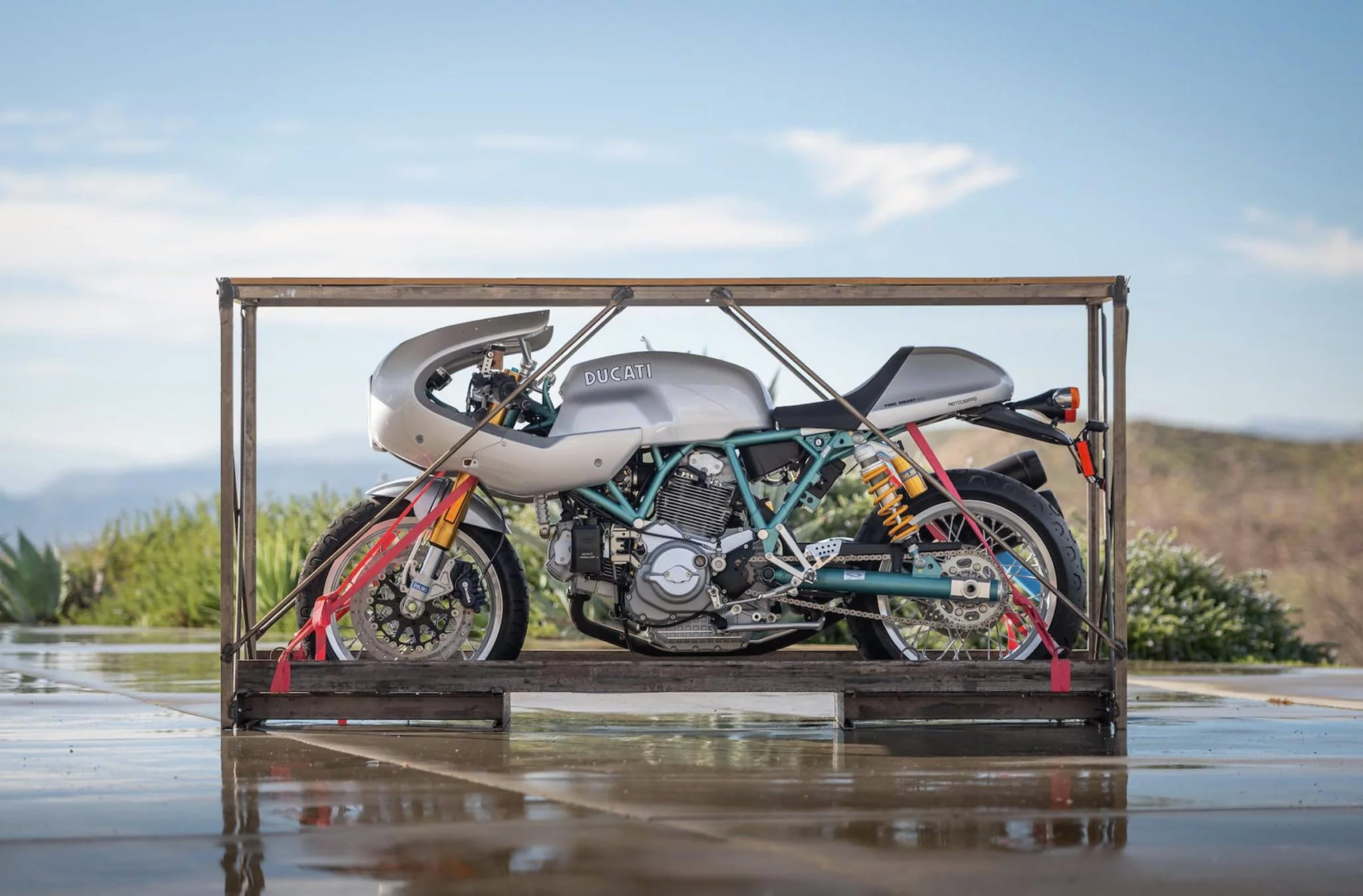 Ducati only built 2,000 Paul Smarts, and they’re so sought after now, that some have even appreciated in value. We doubt there’s a single example out there that’s worth what this one is though. You’re looking at an zero miles 2006-model Paul Smart 1000 LE, that’s still in its factory crate.

It’s never been started, and it’s never even been in daylight—so there’s not even a hint of sun damage on the paint job. The only thing that’s not 100% stock, is that it has three signatures on it: Paul Smart, Pierre Terblanche, and what looks like it could be Miguel Galluzzi’s. If you can scrape together between $25,000 and $33,000 at Bonhams, it could be yours. [Via] 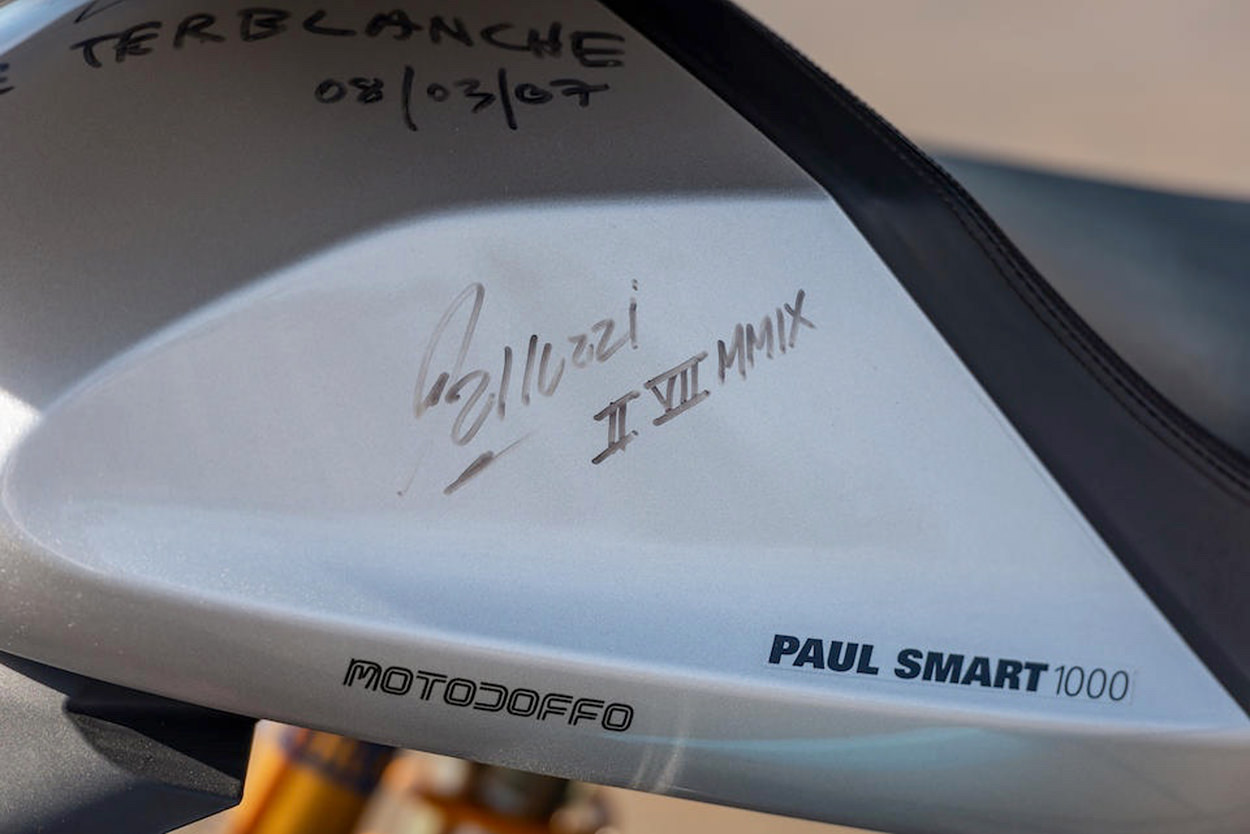