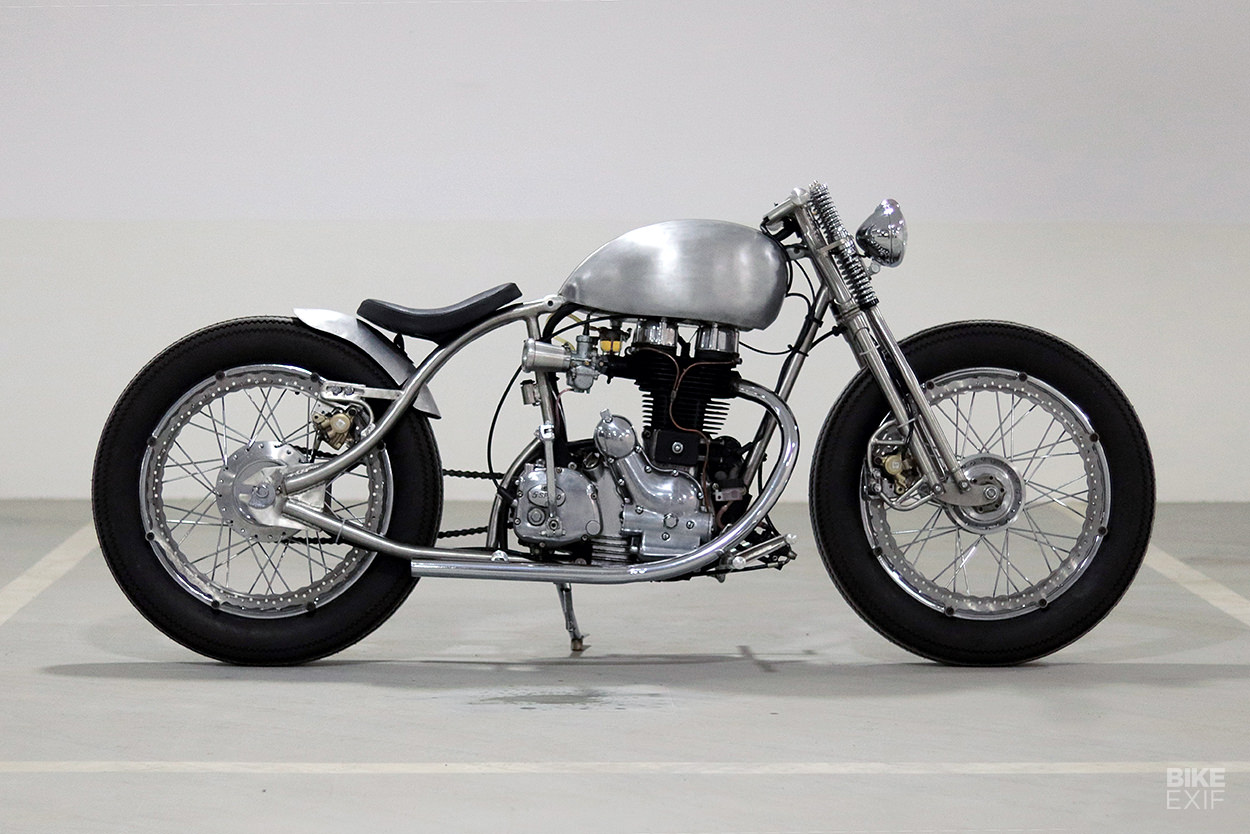 The past few years have seen a big change in the way a lot of custom motorcycles are created. Technology is everywhere, with many builders now using computer-aided modeling and machining to create and replicate parts faster and more accurately.

But some builders prefer to keep the traditional craft alive. In the USA guys like Craig Rodsmith and Max Hazan are wizards with traditional tools, and in India, we have Jay D. Patel of J&D Custom Co.—the builder of this raw and beautiful Electra 350. 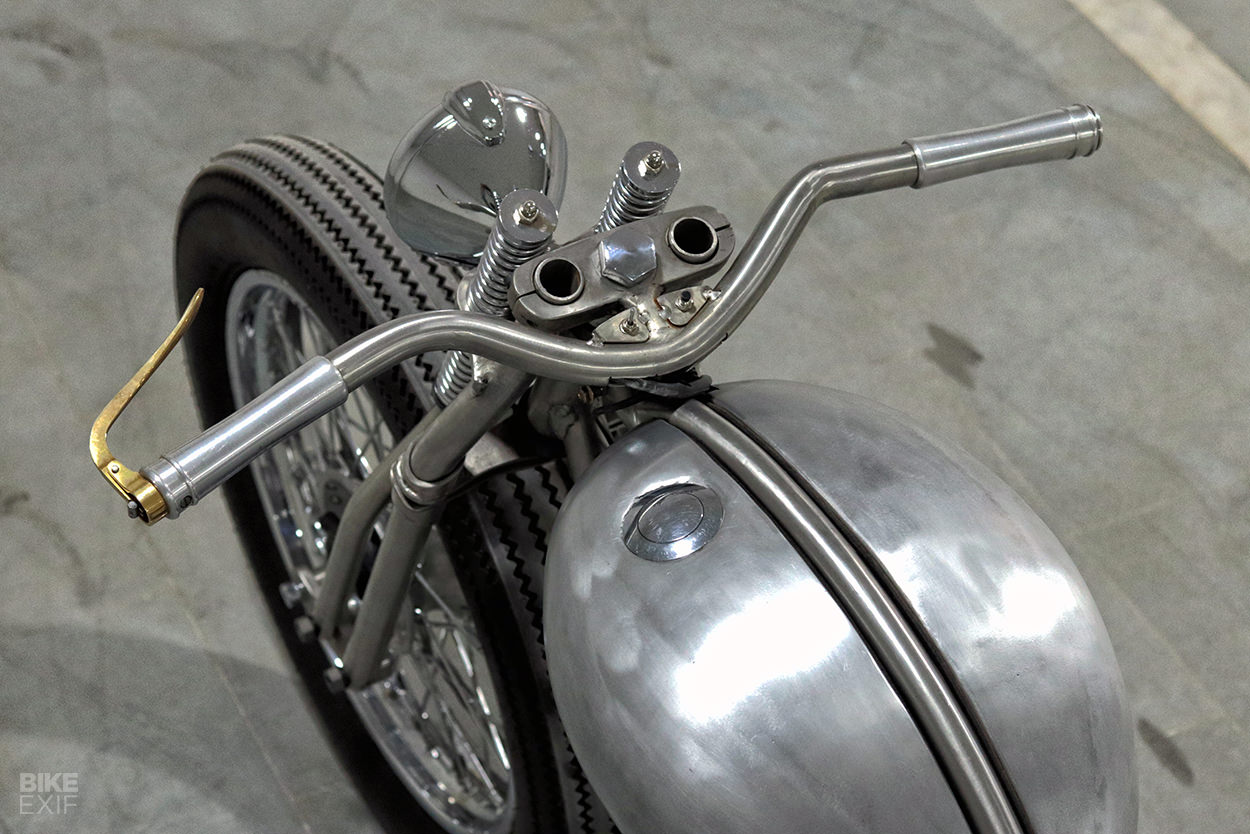 Based in Vadodara, a city in western India, Jay eschews digital assistants and sticks to decades-old methods of craftmanship.

“I’ve called the bike ‘Handmade,’ because I hand-built everything from scratch, apart from the the engine and wheels,” he tells us. 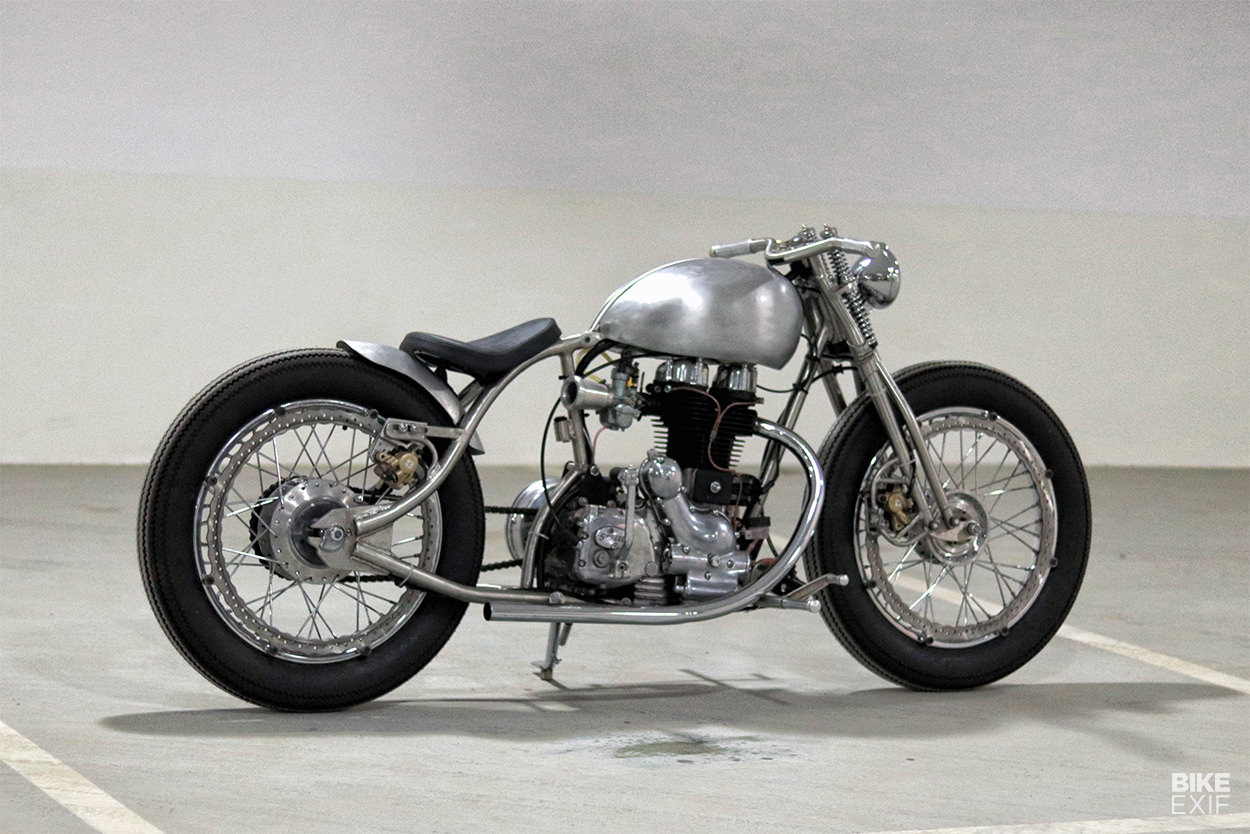 Jay’s father owns an engineering workshop, and that’s where Jay learnt fabrication and other technical skills. The litmus test was restoring his dad’s Land Rover Defender: “One of the greatest experience of my lifetime! It taught me a lot of lessons.”

Jay quickly moved on to building custom motorcycles from scratch, and first caught our eyes about three years ago with his ‘Baroda Bobber,’ based on a Royal Enfield Thunderbird 350. 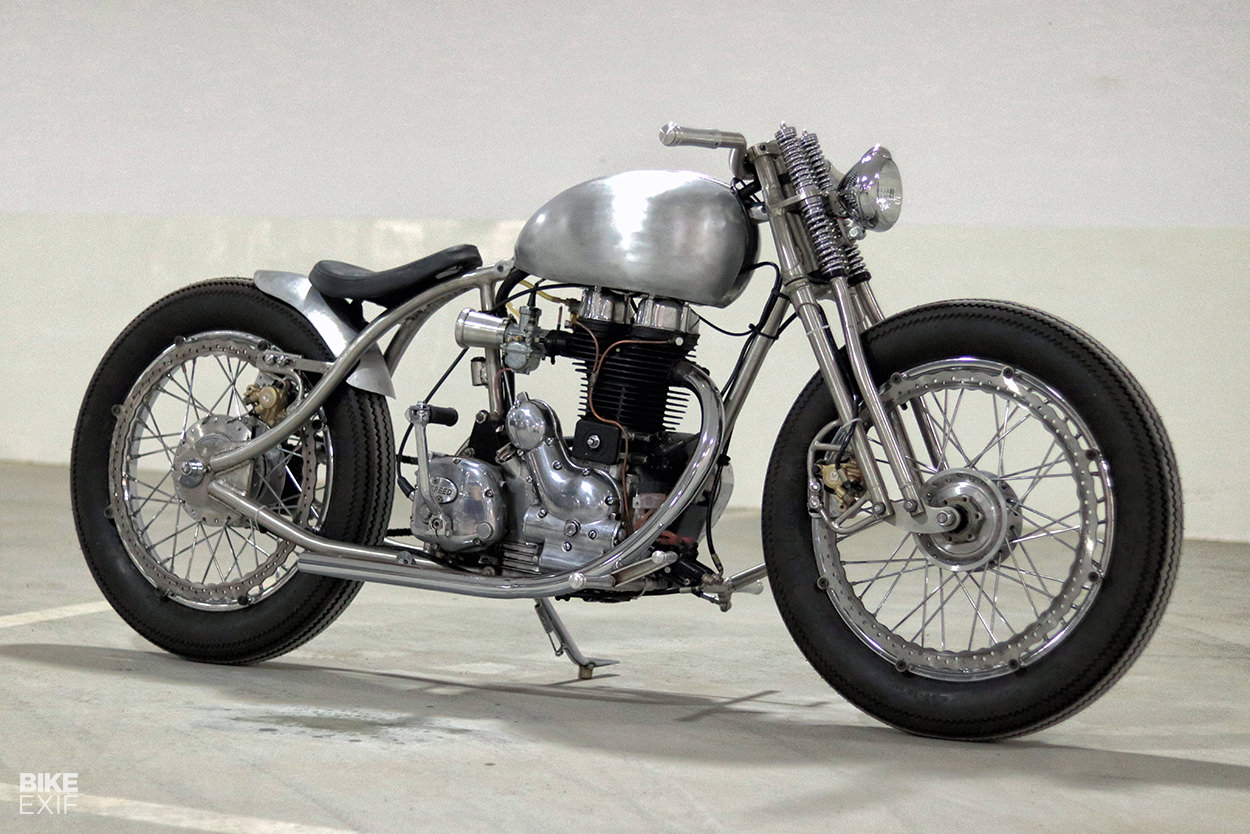 He’s now honed his skills still further with this compact and elegant Bullet Electra, which was RE’s best-selling model for many years.

“The concept for this bike was to showcase the true craftsmanship of building,” says Jay, “without ‘layering it’ or hiding anything. Whatever I have learned in the past five years, I have tried to implement in this build. It’s a pure labor of love, representing the era of motorcycle development in small garages—without any high tech tools or software.” 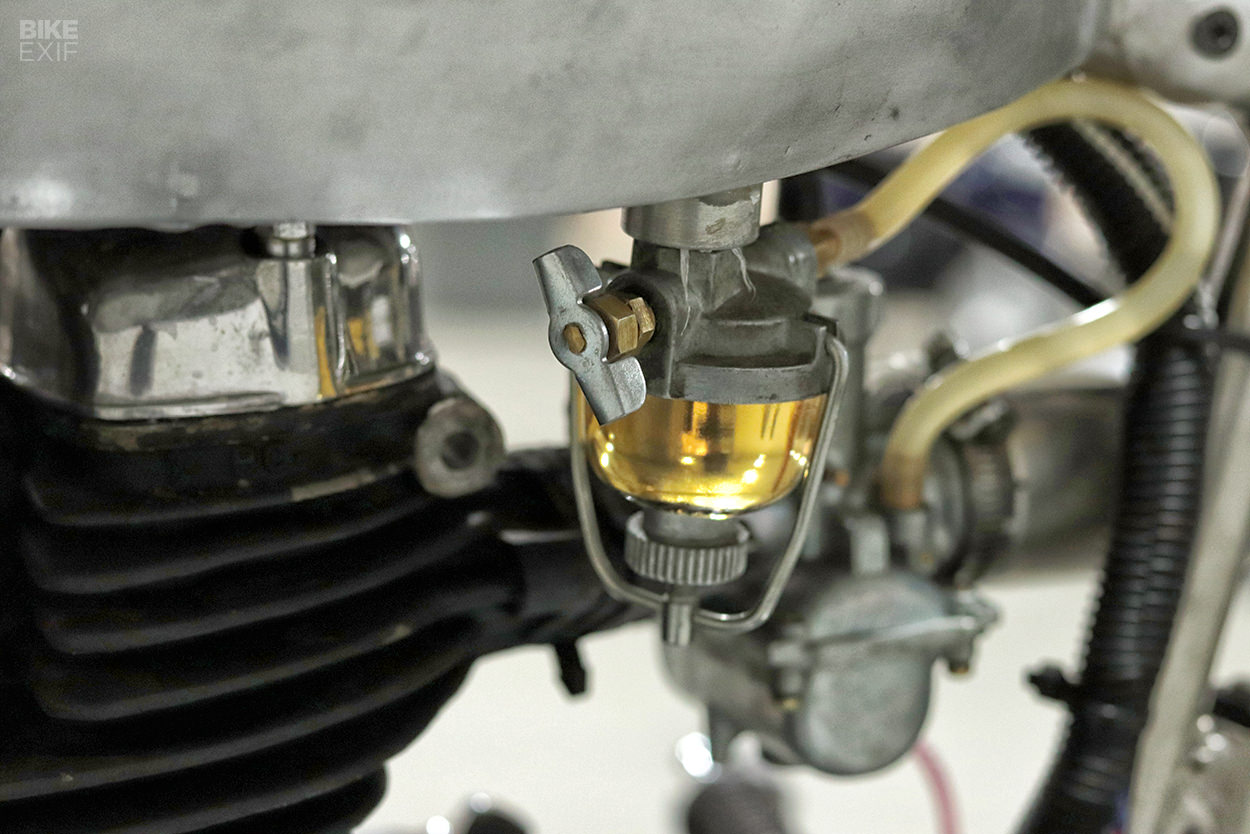 For bike builders, it’s critical to have clients who are ‘on the same page,’ and Jay got lucky with the guy who commissioned this bike. “He follows the same work and design philosophy as me,” says Jay. “He’s a well known architect and designer who works with brass and wood, and admires hand-built things the most.”

He approached Jay after seeing the Baroda Bobber build. “We decided to do the next expression of that build, using my improved skills to achieve better results in terms of craftsmanship.” 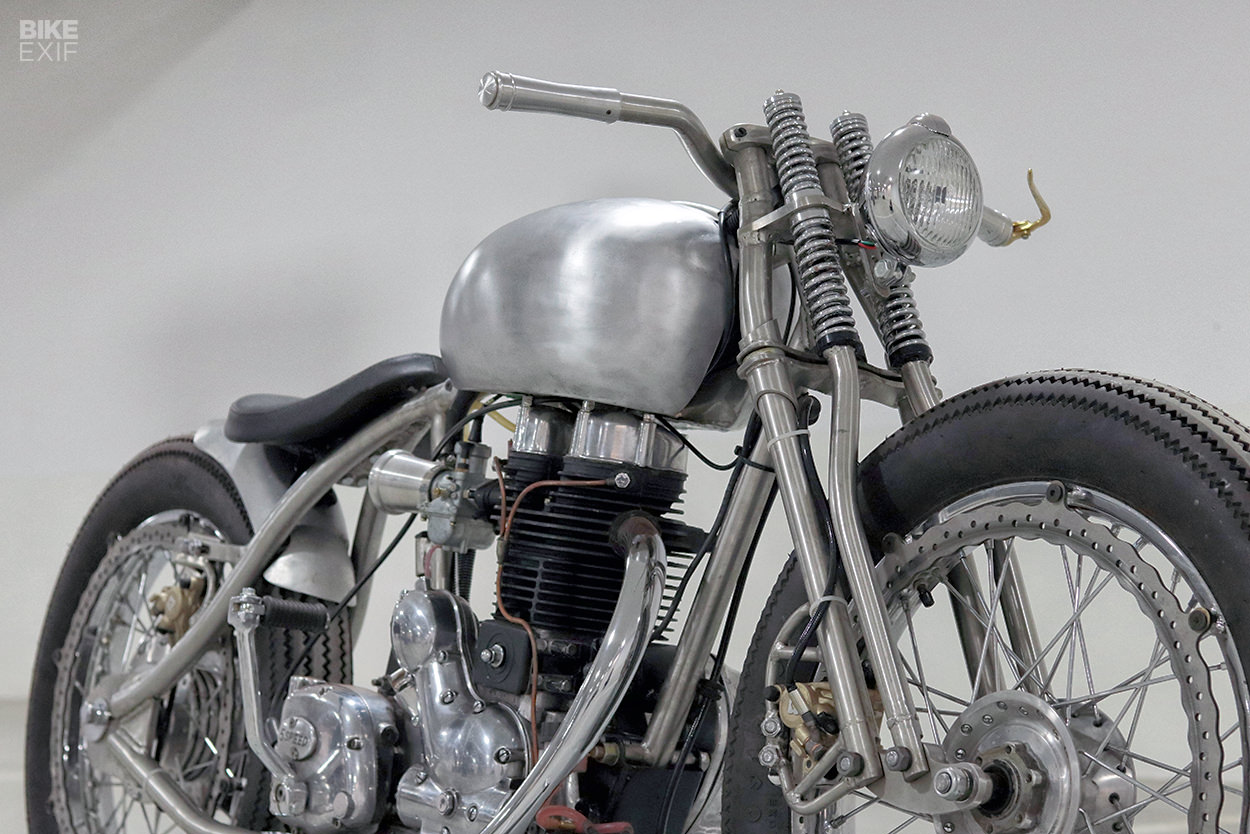 This is Jay’s first full-frame build, and he’s used 304 seamless stainless steel tubing. “I did some research and made a frame jig to perfectly align the frame,” he recalls. “But as I was used to working without professional tools, I ended up only using the jig for joining the neck to the front rail.”

While crafting the frame, Jay started figuring out the dimensions for a springer fork setup. “It was my dream to build a springer front end: I wanted to spend a good amount of time to make it perfect in the working sense, as well as aesthetics,” he says. 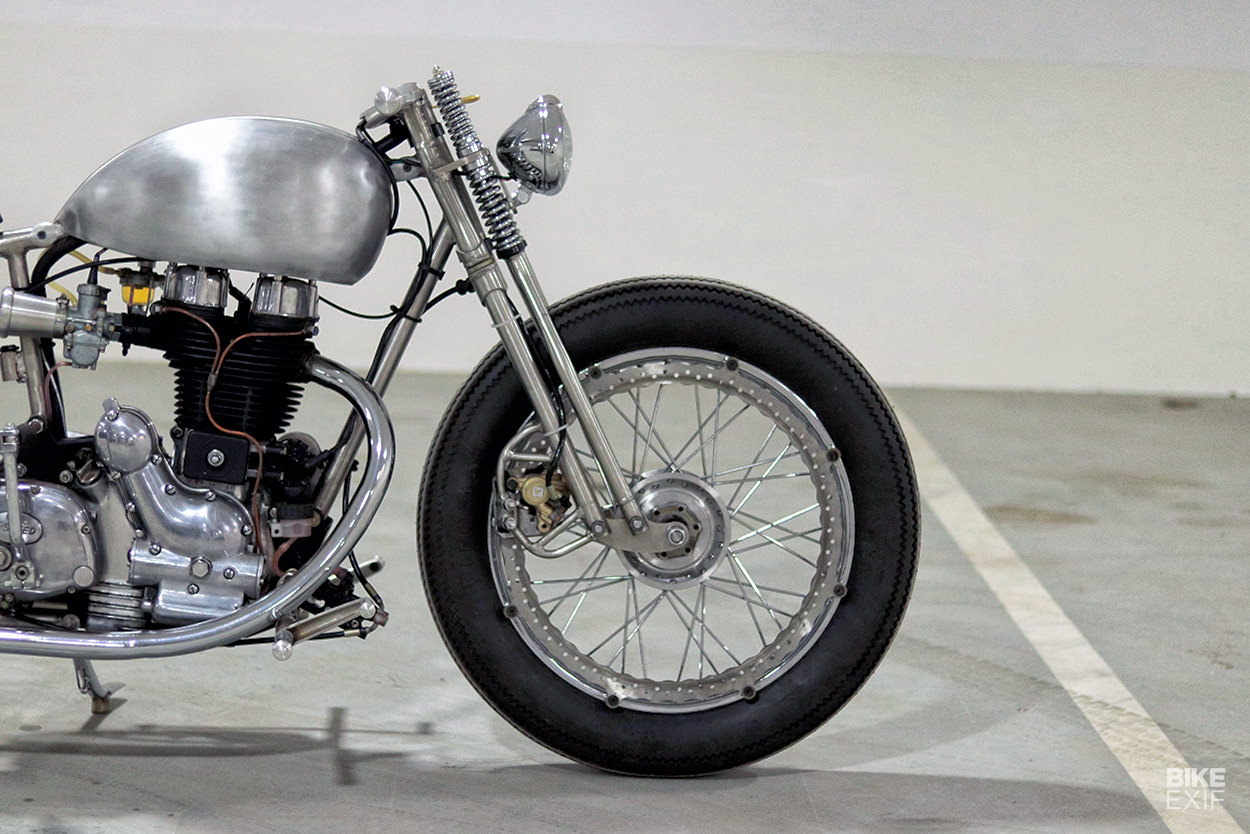 Luckily, Jay got it close to perfect in his very first attempt, and he reckons it’s the most beautiful part of the build. It’s also made out of 304 stainless steel, with the springs coming from a local specialist, built to Jay’s specs.

Then Jay started working on the shape of the tank, splitting the unit into two portions, to make it easier to hide electrical items and the battery. 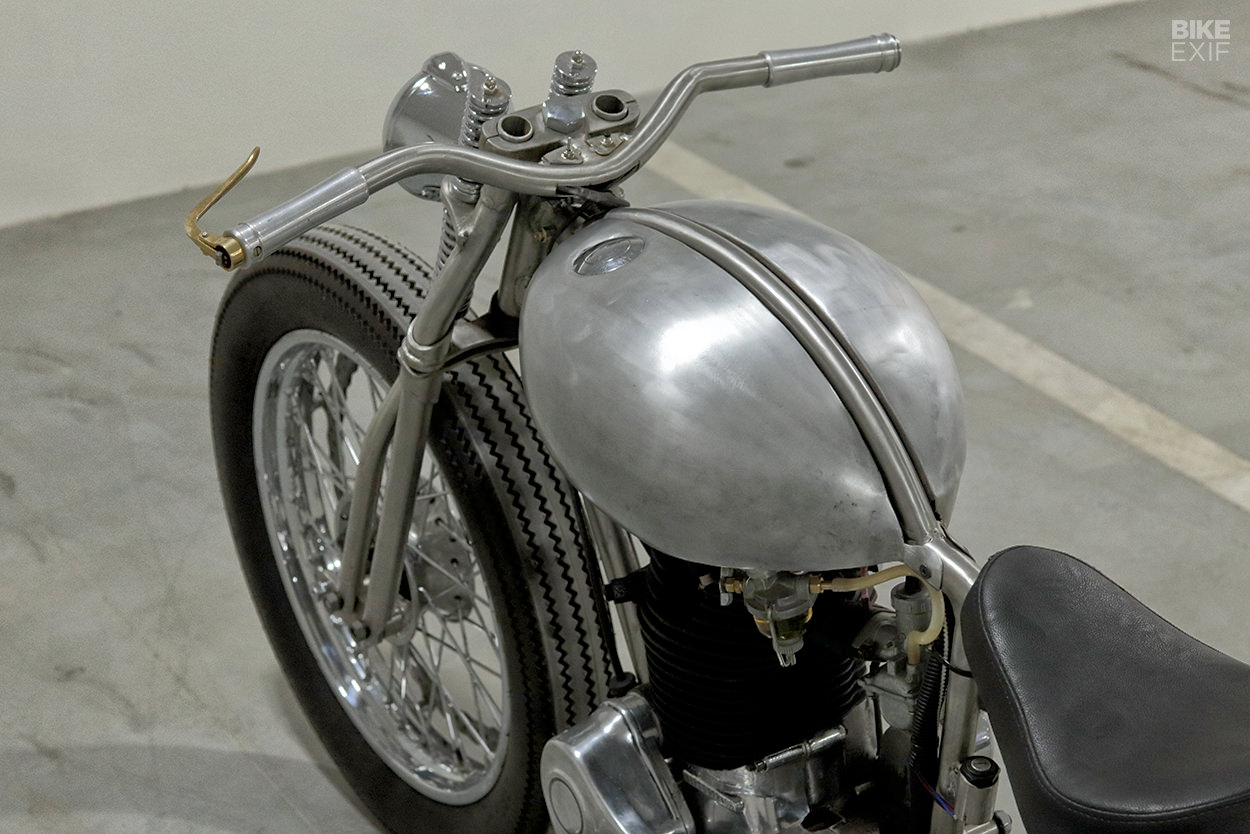 The left side portion is the actual fuel cell, which can hold around six liters (1.6 gallons), while the other half is a cover to hide all the electrical gear. There’s a pop-up gas cap to keep the lines clean, and the fuel petcock is an antique item that Jay found on Amazon.

For the rear portion of the frame, Jay wanted to try something different to the usual hardtail frame. After figuring out the curves and axle plate placement, he cut the backbone and grafted on two rear pipes. It’s a simple and seamless look. 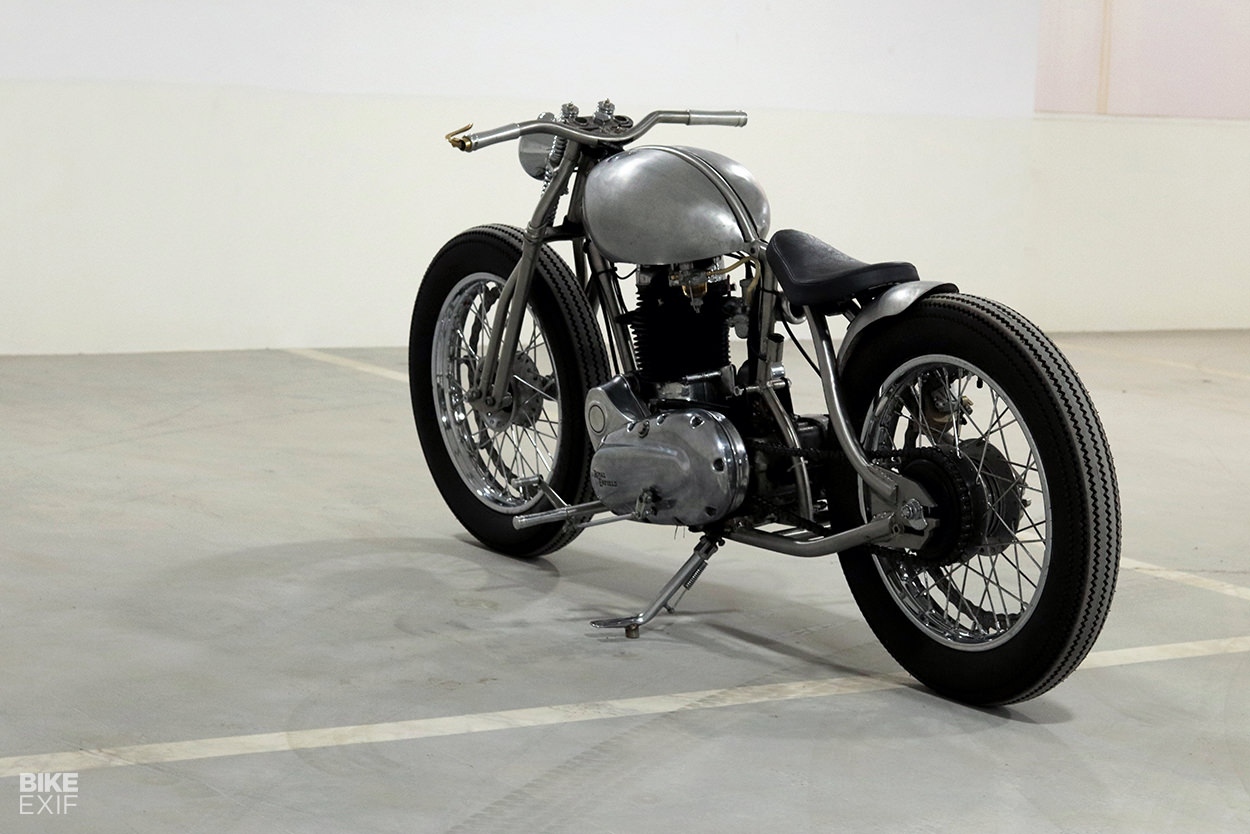 The arc welding is just as neat. “I tried to make every weld perfect, so that I don’t need to grind them to look good. I just left the welds as they are, to look real raw.”

To keep the bars clean, Jay has used an internal throttle assembly and inverted clutch cable setup. “But since I was using an internal throttle, it wasn’t possible to use an inverted lever for the front brake setup,” says Jay. “And hydraulic brakes can’t work that way. So I decided to link both the front and rear brake operations using a single foot pedal.” 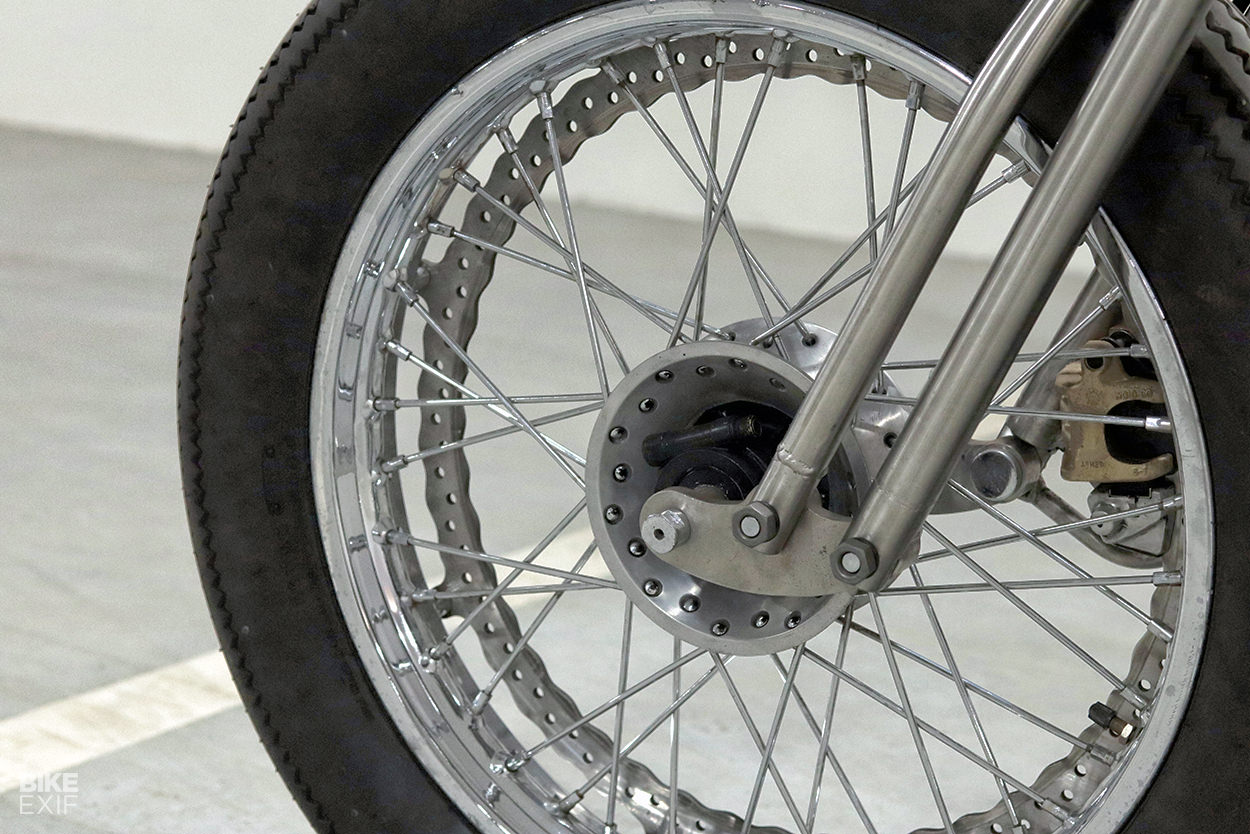 Jay used a perimeter disc brake setup for the Baroda Bobber, which he believes is the only one of its kind in India—as well as unique for an Enfield. So he’s replicated the setup on the Electra, to give the build a signature touch.

Jay has also made the hand and foot controls, using aluminum and a lathe. The velocity stack air filter is made out of a solid bar of aluminum too. 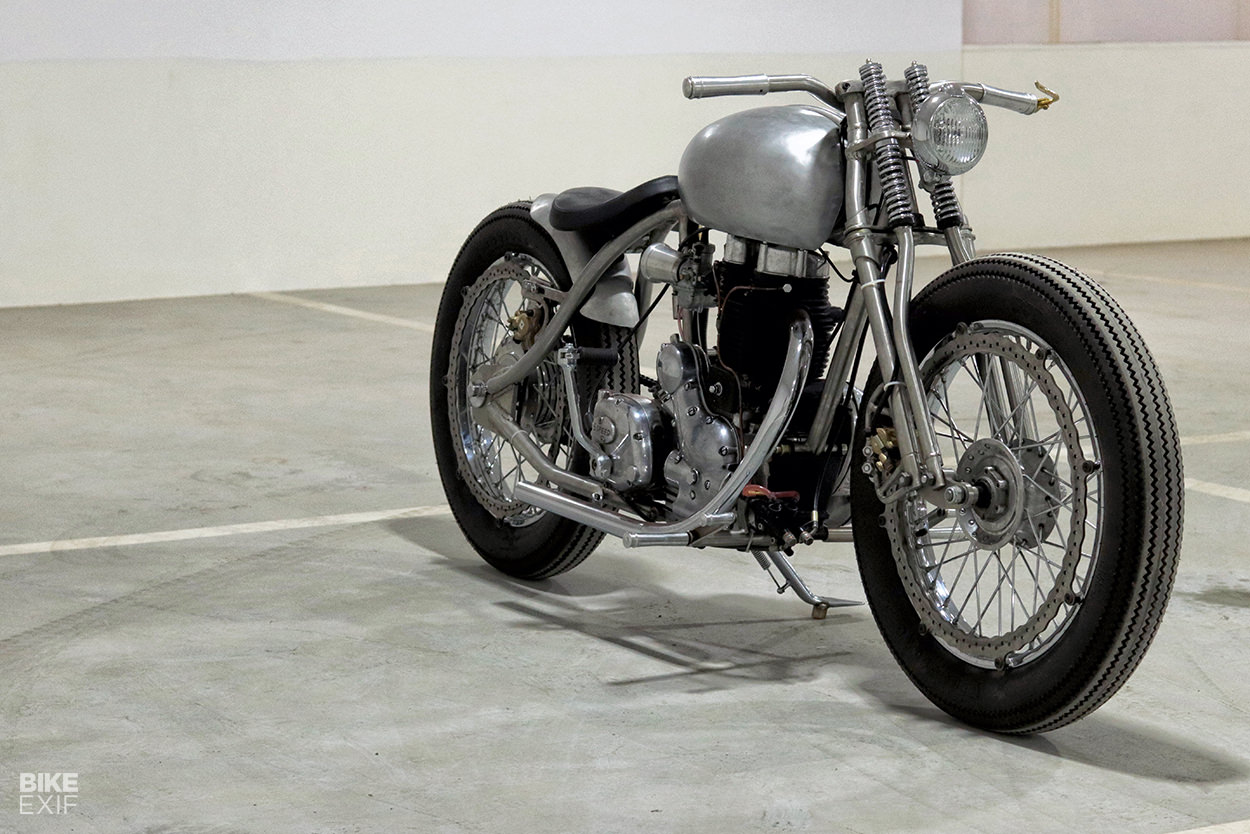 The 19-inch wheels are one of the few stock fitments, and the exhaust is an original Enfield part too. “I just love the flow of the stock bend pipe,” Jay explains. “I had to cut it in the middle and re-join it at a specific angle to match the lower frame lines, though.”

We love the understated style of this machine, and the way it has been crafted bit-by-bit, without so much as a Photoshop sketch beforehand. “I don’t work with renders or drawings,” says Jay. “I do that process in my head, and start putting elements together one by one, to achieve the final design.” 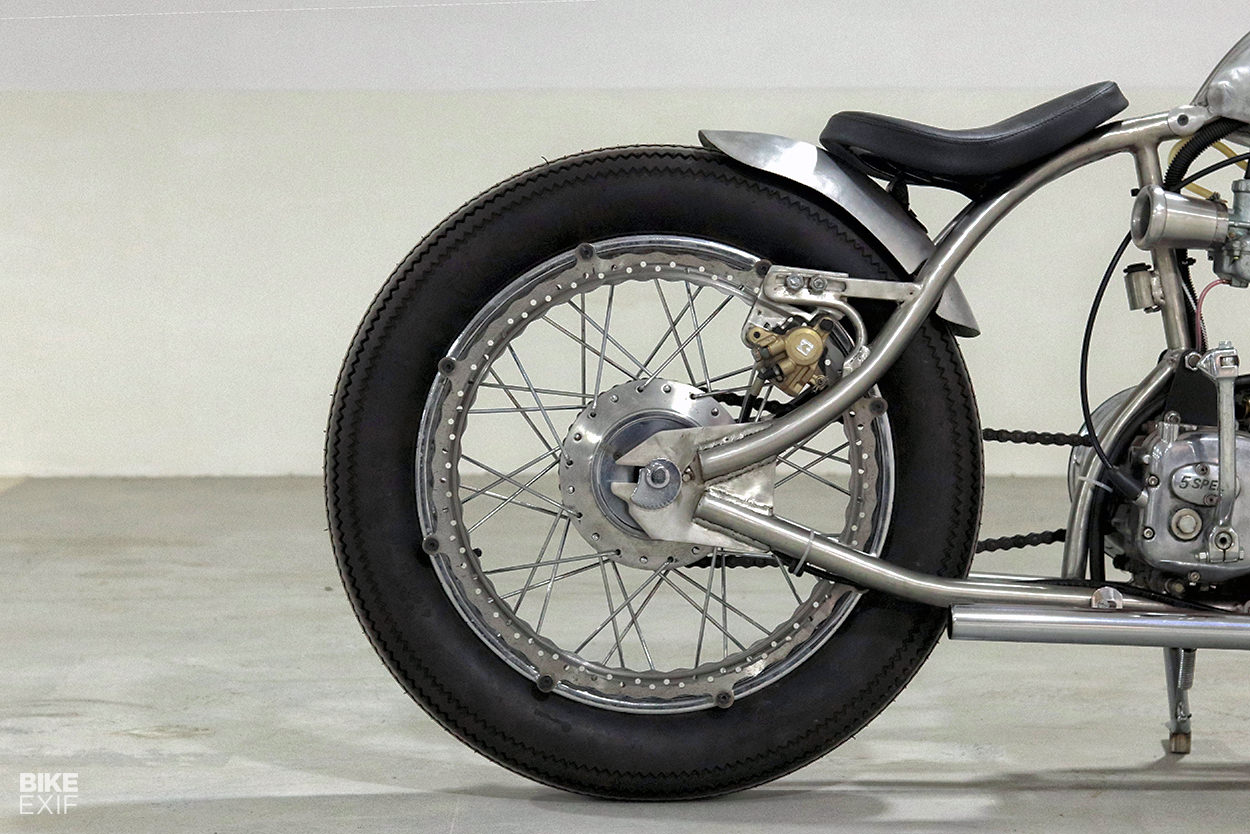 It’s a brave builder who leaves his bikes unpainted, but Jay has the skills to pull it off. “For me it shows the craftsmanship of the builder. There are no layers of filler or anything, and you can see all the joints, welds, bends and lines.”

We’re all for pushing the boundaries of modern tech, but we also love to see that traditional skills are alive and well too—a refreshing touch of analog warmth in an increasingly digital world. 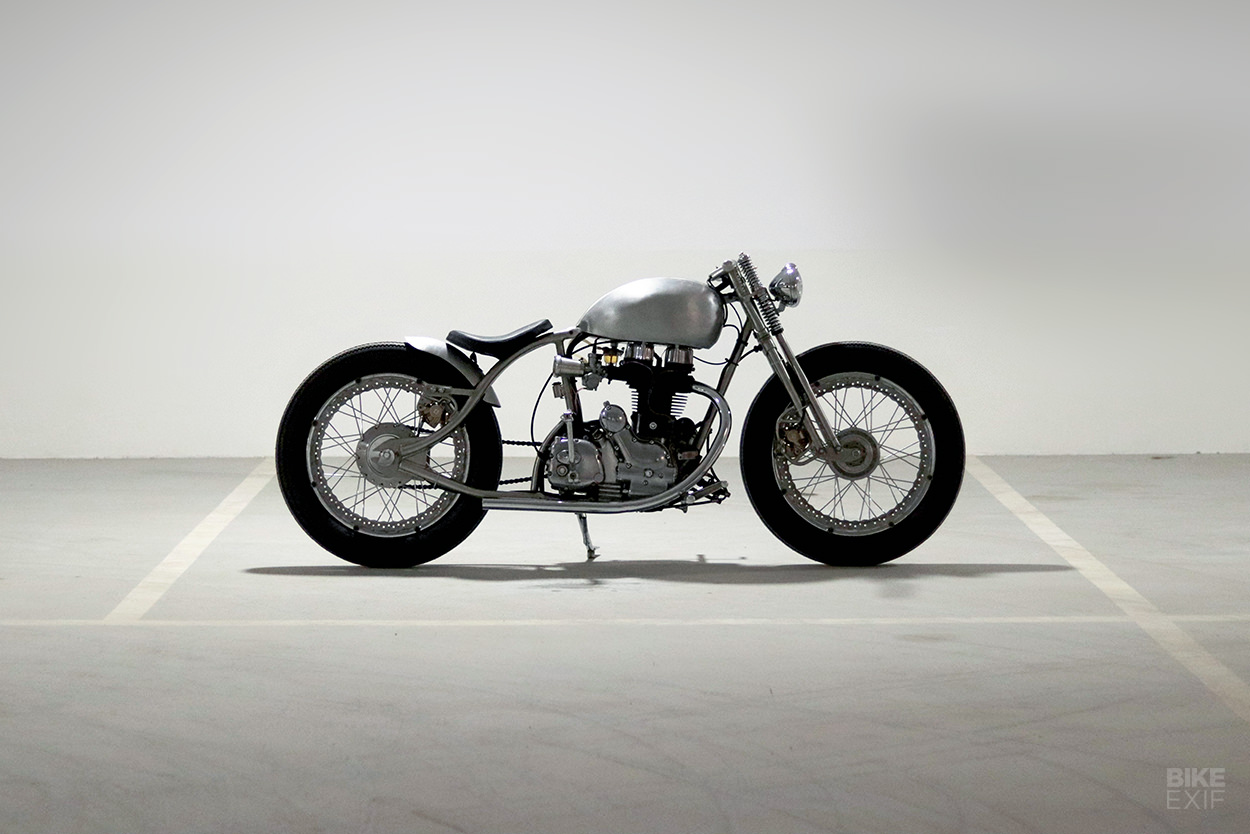