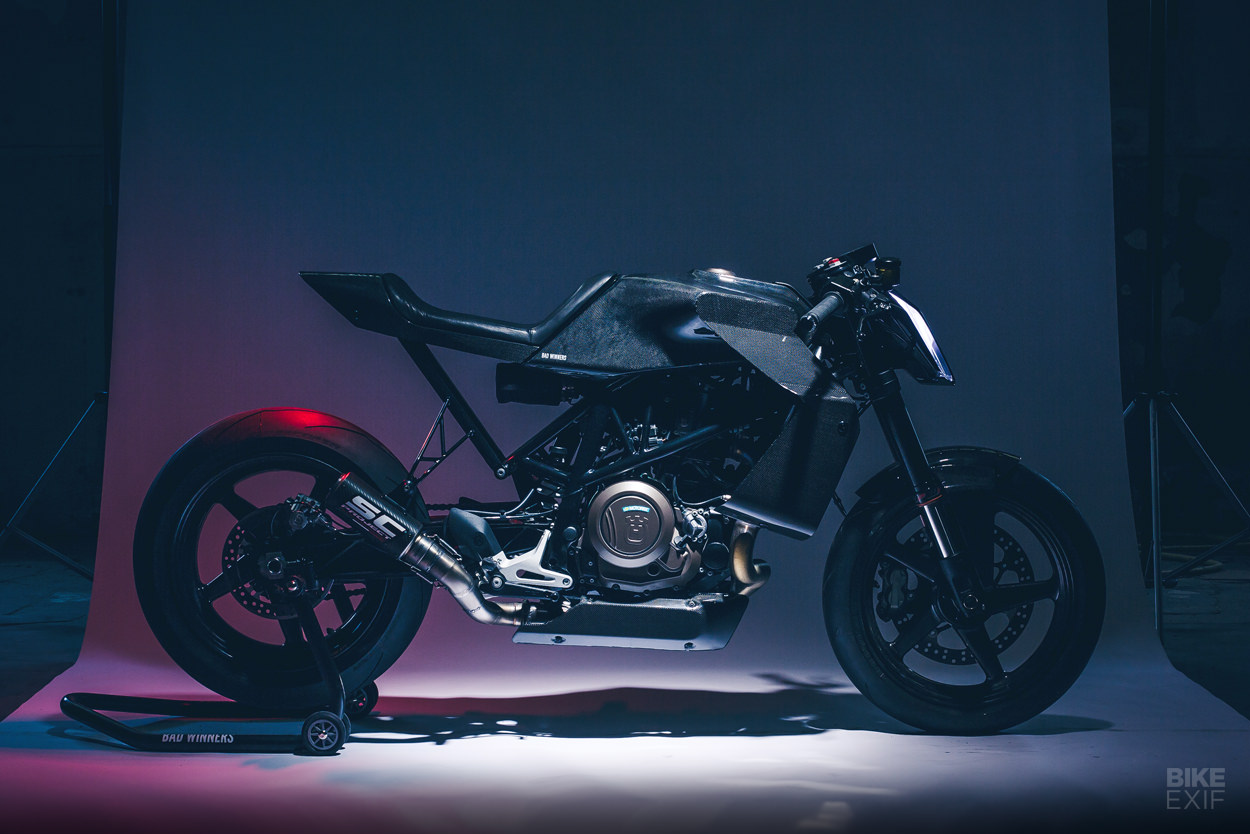 He’s just 22, but Charles Leclerc is one of the fastest drivers Formula 1 has seen in decades. It was only in 2018 that he made his F1 debut, and last year he was fast-tracked into the Ferrari team. And he promptly scored more race wins and points than his teammate—the four-time World Champion Sebastian Vettel.

Like many super-quick Formula 1 drivers, Leclerc is also an avid motorcyclist. Past and present pilots such as Senna, Schumacher, Hamilton, Button and Webber have shared this passion, but Leclerc is also part of a even smaller group. 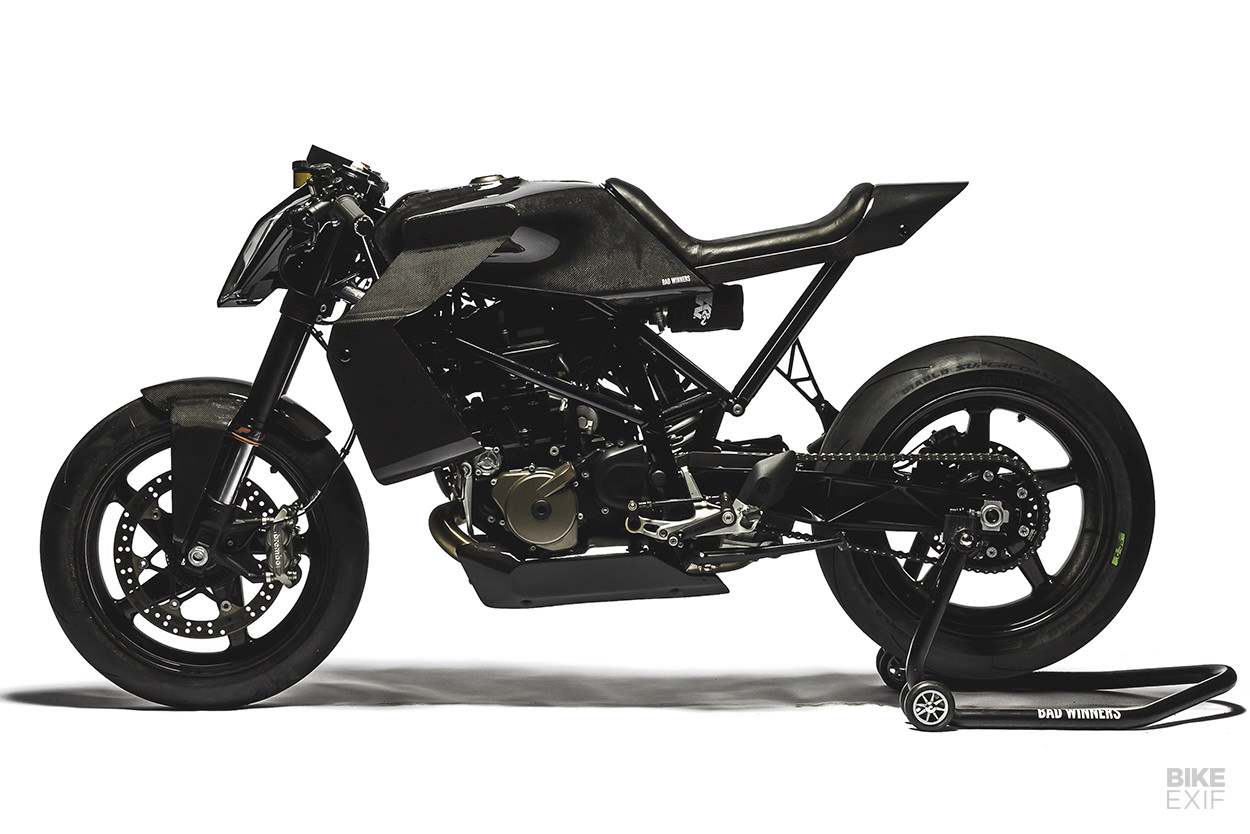 Along with Kimi Räikkönen—who ironically vacated his Ferrari seat for the young Monégasque—he’s a fan of custom bikes.

We know this because Leclerc has just commissioned a custom Vitpilen 701 from one of our favorite French builders, Walid from Bad Winners. 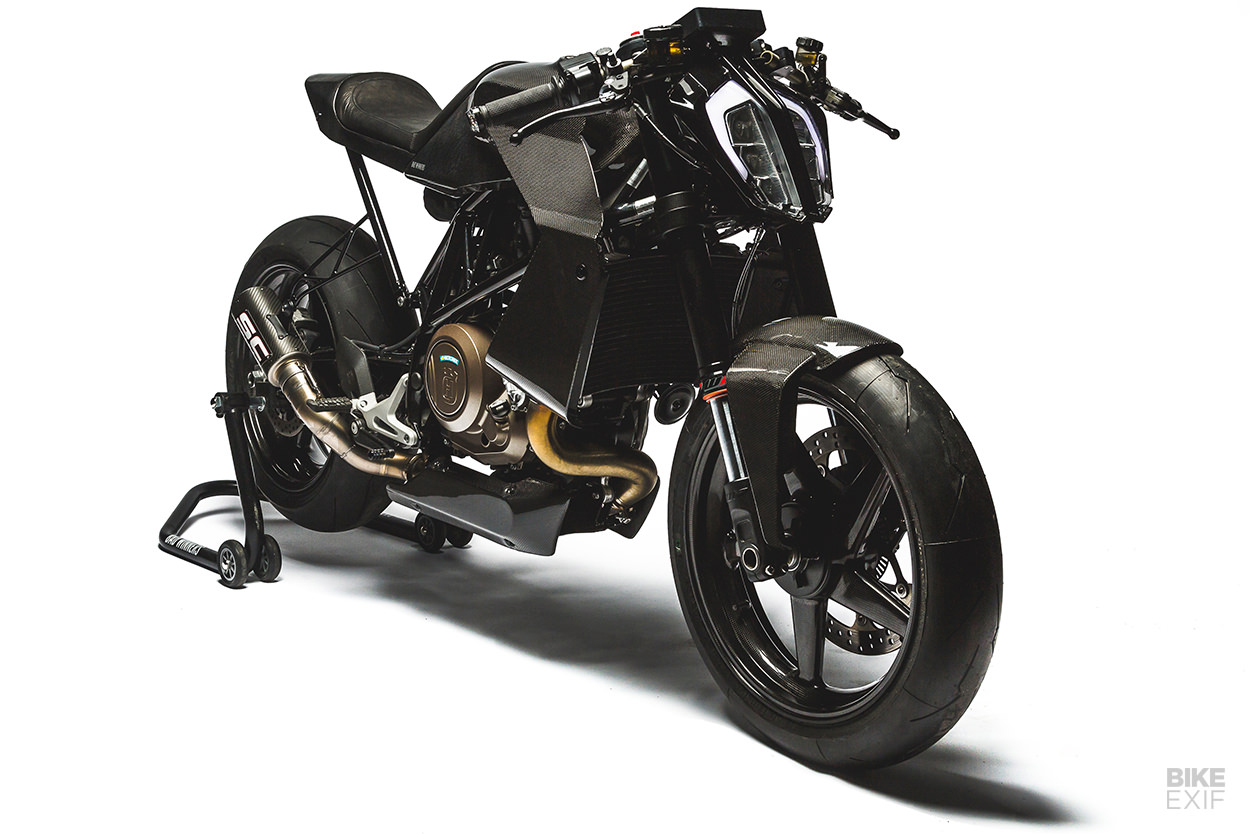 “It started with a simple message on Instagram,” Walid tells us. “A message from Charles Leclerc to the Bad Winners account! At first I thought it was spam.”

“Charles said, ‘I’ve been following you for a while, and I really like your motorcycles. Would it be possible to make me one?’” 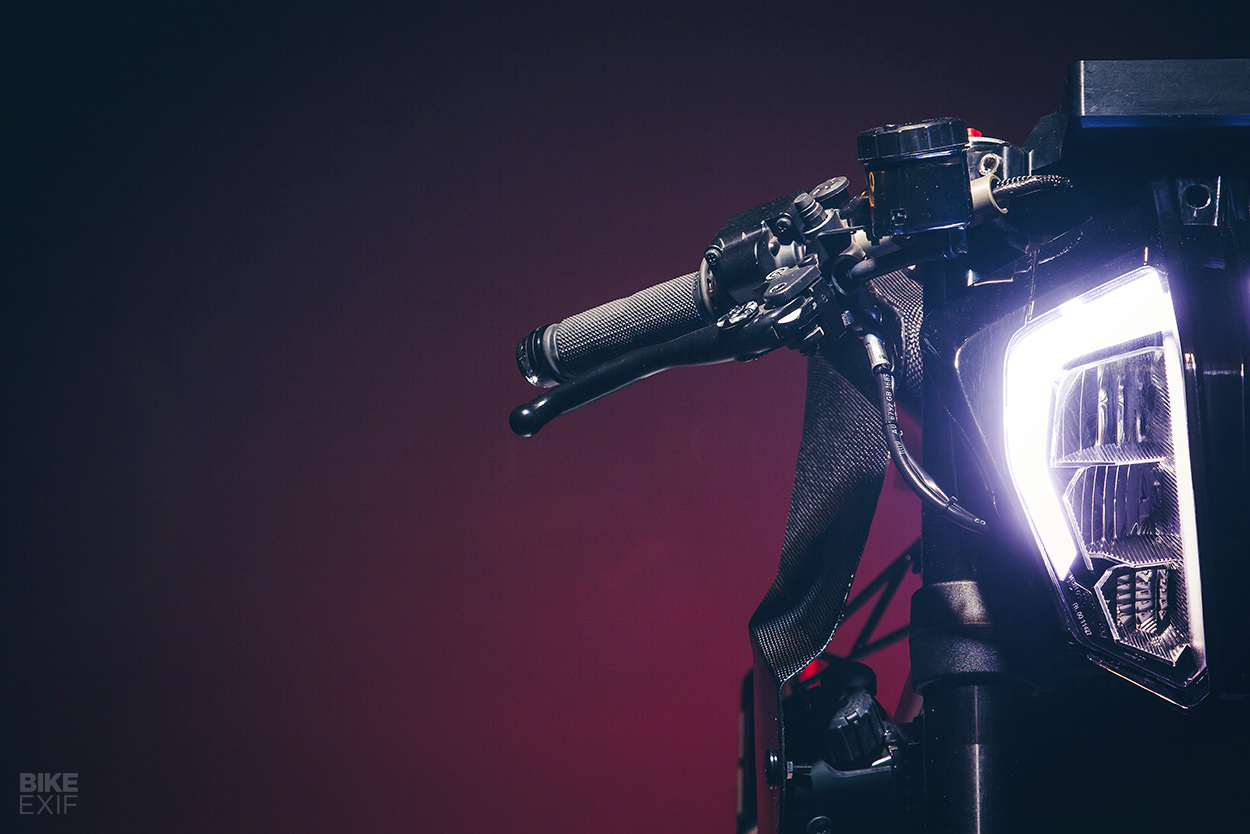 Walid was not convinced that this was the real Charles Leclerc. He sent through his number, and then his phone rang. Leclerc was on the other end of the line.

He told Walid that his favorite bike was ‘The Apex,’ the Yamaha FZS600 Fazer from around three years ago. And he’d like to use that bike as inspiration for a build based on the Husqvarna Vitpilen 701. Project ‘Apex 2.0’ was underway. 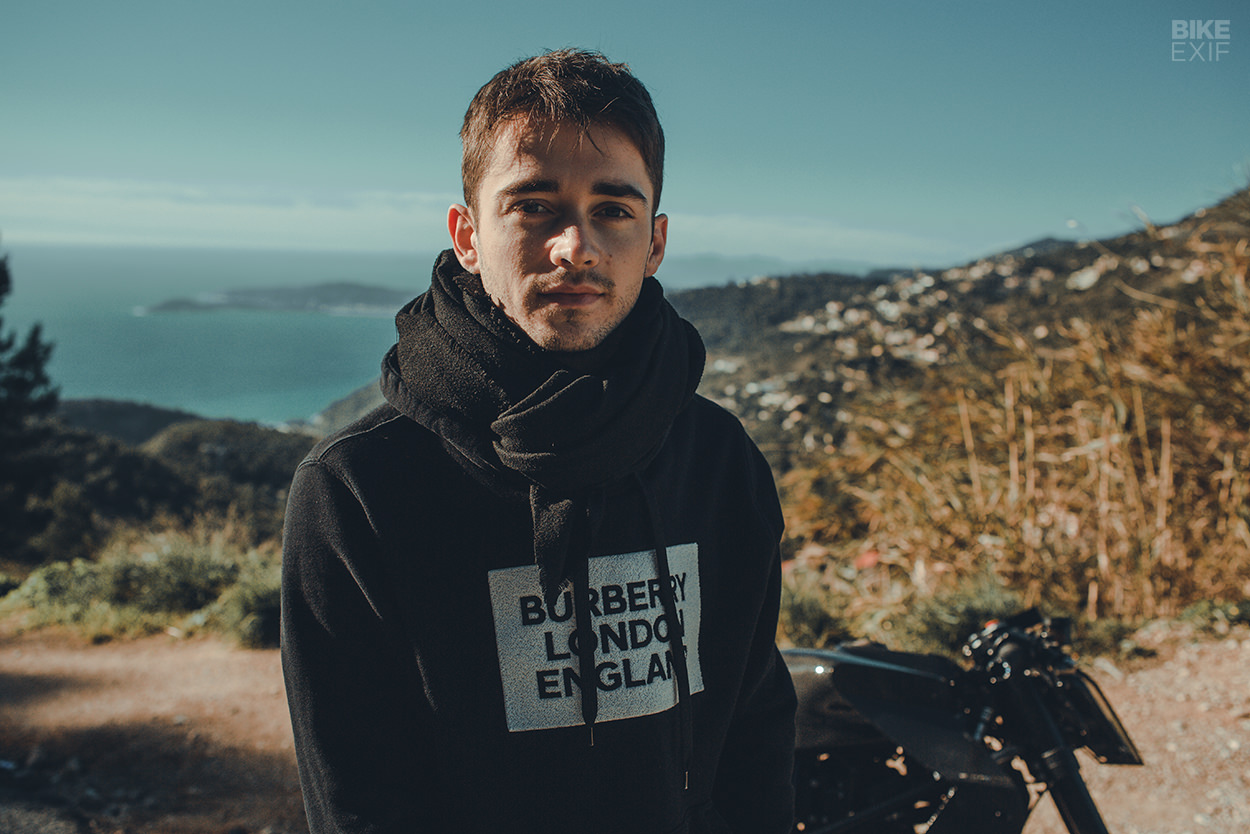 After a few days of reflection, Walid started work on the lines. He presented a concept to Charles (above), who gave it the tick.

There is some trick electronic work going on with the instrumentation, but the most obvious changes are in the silhouette. “We worked on the shapes in 3D modeling, before launching our 3D printers to get master parts ready for the manufacture of the molds,” says Walid. 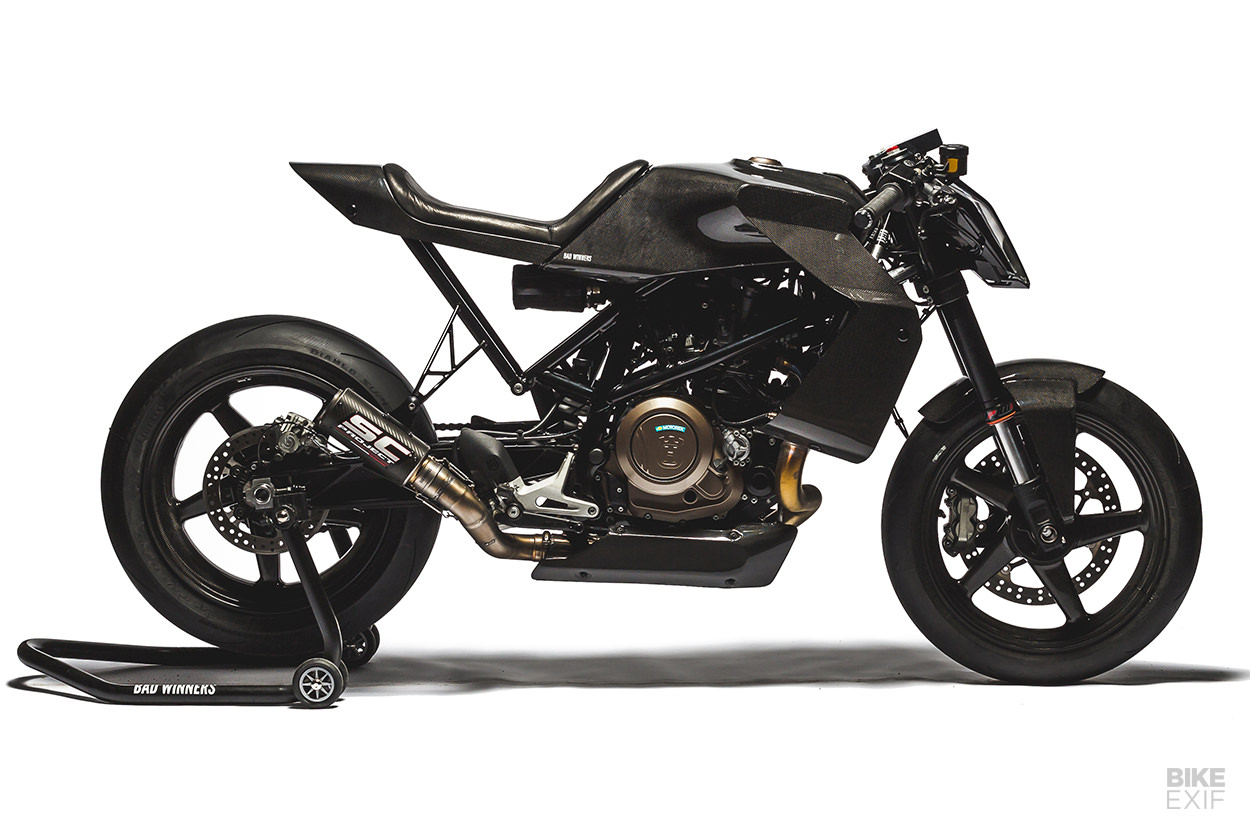 The new bodywork is even more angular and futuristic than the shapes crafted by Husqvarna’s design studio Kiska, and from the KTM Duke 790 headlight backwards, it’s all in carbon. Because as every racing driver knows, weight is the enemy.

“Charles wanted carbon parts, as well as carbon wheels,” says Walid. “Having always worked with Dymag in the UK, I asked them to manufacture the wheels. All other parts of the carbon trim were made in-house.” The CA5 five-spoke wheels weigh around six pounds each—less than three kilos. 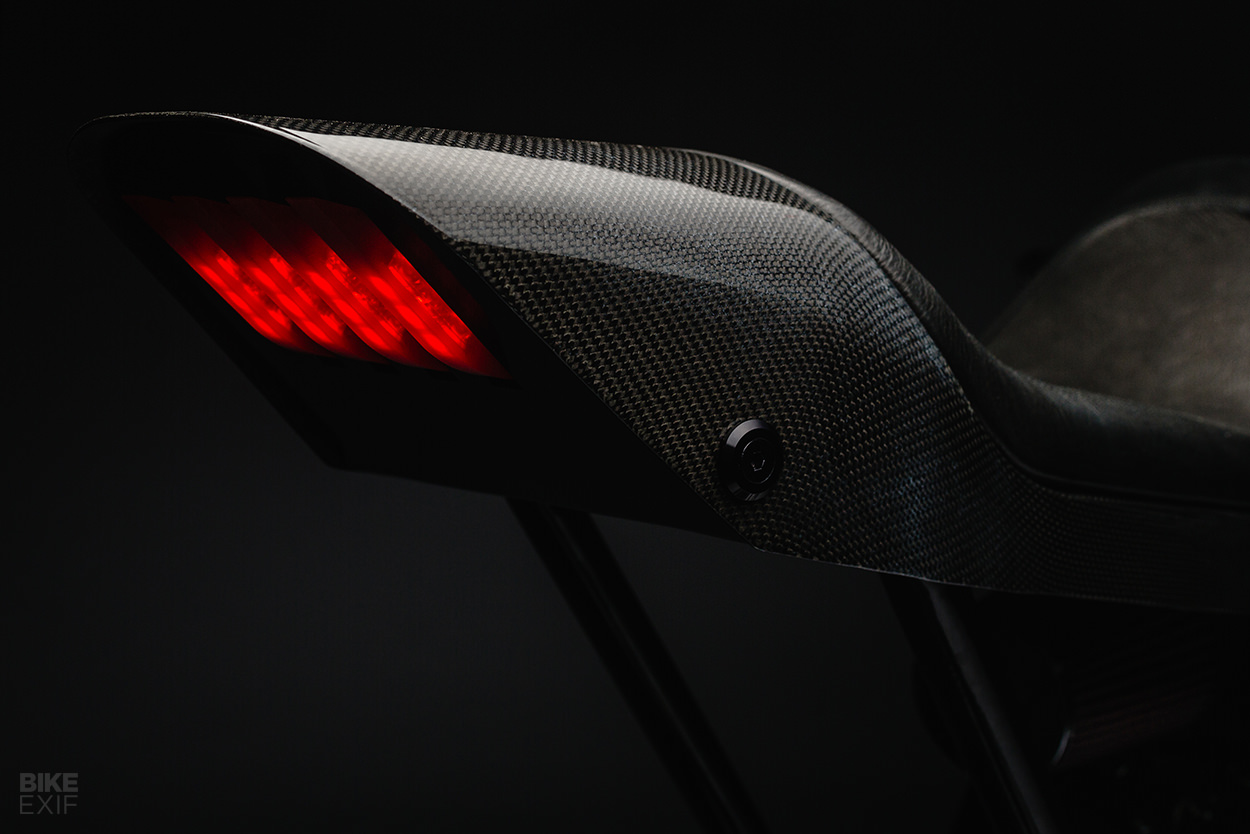 The slender rear frame is manufactured in-house too, and incorporates a laser-cut 1.5mm steel plate and a custom leather saddle. Behind is a taillight in CNC’d translucent red Plexiglass, with four integrated LEDs, and the tiny rear module also hides an Antigravity eight-cell battery.

At the engine level, Walid has disconnected the catalytic system and made a stainless steel pipe to eliminate the cat itself. SC-Project jumped on board and supplied a carbon CR-T muffler, closely related to the systems it supplies to MotoGP teams. A Dynojet Power Commander V keeps everything in perfect tune. 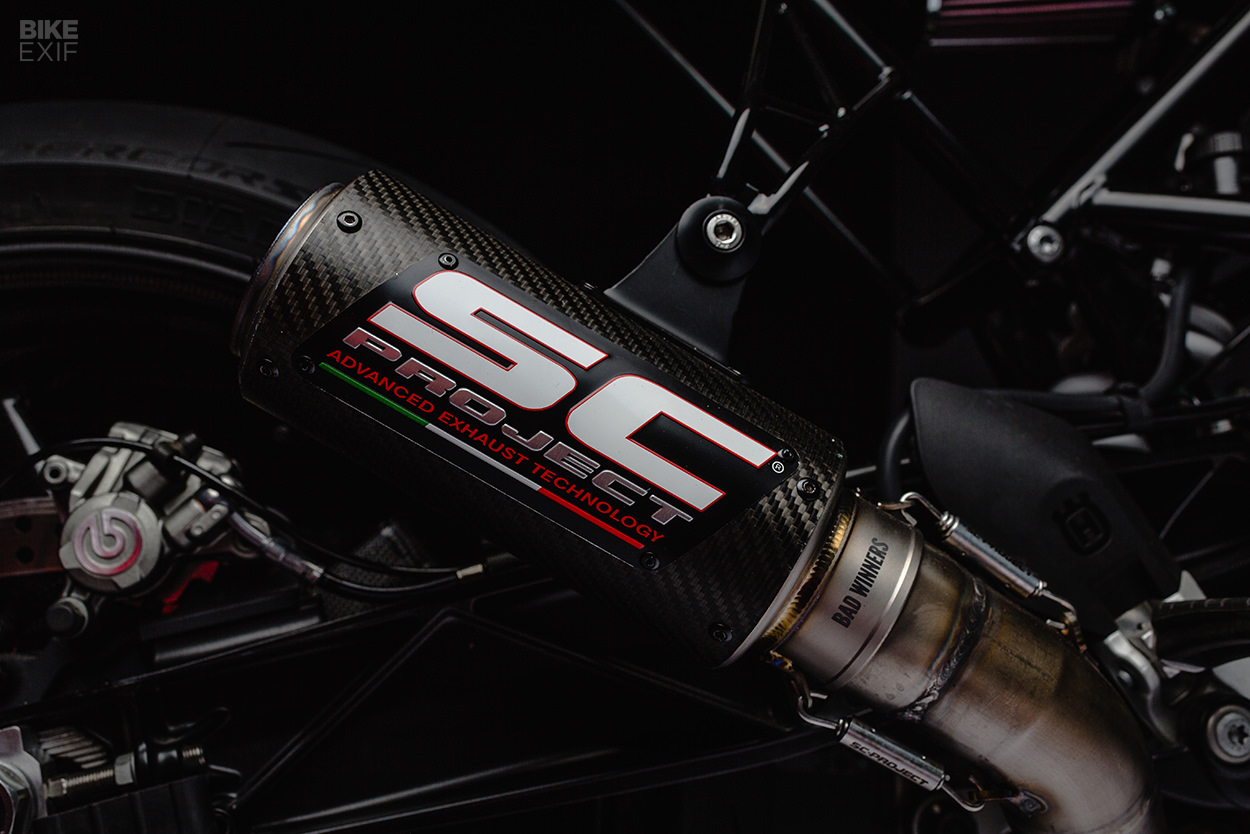 The most complex work was in the cockpit, though—because Walid has developed a new speedo setup.

“Who has dreamed of being able to change their speedo and handlebar controls, without having to cut out the wiring of their motorcycle?” he says. “It’s especially hard on a current model such as the Vitpilen 701—modern motorcycles are rolling computers.” 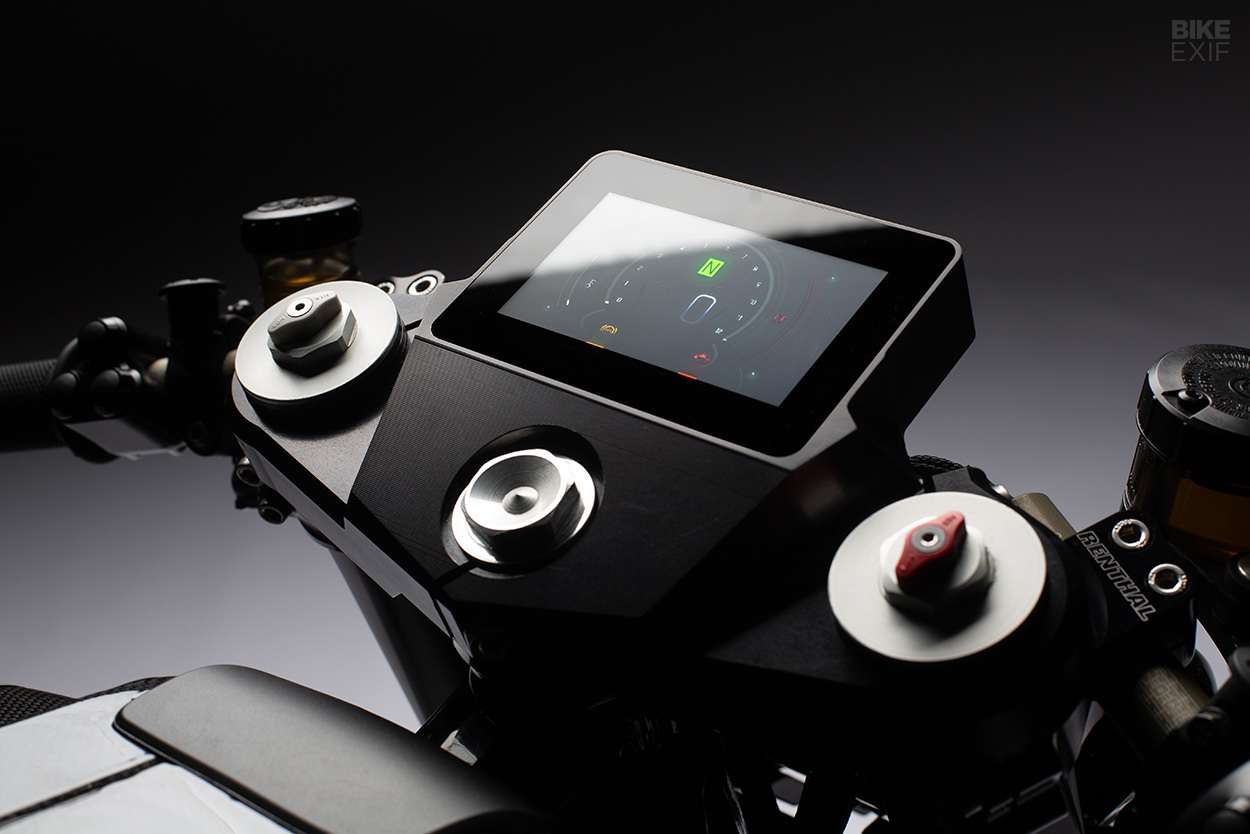 So Bad Winners have developed a separate motherboard that communicates with the motorcycle’s ECU, without any change to the original wiring harness. And matched it to a 4.3″ LED ultra-bright screen.

And although you can wire in new pushbuttons on the bars, standard functions like the traction control and ABS are unaffected. 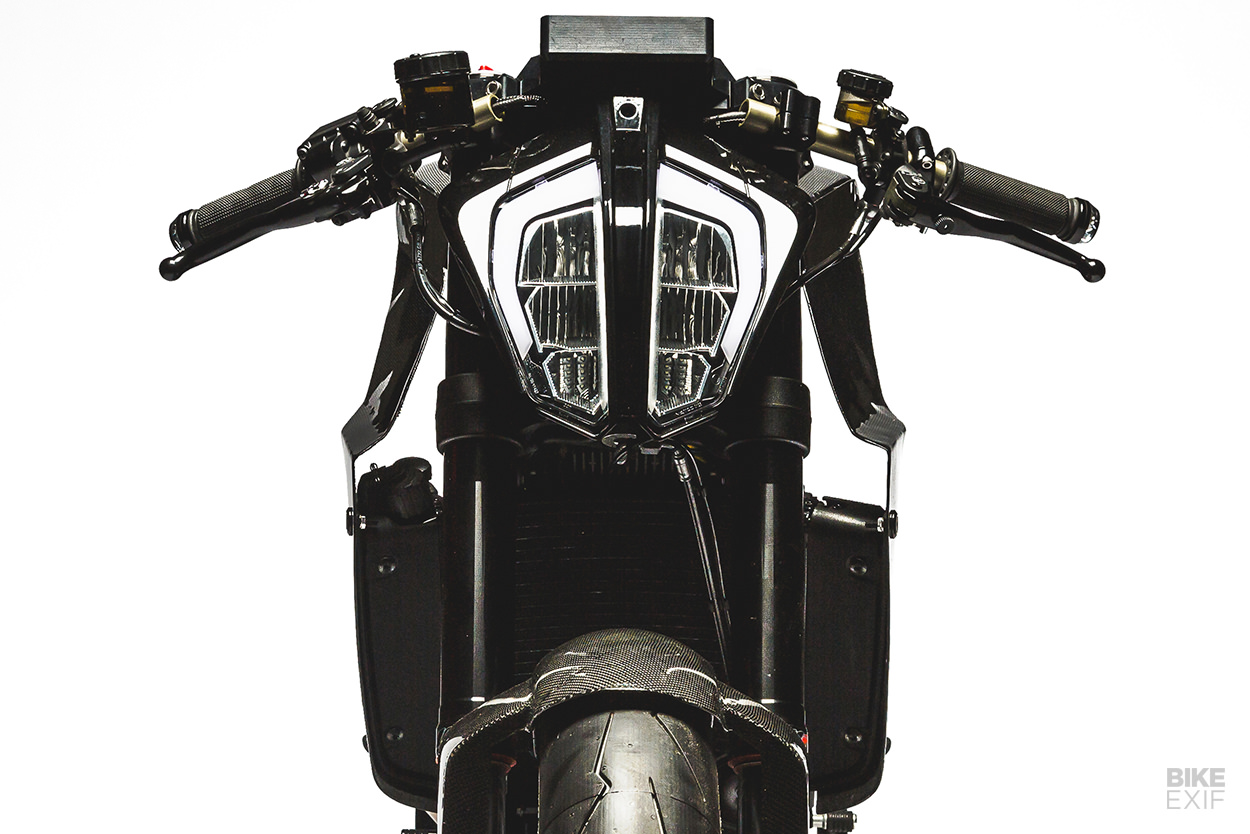 On Leclerc’s Vitpilen 701, the speedo is integrated directly into a custom upper triple tree, next to Renthal racing clip-ons. But in the coming weeks Walid will be releasing versions for the standard Vitpilen and Svartpilen.

There will also be versions for the BMW R nineT, the ‘new’ Enfield twins and the Scrambler Ducati 800—and some notoriously hard to modify recent Triumphs, including the T100, T120 and Thruxton. 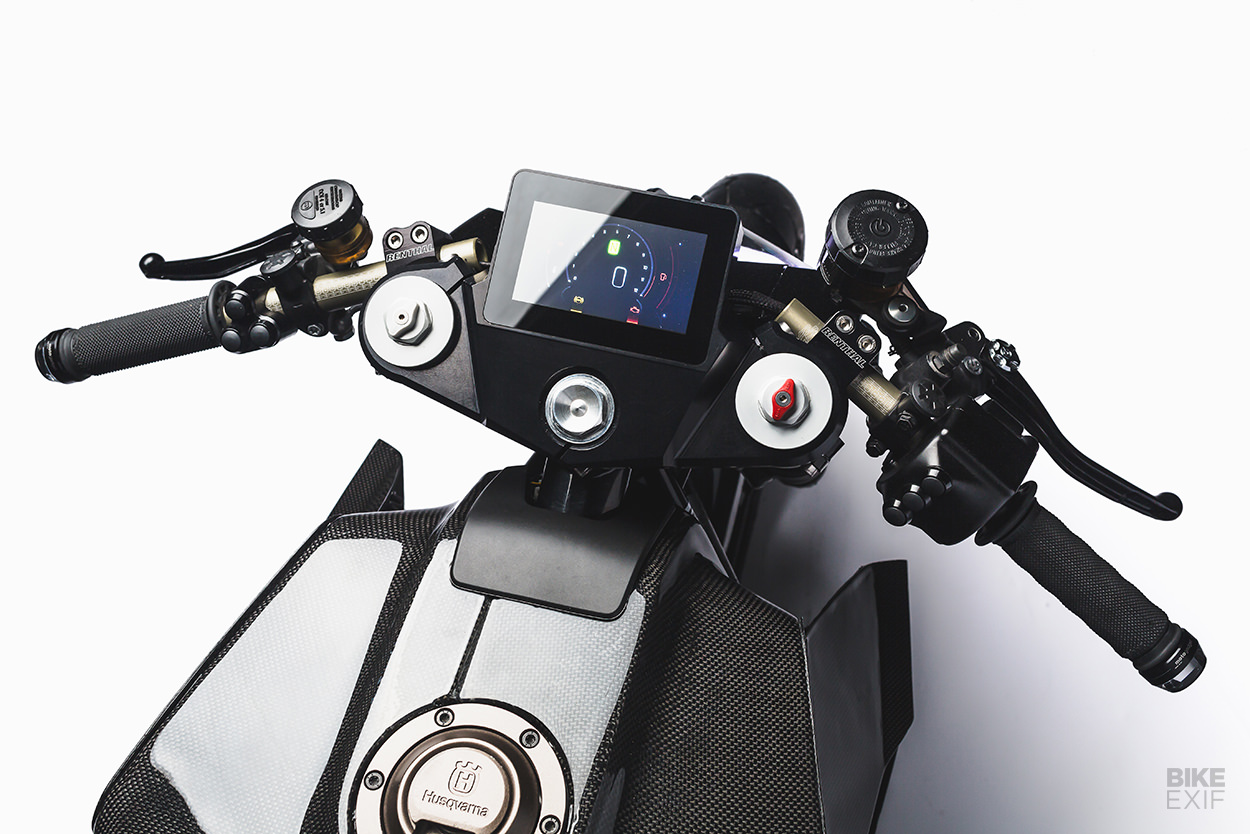 The stock Vitpilen is no slouch, but Leclerc’s new steed will be considerably faster. Walid estimates that the power is up from 75 to around 85 horsepower, thanks to the de-cat and Power Commander.

And with the carbon bodywork and wheels, reduced exhaust plumbing and smaller rear frame, dry weight is down from an already impressive 157 kg (346 pounds) to a featherlight 130 kg (287 pounds). 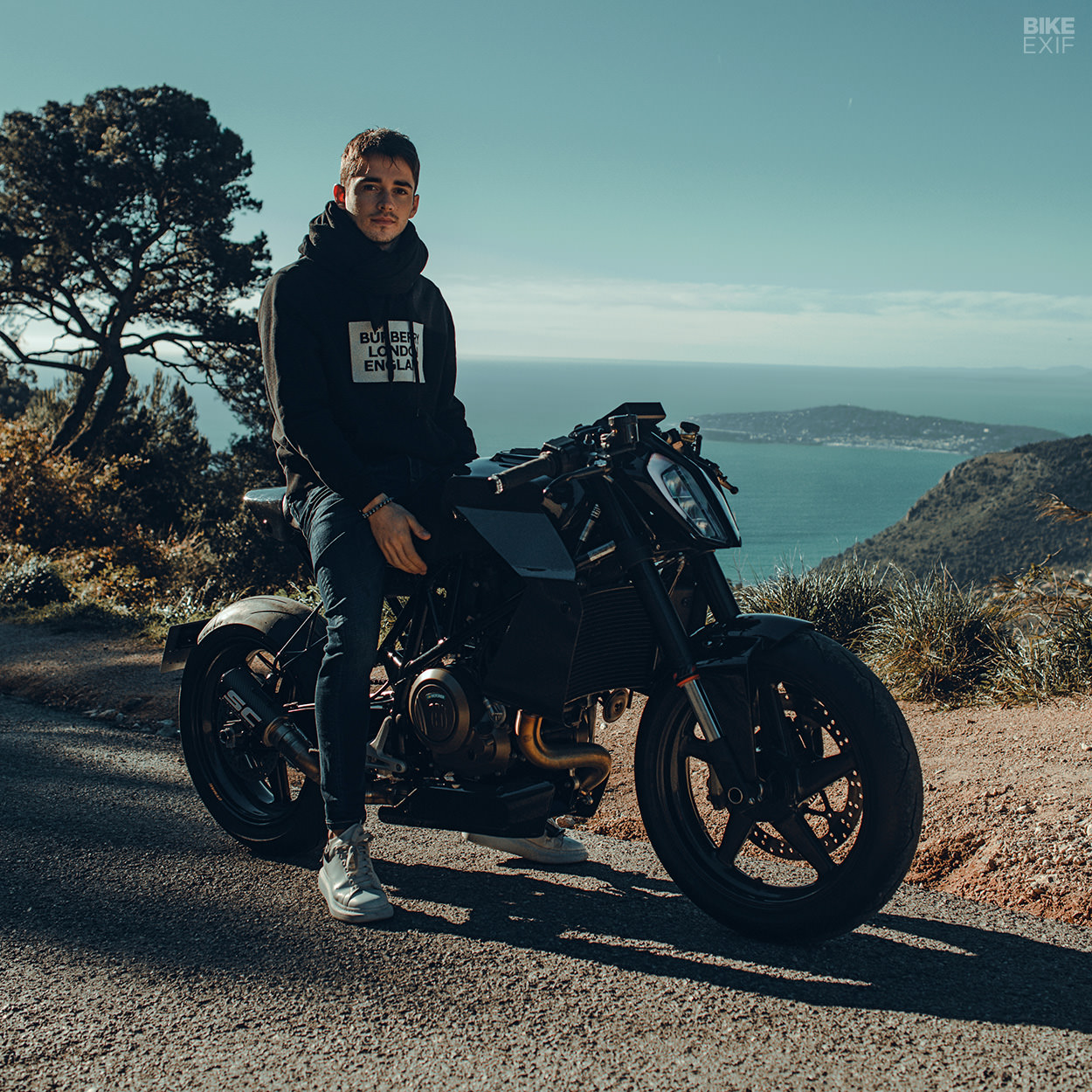 Bad Winners can replicate this build, including a new Vitpilen 701 and all the carbon parts, for €20,990—around US$23,400. (The Husqvarna manufacturer warranty is unaffected.) If that’s too steep, three alternative configurations will soon be available, going down to €14,690 (around US$16,400).

The Vitpilen is a terrific bike straight out of the box, as we discovered when we reviewed it. With even less weight and a smidge more power, this custom sounds like the perfect machine for blasting around the tight Monaco streets—and the switchbacks of the nearby mountain passes.

Monsieur Leclerc has made a most excellent choice. 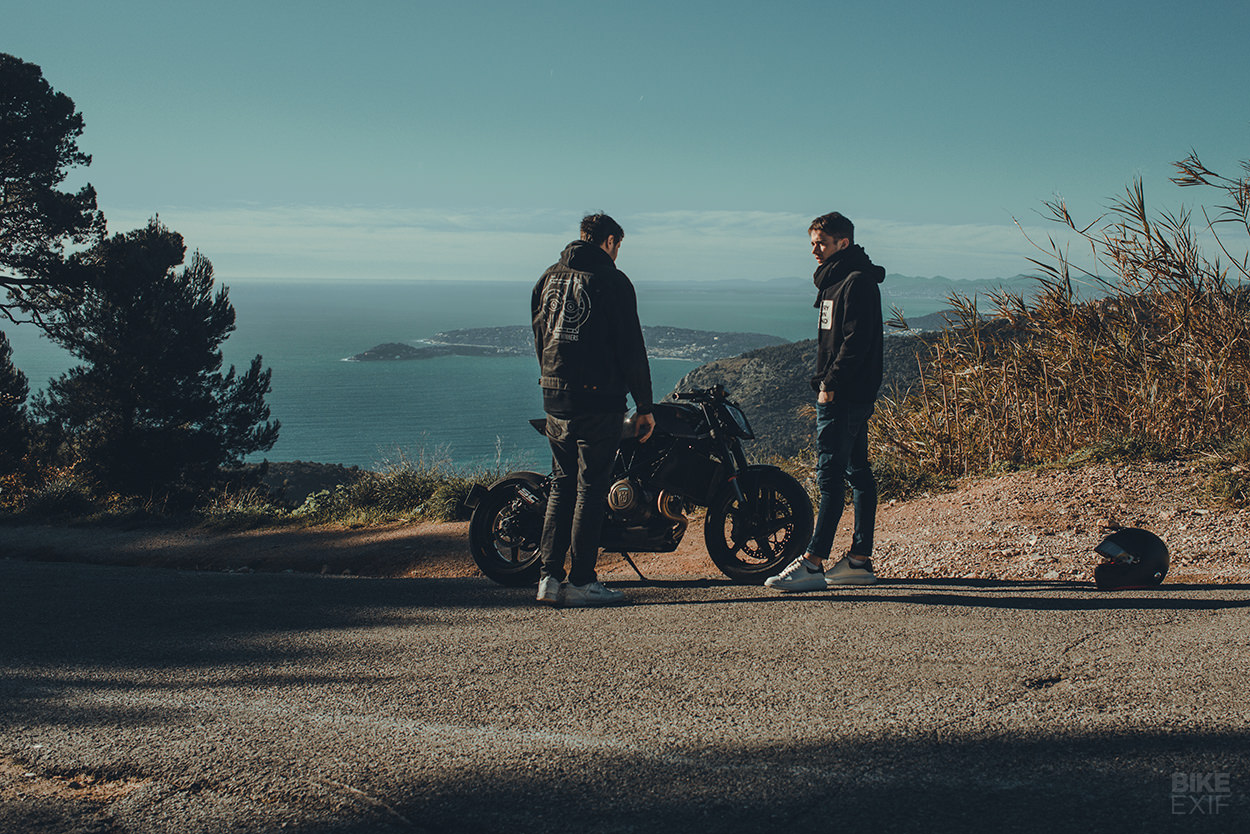