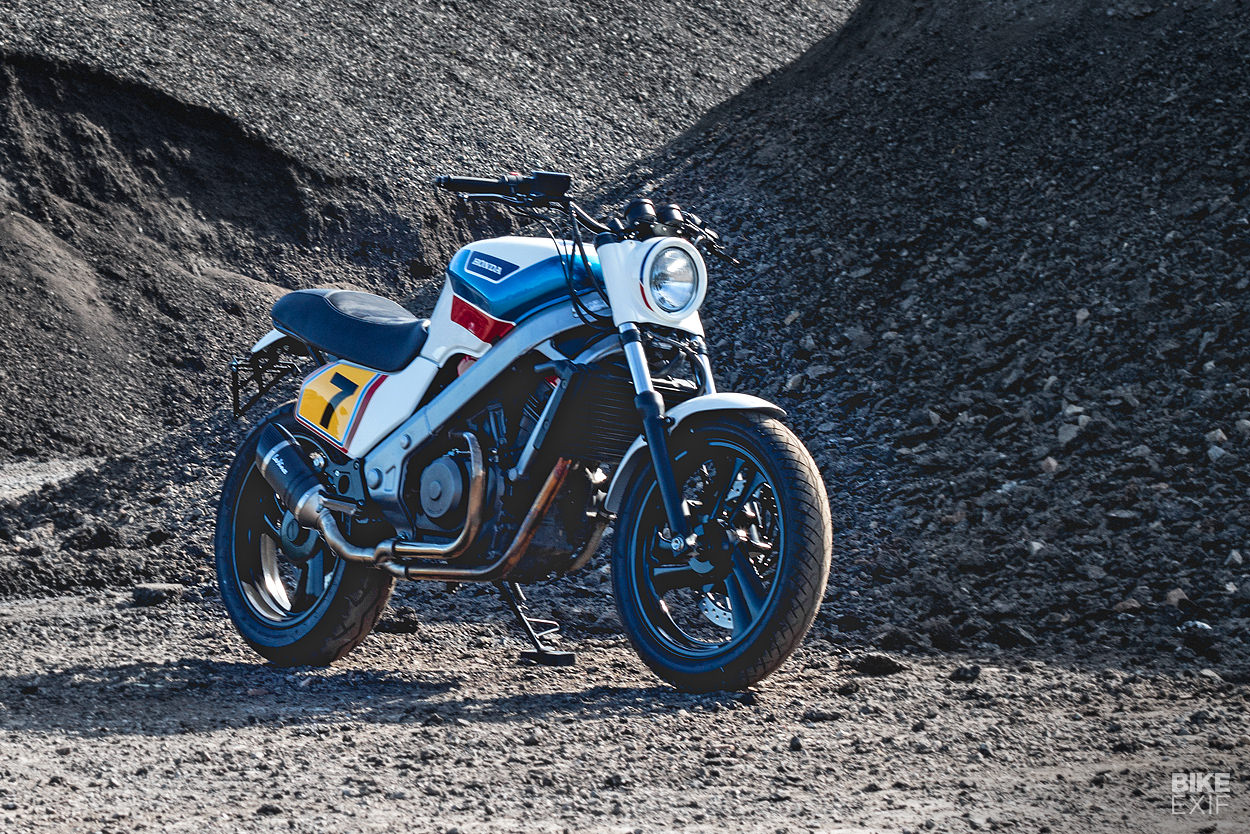 Honda have made some truly beautiful machines over the years, but they’ve also had their share of aesthetic bungles. The mid-70s CB750, for example, is downright elegant; the mid-90s Nighthawk model, not so much.

This didn’t stop Kaspeed Moto from hitting a home run with a Nighthawk cafe racer last year. They turned it into a limited series of made-to-order builds, and it paid off—they’ve already filled three orders, with two more bikes currently on the bench. 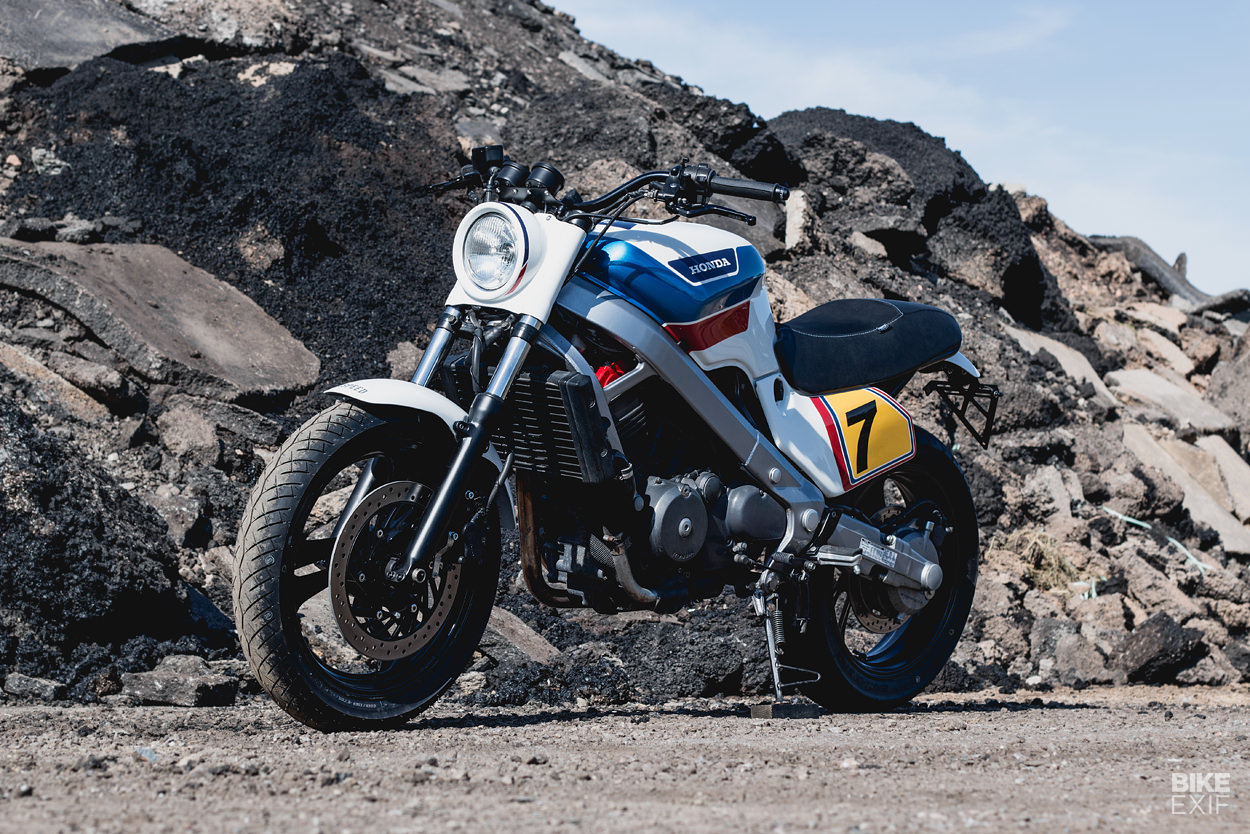 But the German crew was presented with an even tougher challenge recently. They had to build something decent with an even more awkward mid-90s Honda—the rather ugly NTV 650 Revere.

The SOHC, V-twin NTV 650 is a weird mash-up: a retro sport-tourer back end, and a barebones roadster front end. But it’s also been praised for its reliability as a daily runner, and even though it only makes 50-something horses, it’s a fun ride. 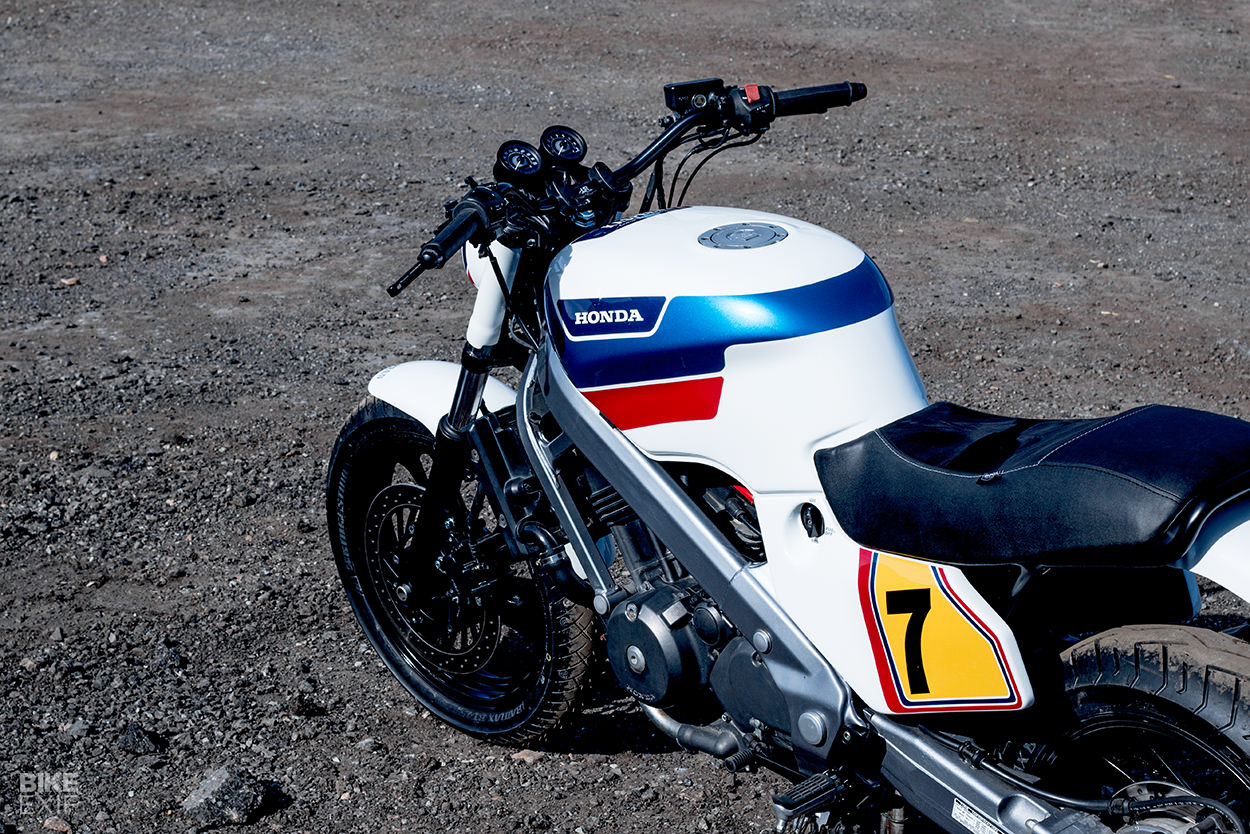 That (and the fact that it uses a shaft drive) prompted one of Kaspeed’s clients to buy a 1996-model NTV 650, and drop it in their laps.

“We just needed to make it look, sound and ride more fun,” Kaspeed’s Jimmy Dressel tells us. “And get rid of some weight, of course!” 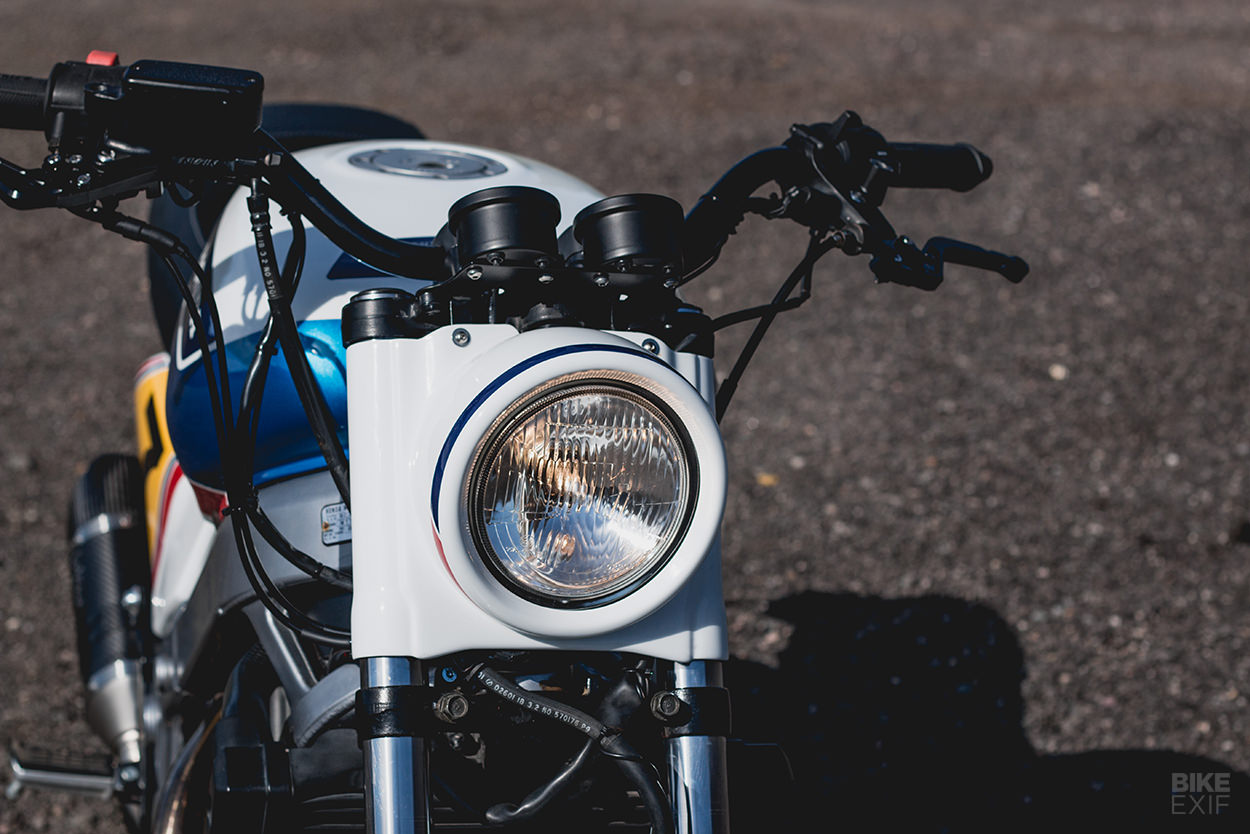 Jimmy, his twin brother and their father run Kaspeed from their workshop in Glauchau, Saxony. Their first hurdle was just figuring out a direction to take the build in.

“This wasn’t an easy job,” Jimmy admits. “We couldn’t just take our Honda CB750 cafe racer plan out of the drawer and start. It wasn’t easy to create a pleasing design and stay within budget at the same time.” 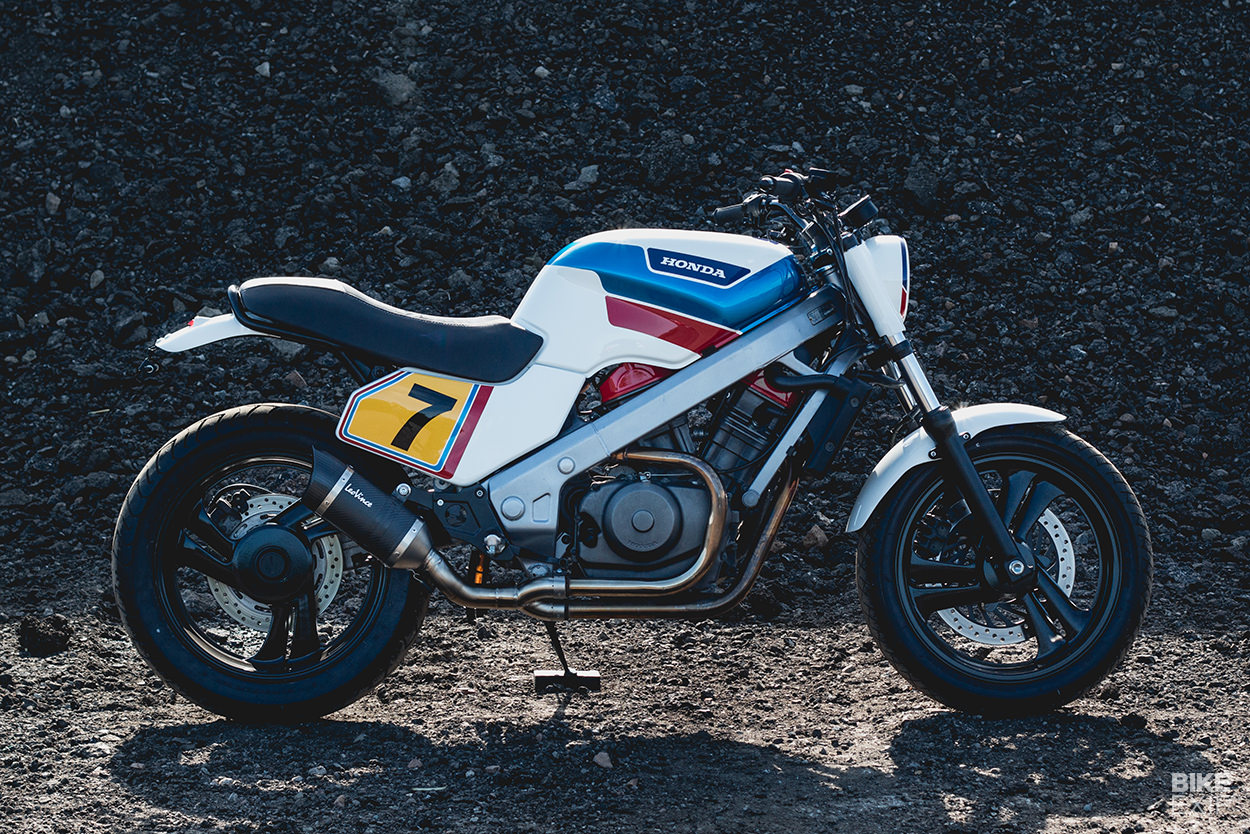 The guys settled on a roadster style, while taking subtle cues from scramblers and street trackers too.

To keep the costs to a minimum, they decided not to make any major frame or motor changes. With that distinct box frame and those split tri-spoke wheels, this NTV 650 now has just the right amount of 90s weirdness—but the overall package looks a lot fresher. 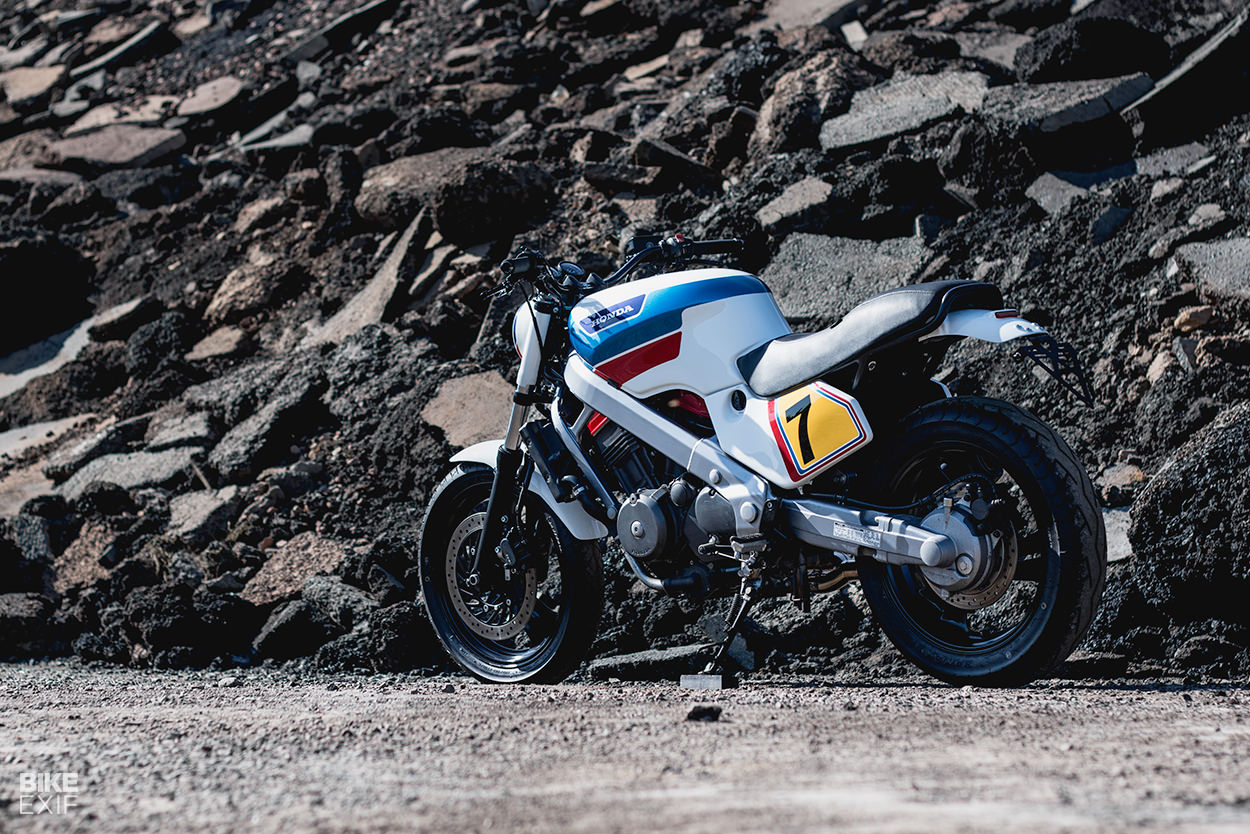 The only major chassis changes are happening at the back. Kaspeed lifted the rear end with a new linkage and an adjustable shock, instantly giving the NTV a much more aggressive stance.

The crew also rebuilt the subframe, and they did a damn neat job too. There’s a small kick in the rear that’s sporting a more rectangular form than your garden-variety cut-n-shut job. Finishing off the rear is an aftermarket fender from JvB-Moto, kitted with an LED taillight. 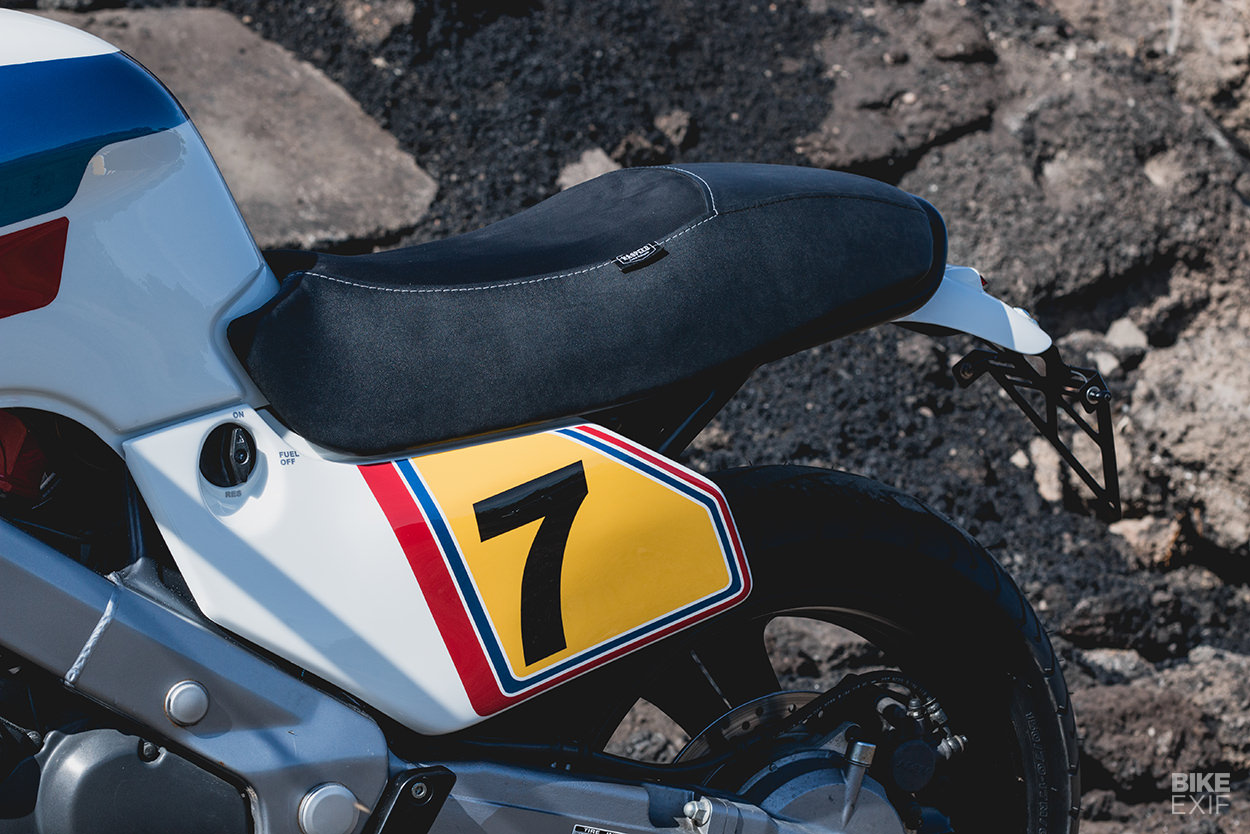 The new seat’s more generously padded than most custom jobs, and was designed to mimic the ergonomics of the Ducati Monster’s perch. It’s sporting leather on the sides, with Alcantara on top.

Kaspeed kept the NTV 650’s original fuel tank, but they ditched the side covers for a custom set that exhibit just a smidge of flat track style. To create them, the team shaped a pair of foam forms first, then built the final pieces with fiberglass and Kevlar laminate. They have an OEM feel to them (there’s even a cutout for the fuel tap on the left side, complete with guide markings). 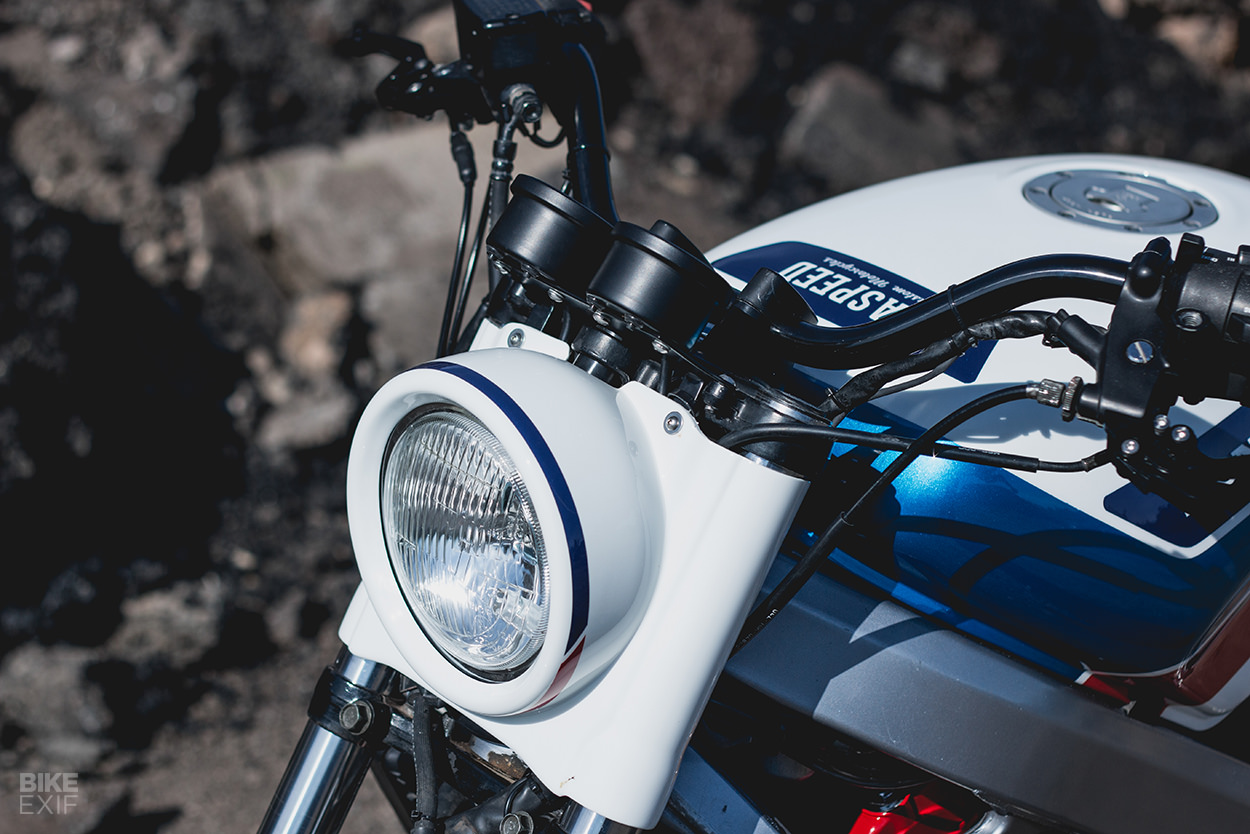 To complement the NTV 650’s new stocky vibe, Kaspeed fitted JvB-Moto’s signature headlight and shroud. Just above it are a speedo and tacho from Daytona, mounted on a custom bracket. The handlebars are from LSL, with Daytona grips, Kellermann bar-end turn signals and Probrake levers.

There’s a host of subtle tweaks tying the build together. Kaspeed trimmed the front fender, refinished the forks, wheels and subframe in black, and added a splash of red to the valve covers. There’s a new license plate bracket too, which hosts a pair of teeny Kellermann LED turn signals. 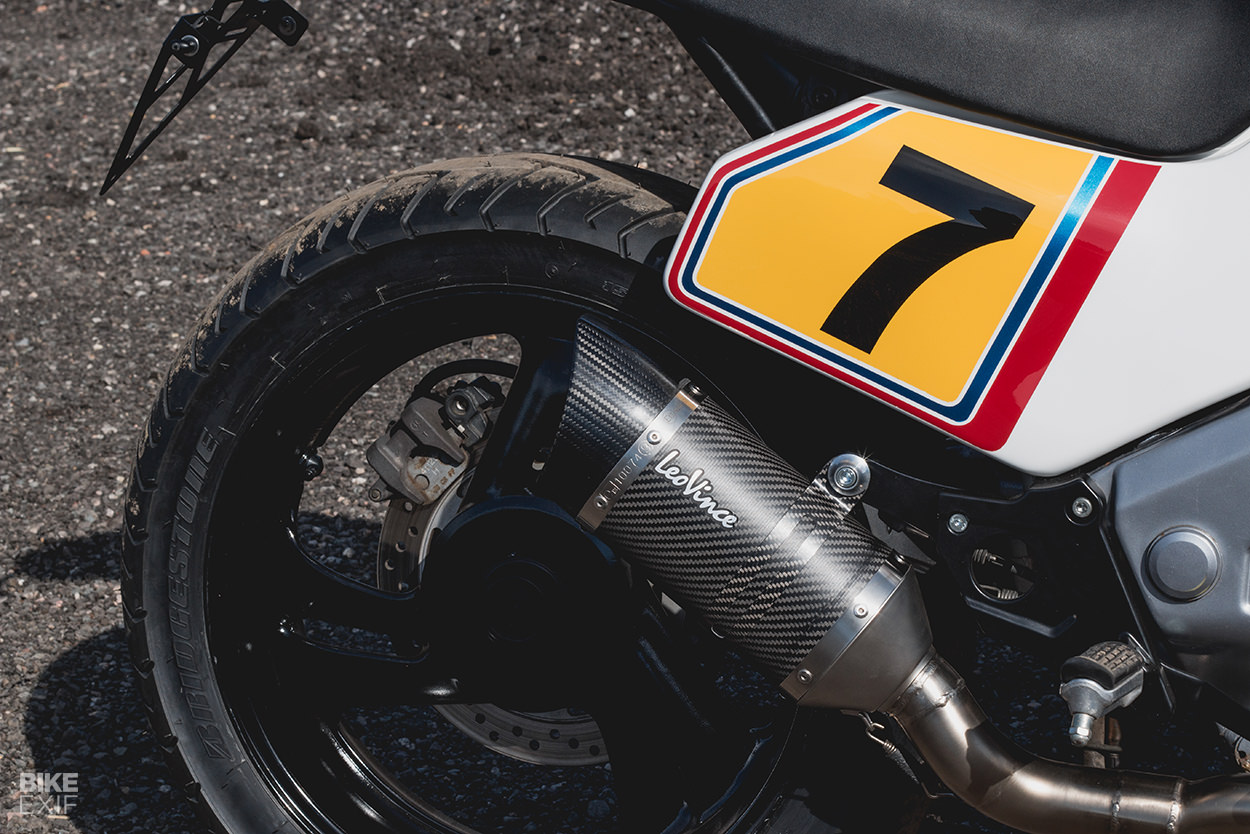 For the exhaust, Kaspeed simply added a carbon fiber Leo Vince muffler, sans its baffle. “Deep and almost supermoto-like would be how I’d describe the sound,” Jimmy tells us. “We were impressed at the first start!”

As for the new livery, it’s nothing short of inspired. Kaspeed wanted something modern that would make the bike look more agile, so they borrowed ideas from Honda’s new generation Africa Twin. 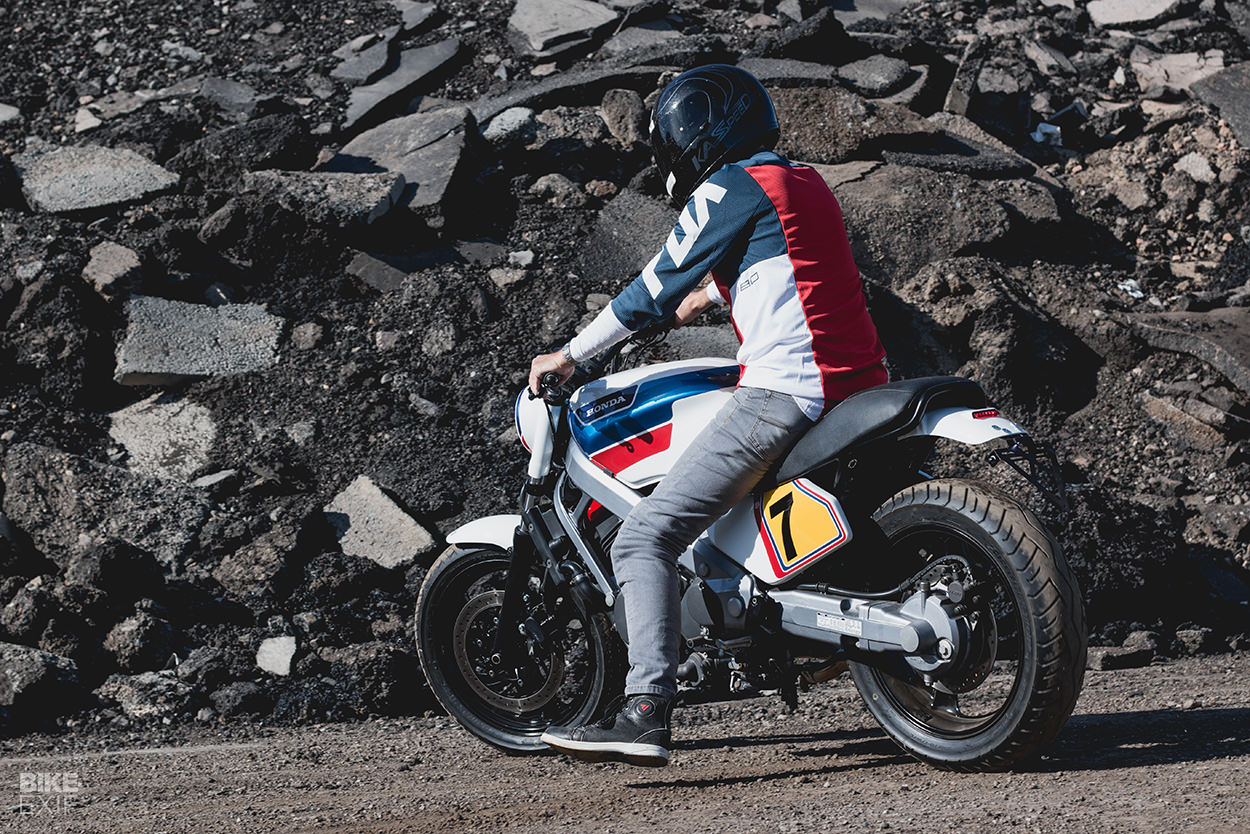 It suits the NTV 650 to a tee—but then again, so do all of the mods. From little touches like the decision to run dual clocks, to the side covers that perfectly match the tank and frame’s lines, this 90s Honda has an incredible OEM feel to it.

Which has us wondering: why didn’t Honda just build it like this in the first place? 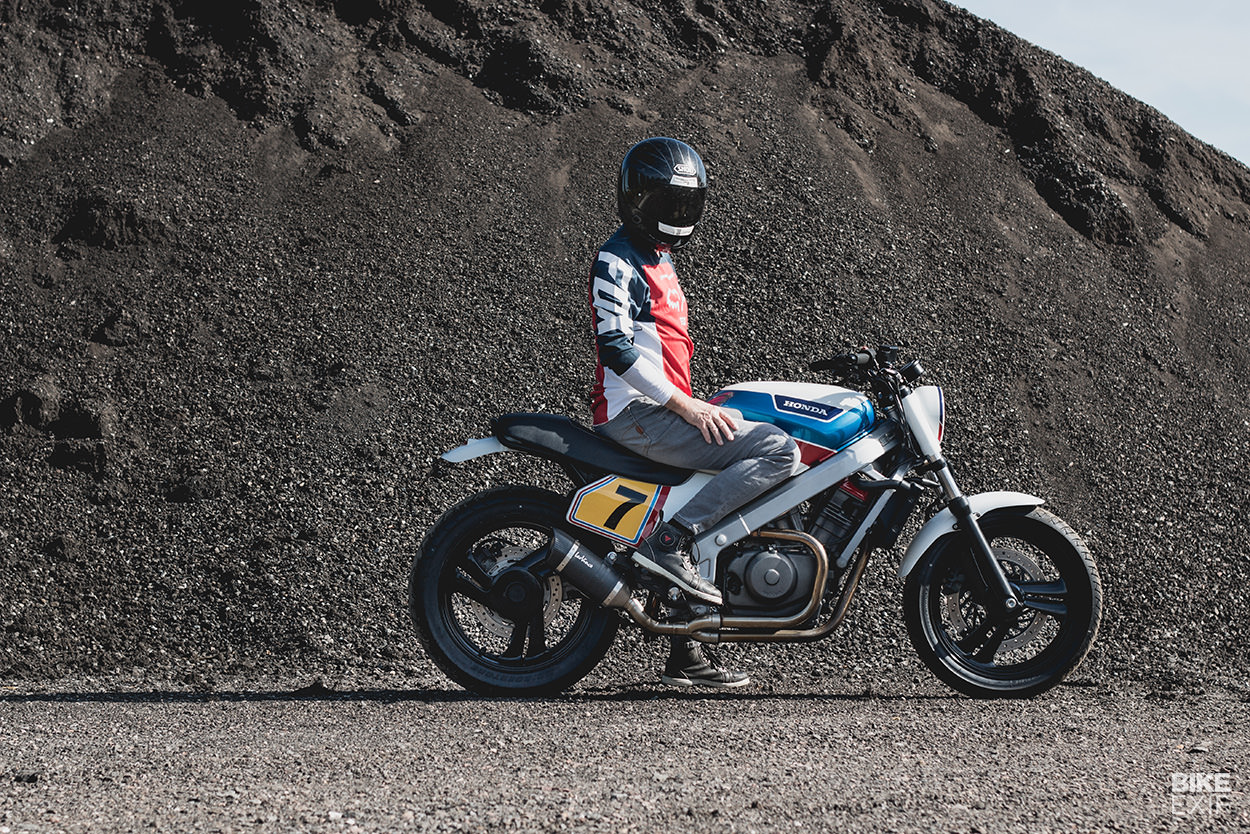