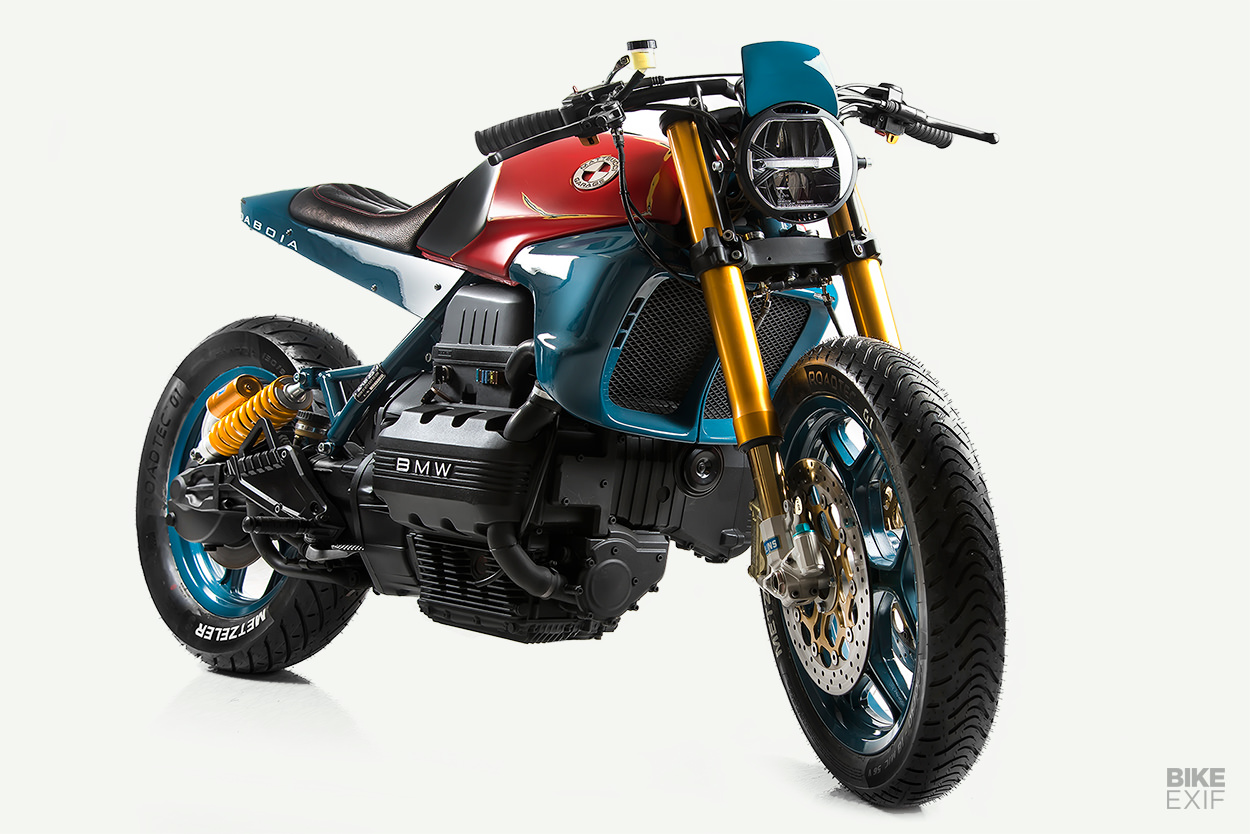 There are pros and cons to picking a K-Series BMW as a custom donor. On the up side, Ks are more readily available than their immensely popular boxer-powered stablemates, and cost less. But on the down side, they’re almost terminally ugly.

To turn a K75 into something truly attractive, you need to deal with a plethora of parts that are all visually awkward. From the fuel tank to the frame, the K75 has more angles than a geometry paper—and it takes a keen eye and crafty thinking to navigate around them. 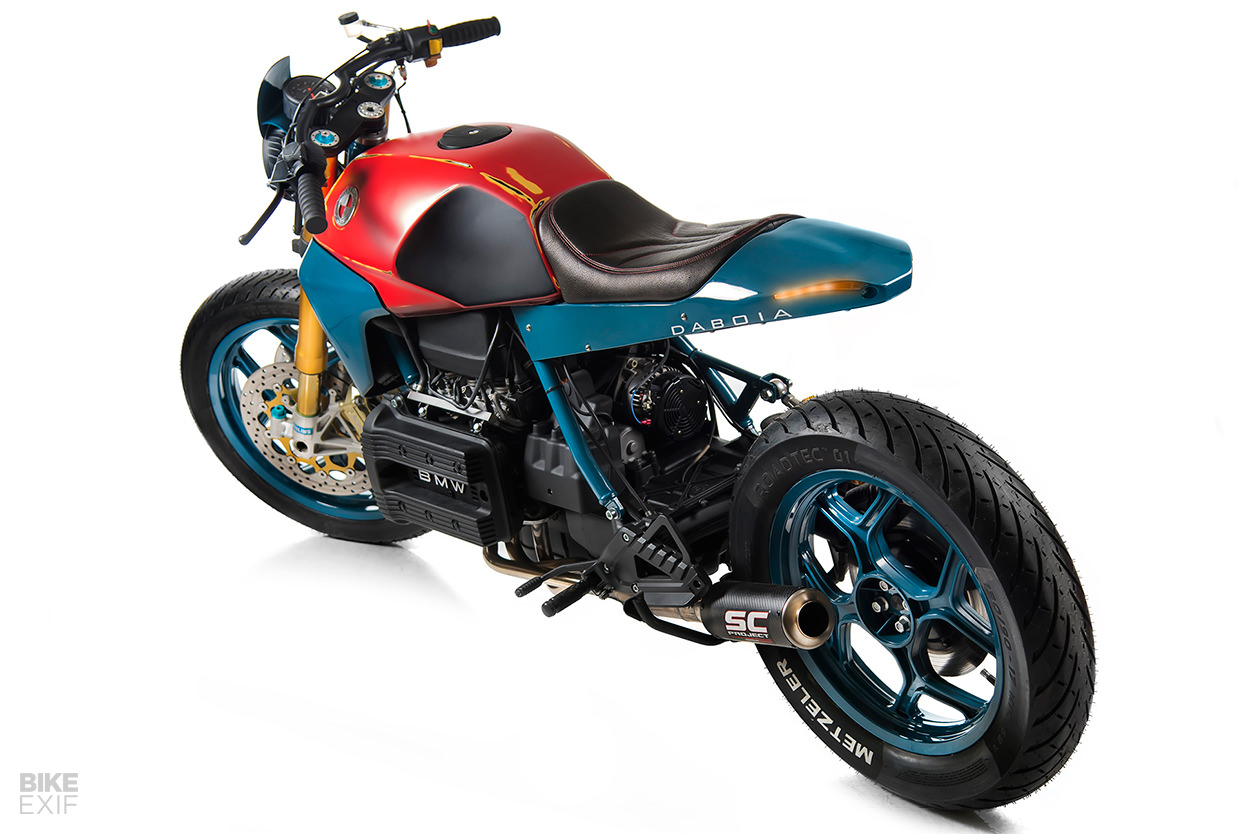 Marco Matteucci of Montegranaro in Italy clearly has the edge. He has a background as a photographer and designer, so aesthetics rank high on his list. And he’s taken the gawky late-80s BMW K75 and turned it into a slick cafe racer with a molto fresco color scheme.

Marco is a fan of the ‘less is more’ ethos, so he set out to totally transform the K while still leaving parts like the stock tank, radiator shrouds and wheels intact. He focused on the rear, with a radical reworking of the K75’s subframe. 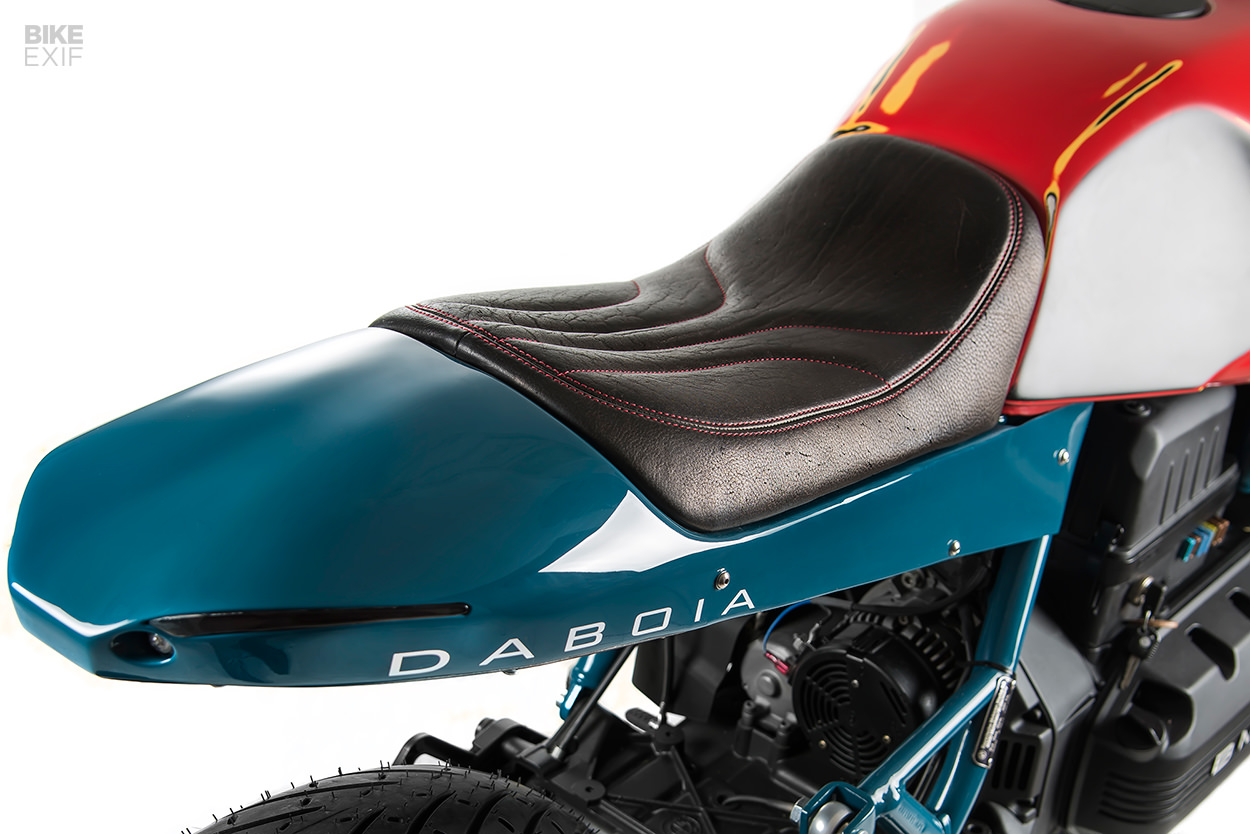 The tailpiece you’re looking at was hand-shaped from aluminum, and tapered off to resemble the head of the snake. (Hence the bike’s nickname: ‘Daboia,’ which is a genus of venomous vipers.)

Marco took the concept further by embedding twin LED tail lights as ‘eyes.’ Then he set out to emphasize the look even more, with a pair of arrow-shaped LED turn signals, hand-formed from a block of acrylic material. 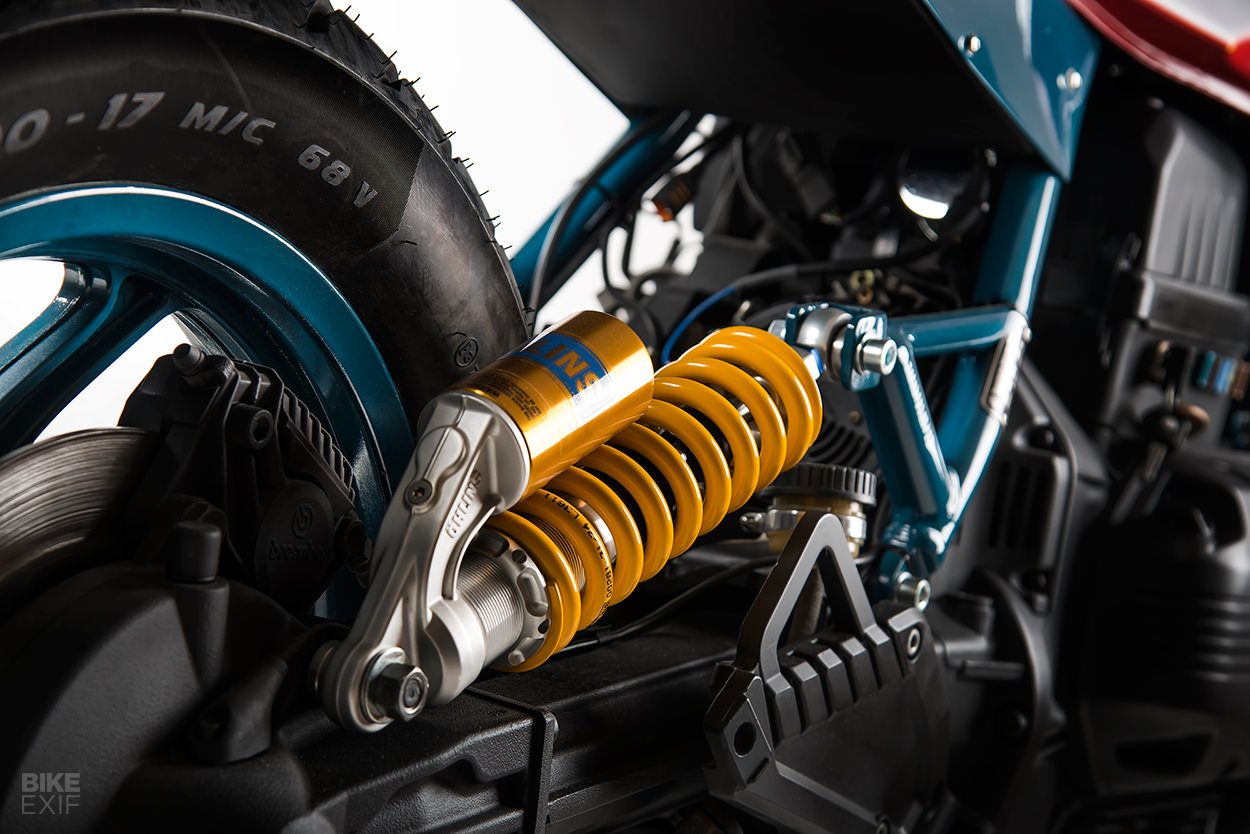 The new subframe also has a revised mounting point for the upgraded Öhlins rear shock—a deliberate move to create more visual space. With the revised geometry, Marko had to experiment with different springs to get it to perform well.

The wheels are stock, and shod with Metzeler Roadtec sport touring tires. There’s a twin Brembo brake setup with 320 mm discs up front, along with a set of Öhlins upside-down forks. 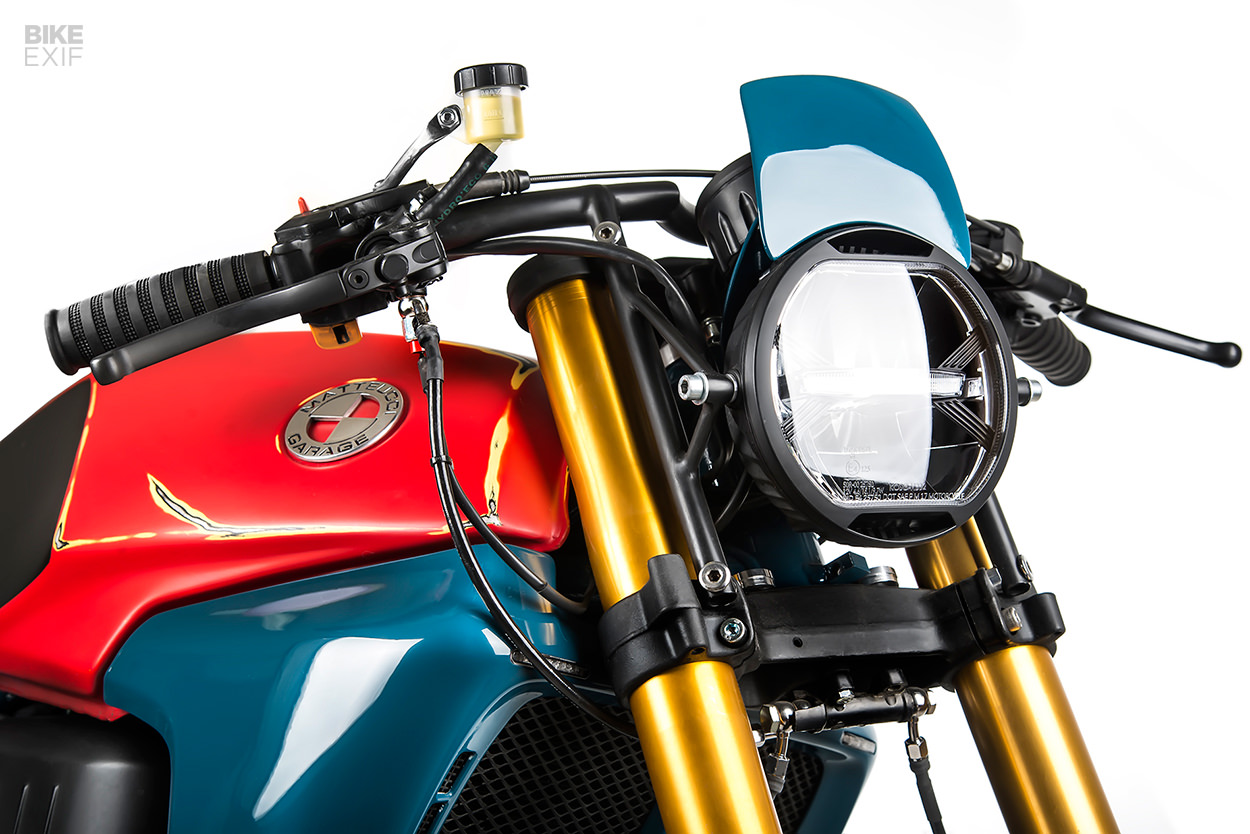 There’s a lot going on in the K’s updated cockpit. Marco installed an LED headlight on custom brackets, with a new Acewell digital speedo up top. Then he shaped a small aluminum cowl to tie it all together.

The handlebars are one-off direct-mount units, with an arch that curves ‘around’ the bottom of the speedo. Their mounts are hard to spot from most angles, giving them the appearance of floating above the triple clamp. Marco kept the stock switches but swapped out the grips, and modified the right side’s housing to interface with the Brembo master cylinder. 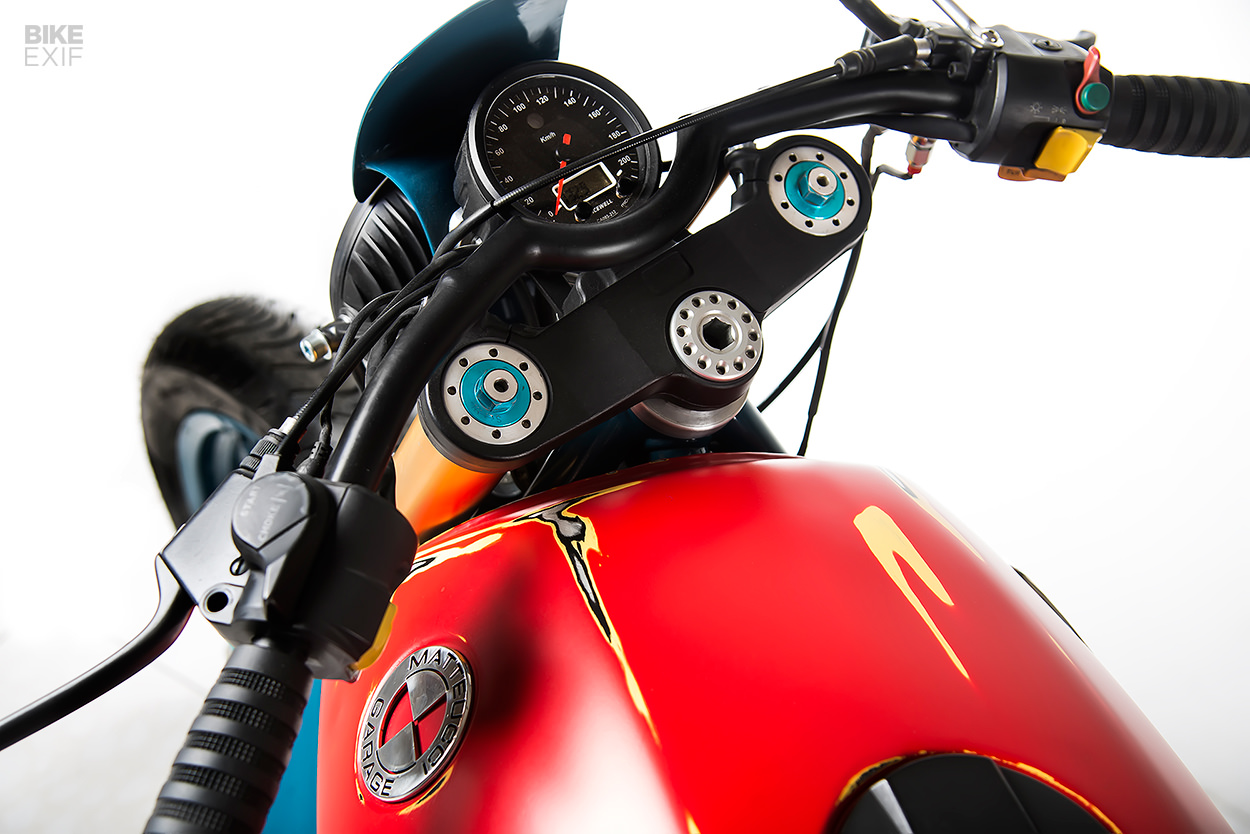 There are tons of smaller details to absorb too. You’ll spot a relocated ignition key, and an interesting ‘quick access’ fuse box, both embedded in the now defunct air box (the bike runs with pod filters now).

Marco also did some re-wiring, and shaped another set of LED turn signals to hide in the front of the radiator shrouds. 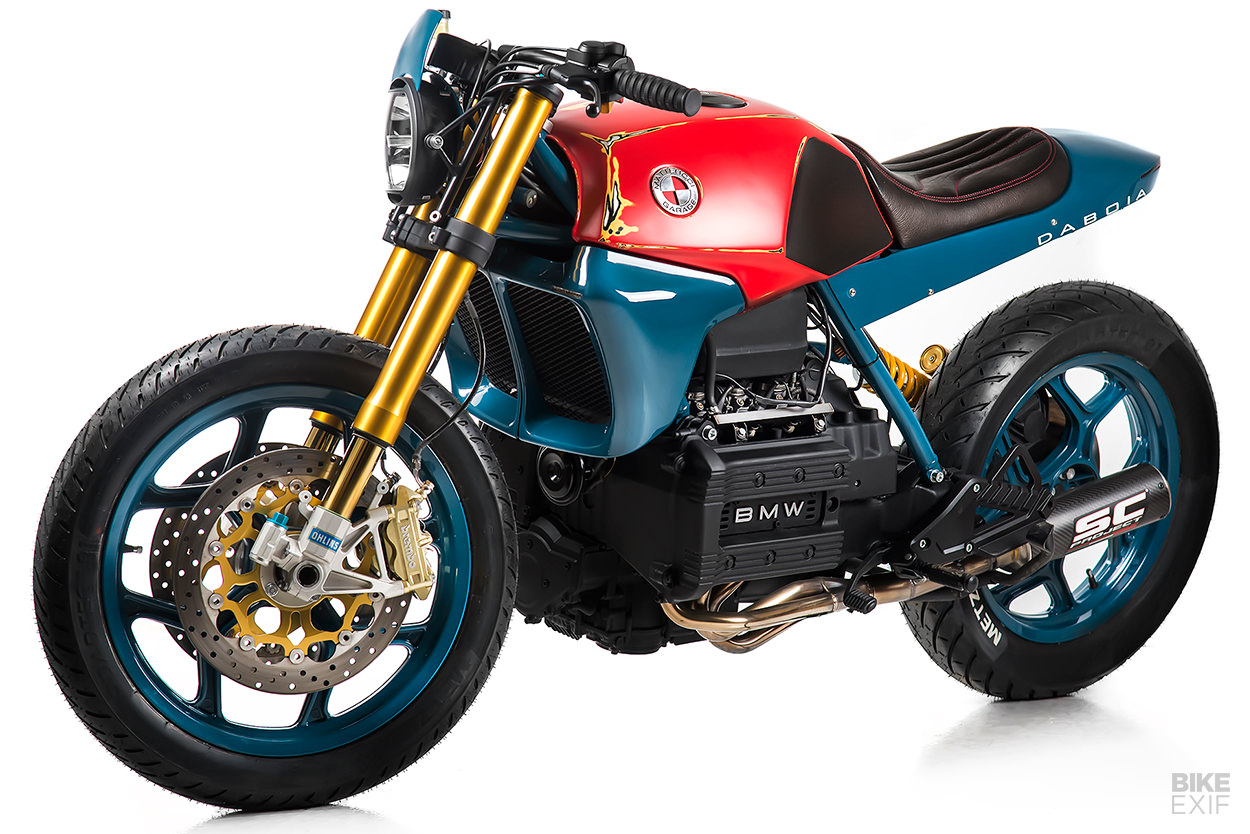 The K75’s new livery is straight out of the 80s, and is a total knockout. The tail, radiator shrouds, wheels and frames all wear a petrol blue. But the tank is especially neat, and was given a multilayered finish—with some layers deliberately distressed before everything was given a matte clear coat.

Finishing touches include a set of Matteucci Garage/BMW roundels on the tank, and a stunning Kudu leather seat cover with two-tone stitching. (Kudu is a type of antelope found in South Africa, popular for its meat and hide.) 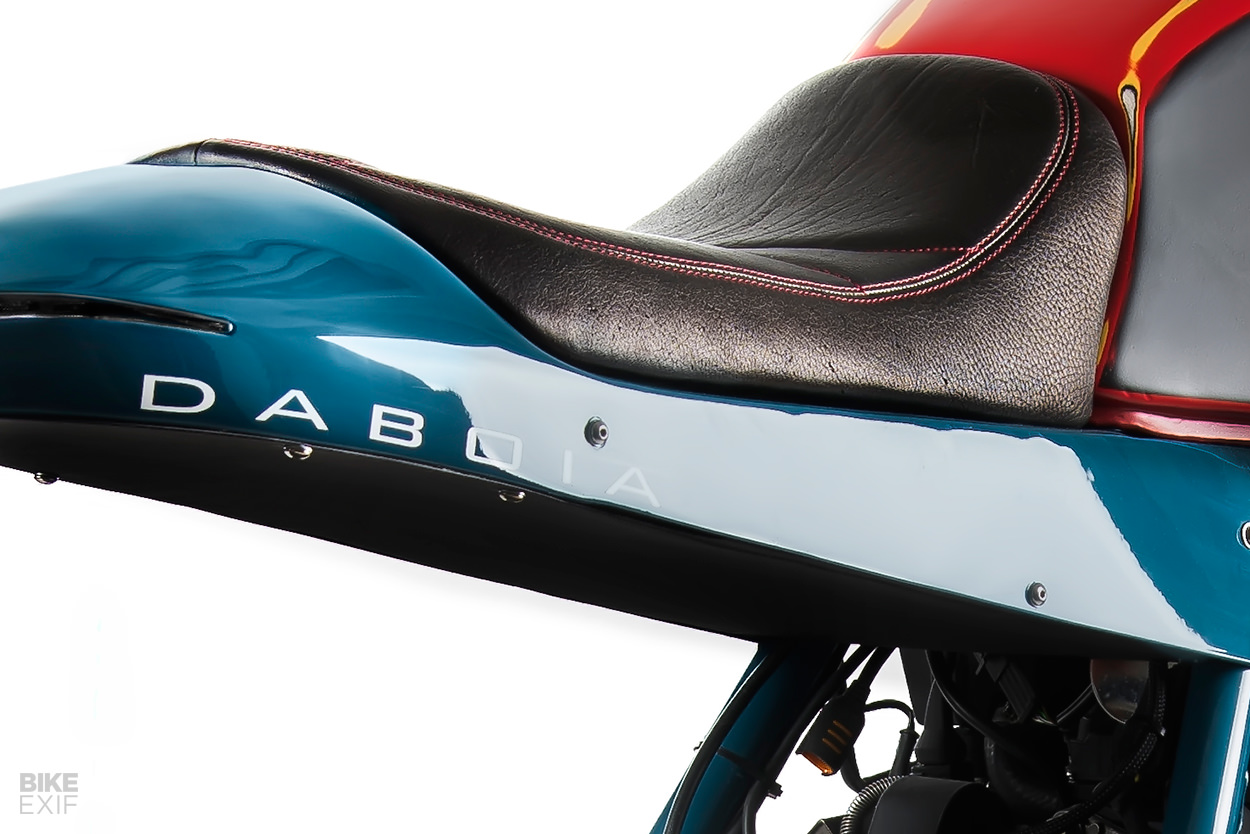 Marco’s done the near-impossible: made the K75 look really good, while still keeping parts that usually make it look really bad. Add in a wacky color combo that actually works, and you have a winner. 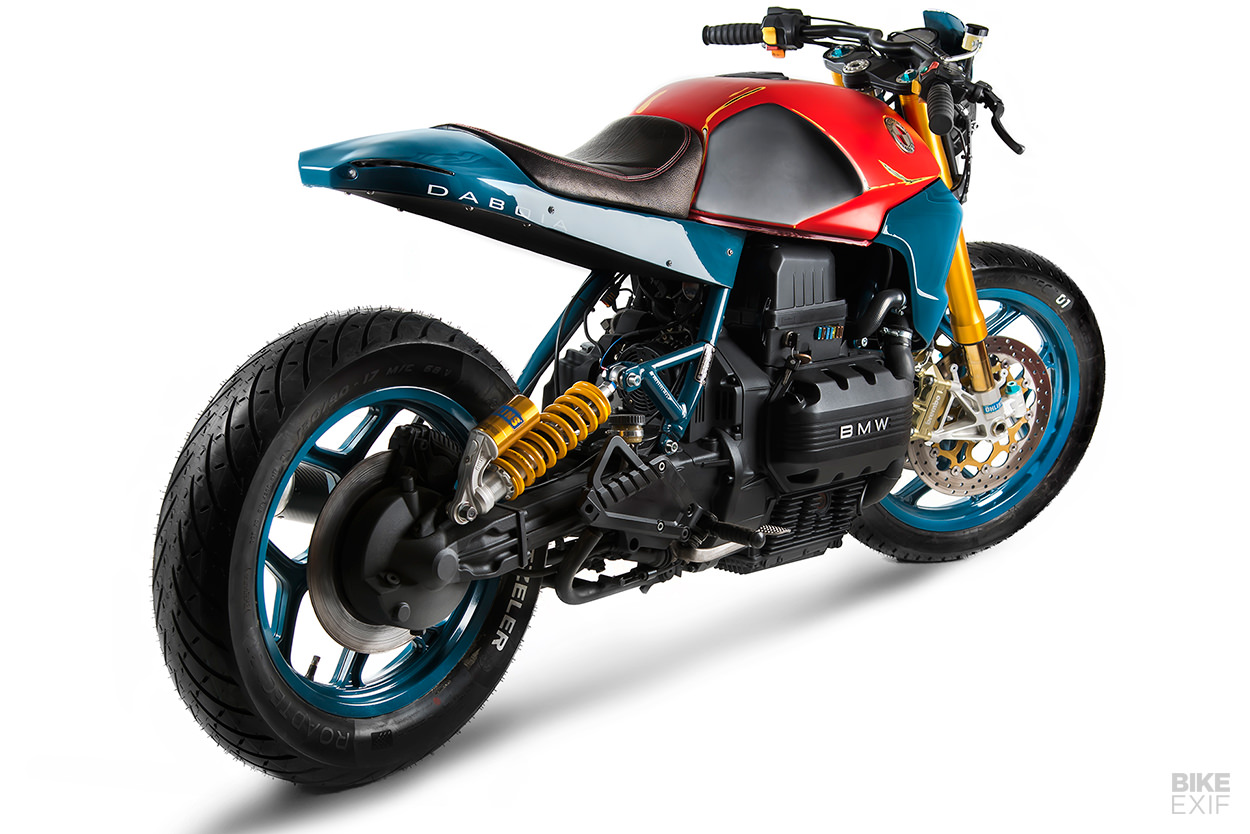