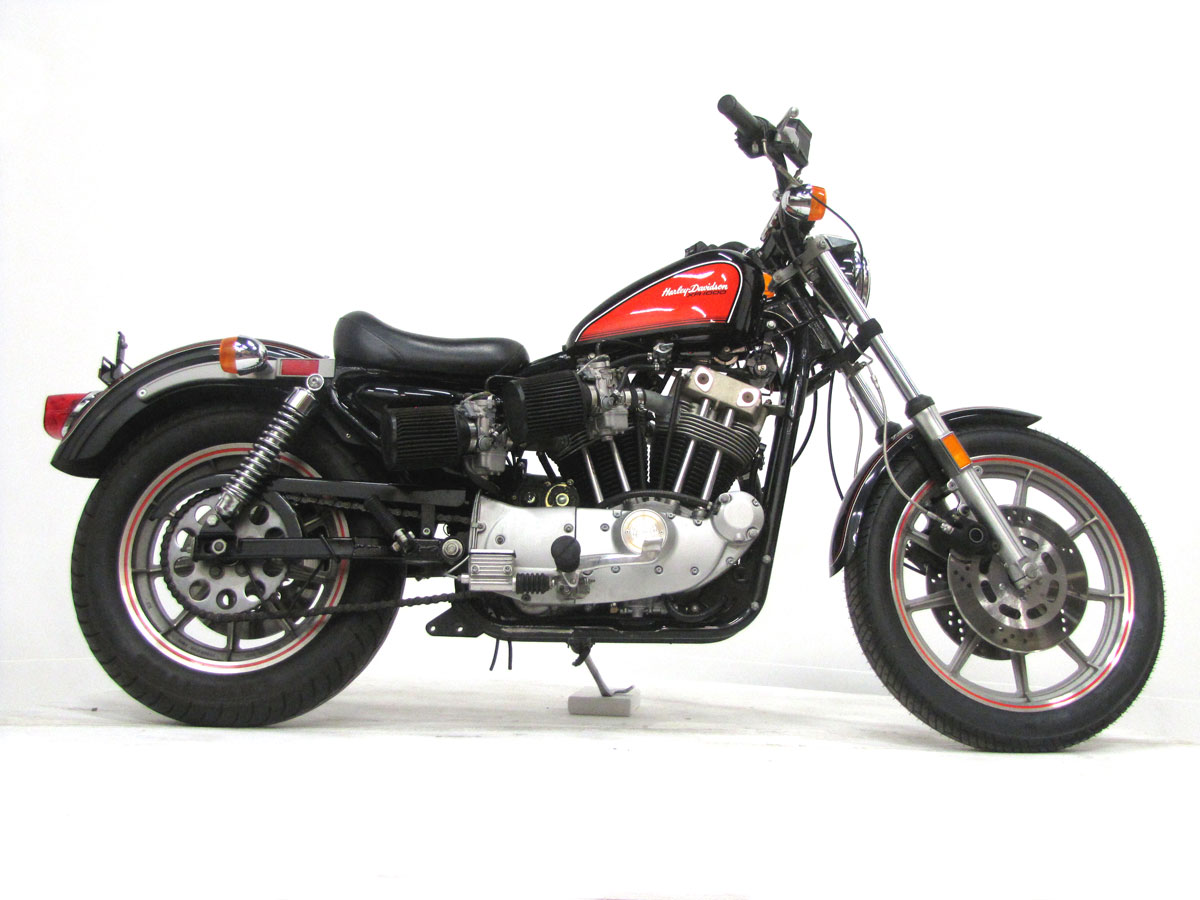 One of the beauties of the Harley-Davidson Sportster and its long run is the relative ease of parts swapping by the Motor Company to make new machines. And after waiting for ten years for a street version of the supreme race winning XR750, something had to give in the Harley performance category.

So Harley-Davidson took their newest, 1982 Sportster chassis and engine bottom end, and added new, better cylinders and heads and through bolted them to the crankcase. Jerry Branch had a hand in developing the heads and his shop built each one for the Motor Company. Similar to the XR750, a single carb with competition-look K&N air cleaner fed each head. The exhaust was high level, again with a nod the the XR750. Wheels were handsome cast aluminum, similar to magnesium Morris road racing wheels of the time. But tank, fenders and seat were more conventional, did not share the wonderful styling lines of the track-only XR750. Paint was more subdued as well; most of the two year run were charcoal in color, a run of 177 were black with orange. Harley also advertised a hop-up kit with 10.5:1 pistons, hotter cams and an unmuffled exhaust system that claimed to offer an extra 20 horsepower.

Recall this bike had a short development time of just a few months and came about soon after 13 Harley-Davidson executives had bought the company from AMF. It arrived in time for the Ronald Reagan tariff which jacked the price on imported motorcycles over 700cc’s by 49%. Still, where the basic XLX Sportster was just $3995, the XR1000 was nearly $7000 so never sold well. But it was a race shop bike of sorts and at least the engine figured into four Battle of the Twins championships from the team of Don Tilley, tuner and Gene Church, rider. Project leader Dick O’Brien nicknamed the race bike Lucifer’s Hammer.

Today XR1000’s, like XLCRs, are sought after by collectors. By most standards of the early 1980’s when the British industry was gone and Italian and Japanese bikes ruled the performance wars, the XR1000 was not competitive but is still a cool piece of Harley-Davidson history. And with only about 1100 built 1983 and 1984, and for 1984 less than 200 in the black and orange we see here, it’s relatively rare.

This nice, stock XR1000 has been owned by David Allbaugh since new. Wanting to share the bike with future National Motorcycle Museum visitors David decided to loan the bike for display. It’s one of over 65 Harley-Davidsons of all types from 1909 forward you can see when the Museum reopens.