Candy Crush: The last CB750 Origin8or will ever build 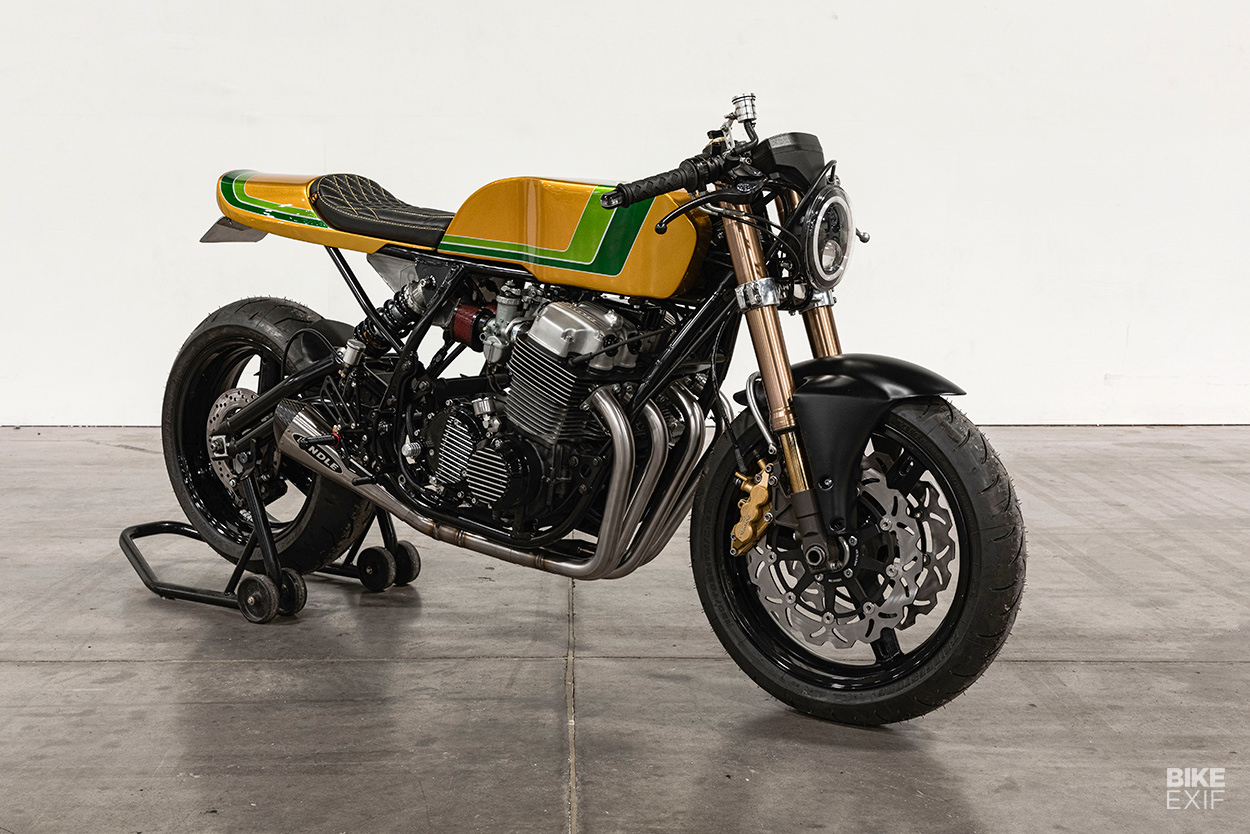 When Bike EXIF lit a fire under the custom scene ten years ago, Honda CB750 cafe racers showed up everywhere. And there was a simple formula for customizing them: ditch the fenders, loop the subframe and slap on a bench seat. Then add pipewrap and Firestone Deluxe Champions for extra credit.

We’ve entered a new decade now, and that recipe is well and truly played out. So here’s a fresh look at the iconic 1970s Honda, from Rob Chappell of Origin8or in Ontario, Canada. 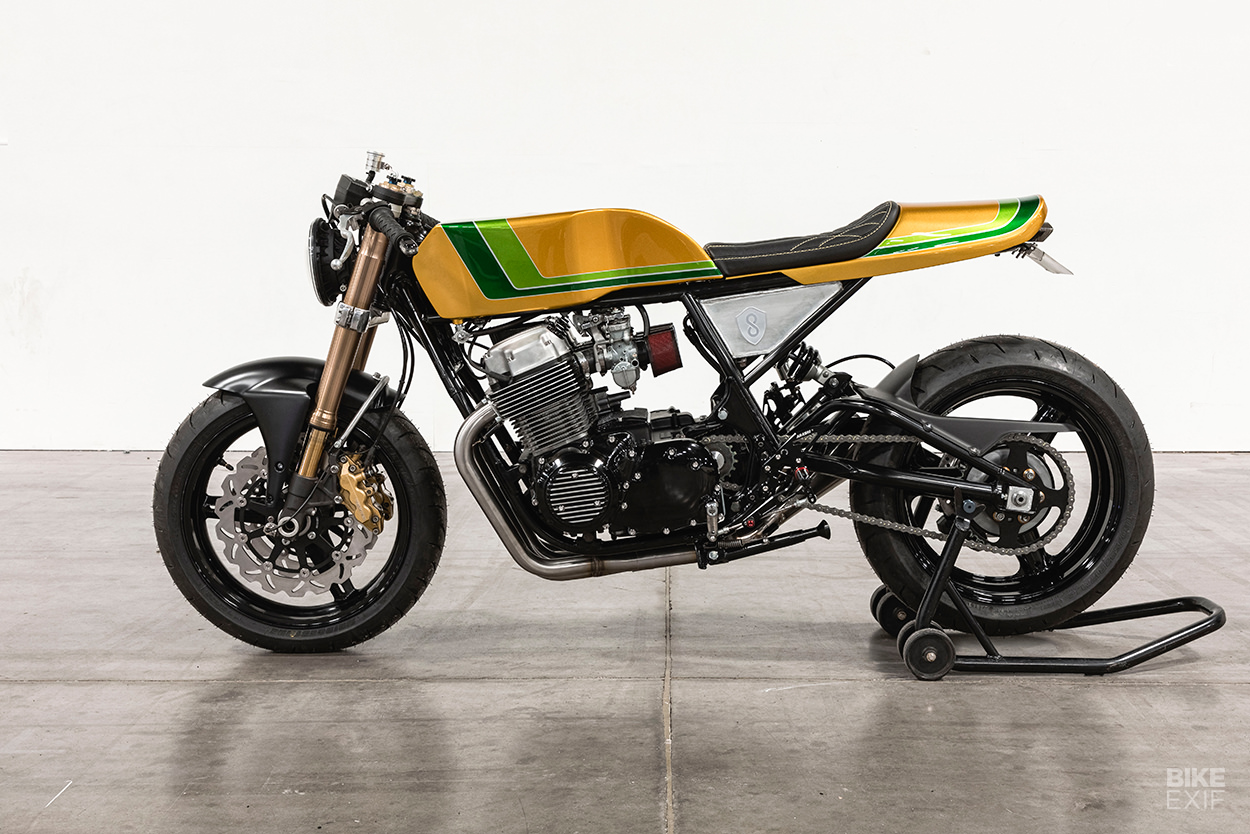 Instead of leaning on clichés, Rob’s given the CB750 hits of 80s and 90s muscle bike style, with some contemporary performance upgrades in the mix too. Only fitting for a bike that’s widely know as the world’s first ‘superbike.’

Rob originally founded Origin8or alone, but these days he’s helped by a South African transplant, Adrian Taljaard. And they pieced this 1974 CB750 together from almost thirty boxes of parts that arrived in the back of a van. 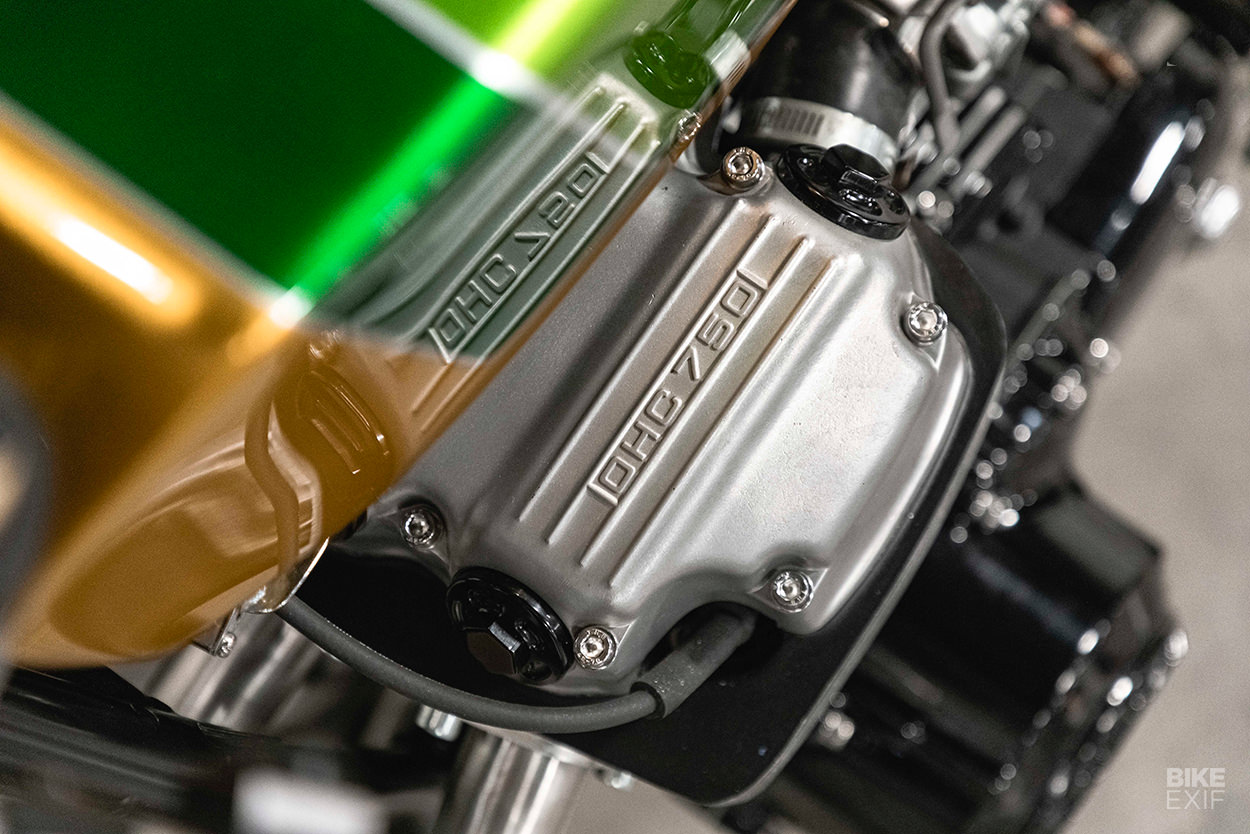 “When a customer says they’ve taken it apart,” Rob says, “I usually think the motor is out of the frame and the forks and wheels are separate. In this case every single nut and bolt was bagged and tagged, in their own boxes.”

“The customer had it sitting that way for about three years, and finally gave in to the fact that he was never going to finish it, and so he called me.” 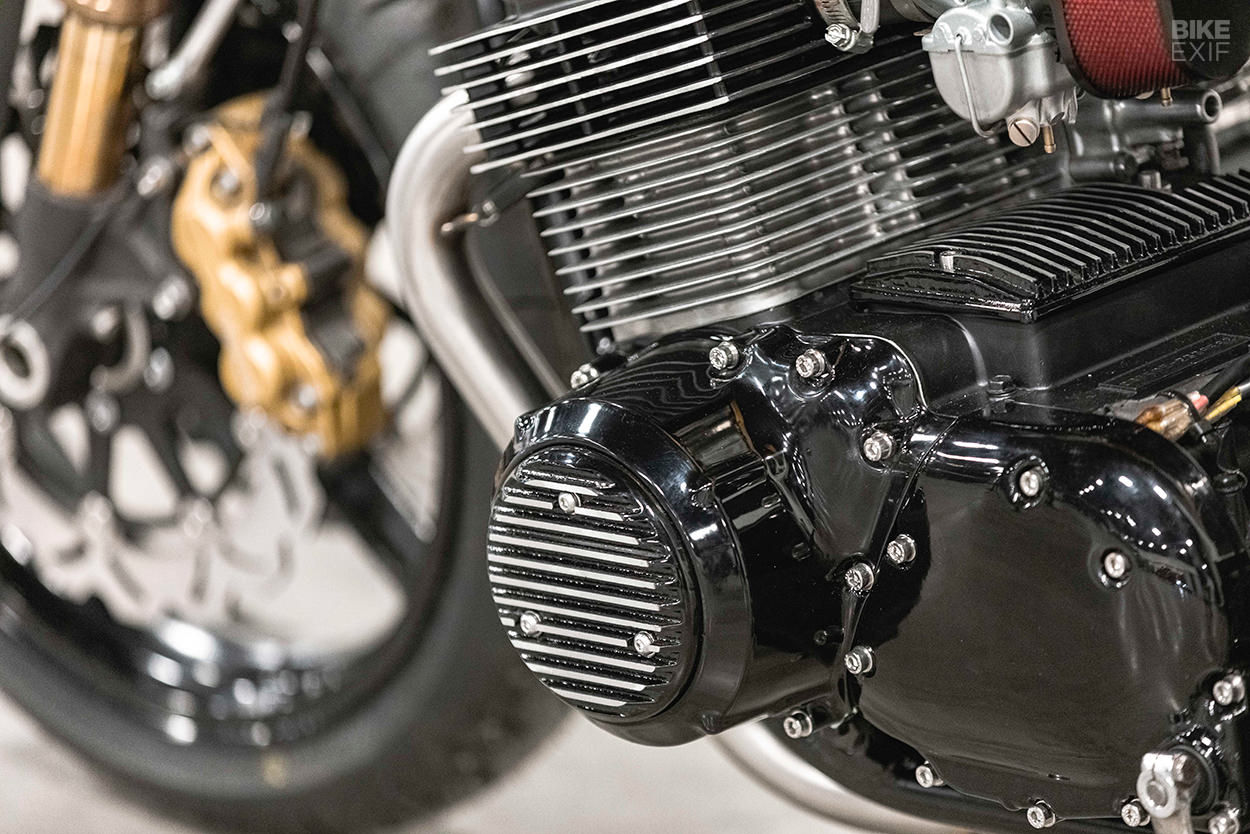 Rob and Adrian went to town, overhauling the bike from the inside out. The engine parts and carbs went off for vapor blasting, before everything was reassembled with new bearings, gaskets and ring. The cylinders were honed, the valves lapped, and new valve seals installed.

Origin8or also installed a set of finned engine covers from Vintage CB750, and a set of CNC aluminum valve tappet covers from J.Webster Designs. Hindle came to the party with a custom four-into-one exhaust system, executed in a modern style. 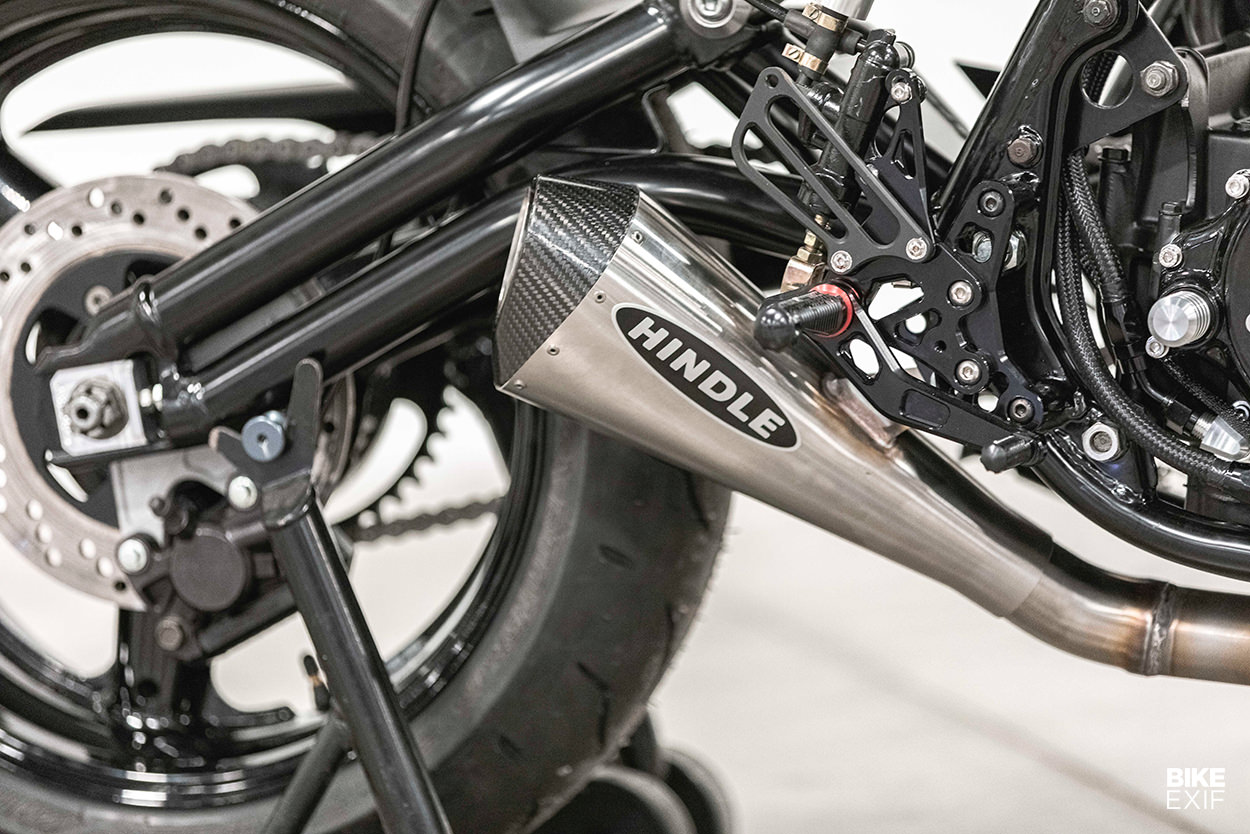 The wiring was overhauled too, and now runs off a Motogadget controller, with a small Lithium-ion battery powering it.

Moving to the chassis, the crew refurbished and installed the complete front end from a 2003 Suzuki GSX-R1000. They brought over the Suzuki’s yokes, forks, wheels and brakes, with a few custom modifications thrown into the mix. 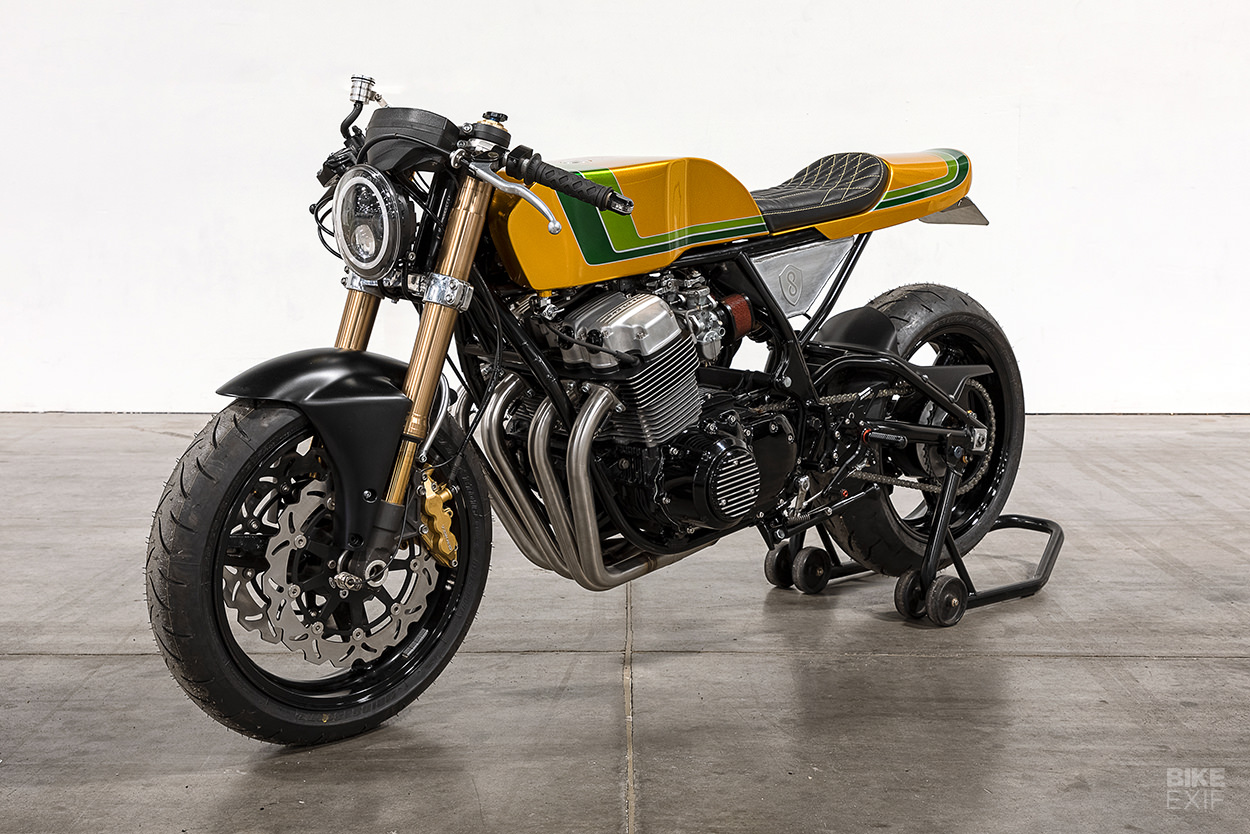 The top triple was machined to remove its ignition mount, and to accommodate a digital speedo. And a custom bracket was built lower down, to mount a Ducati 748 fender to the upside-down forks. The brakes were upgraded with EBC pads and braided stainless steel hoses.

Origin8or went to town on the back half of the Honda too. They took a 2015 Kawasaki Ninja 650 swing arm, shortened it by 3.5”, and installed it via a totally custom pivot setup, using new needle bearings and spacers. It’s connected to a Ducati 821 shock, which in turn bolts to a mounting point on the all-new subframe. 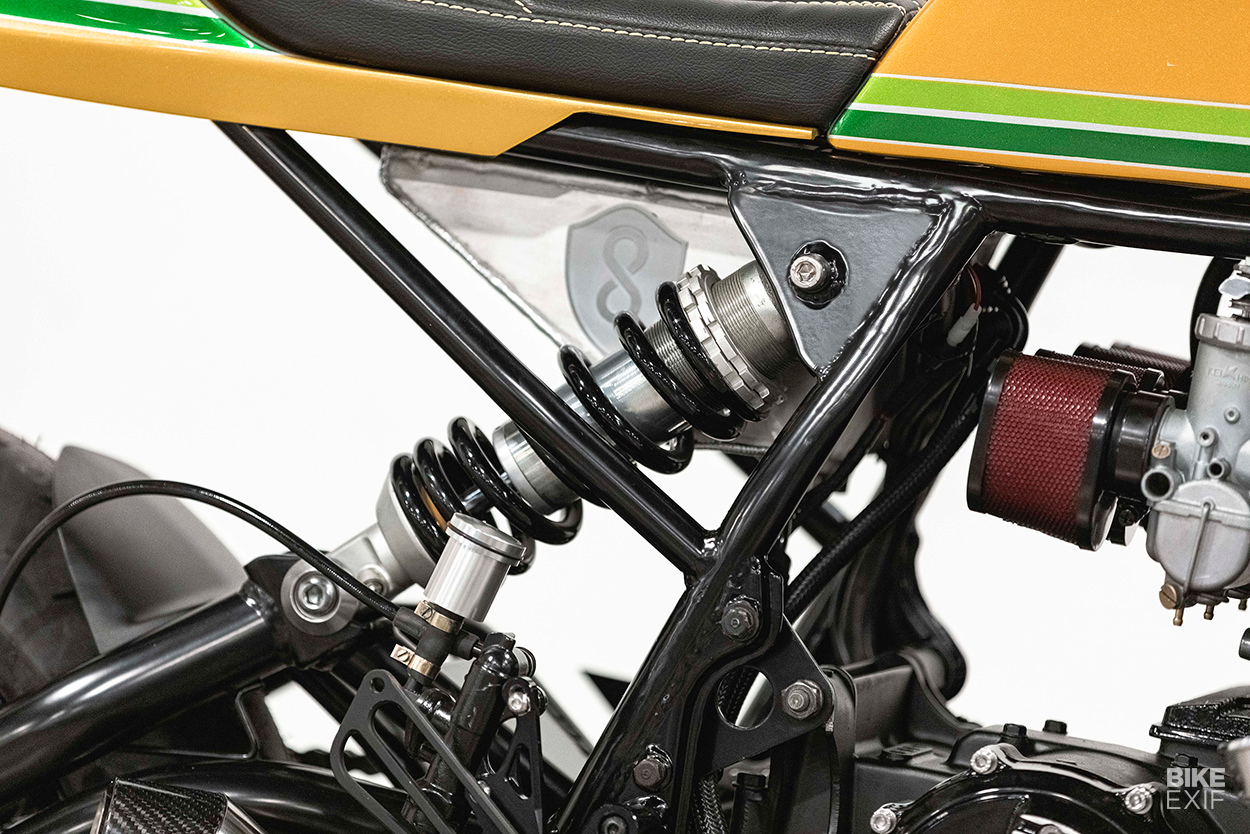 The rear wheel’s from a 1994 Suzuki GSX-R. Rob had to make custom spacers and fettle the sprocket setup to get the offset right, while Windmill Motorsports supplied a pair of custom-made axle plates.

That sorted the CB’s stance and handling, while a new set of clip-ons and adjustable rear sets took care of ergonomics. But it’s the hand-made bodywork that sends this build over the top. Rob fabricated a new aluminum gas tank and an oil reservoir, capping the former off with a flush mounted pop-up gas cap. 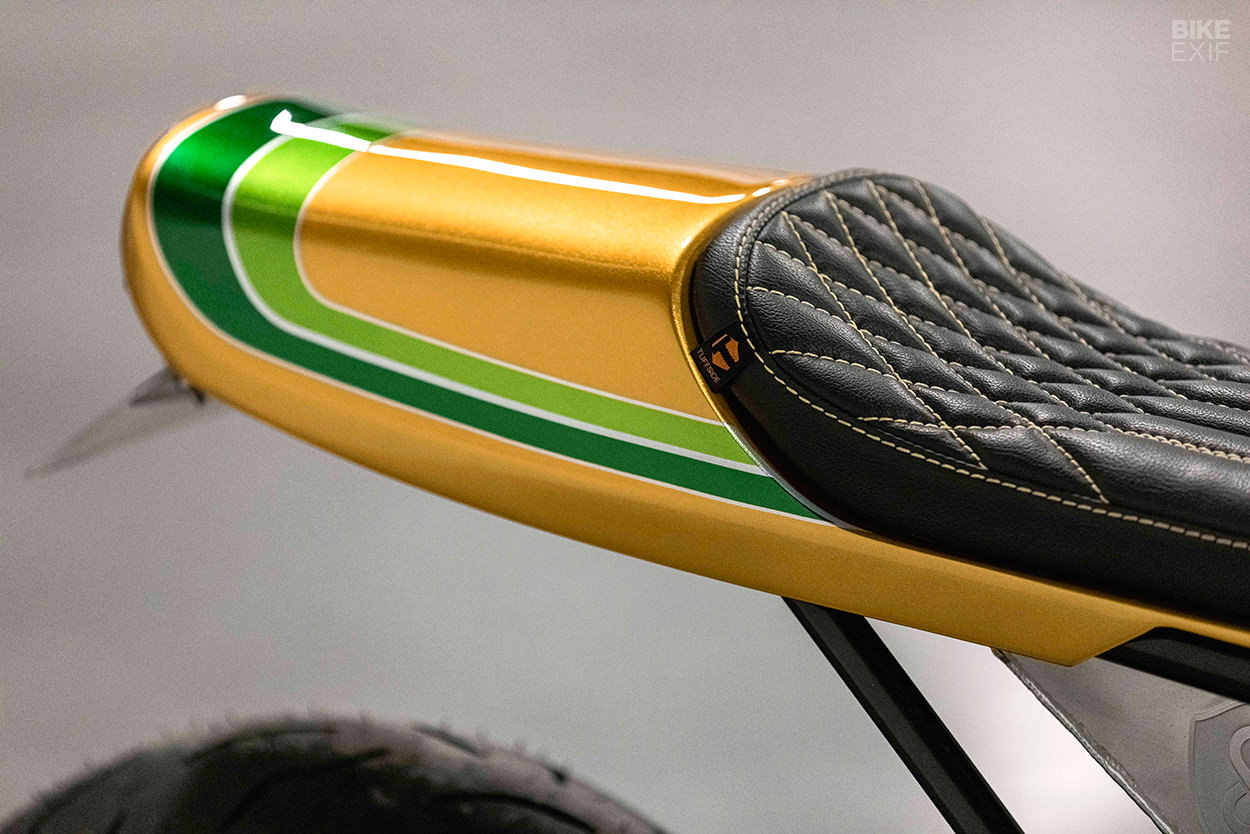 The tail section is Rob’s work too. It’s shaped from fiberglass, and takes cues from the classic Kawasaki KZ-series. For the seat, Rob turned to his brother Chris at Tuffside, who whipped up a special order with both contrast stitching and a pretty unique pattern.

Finishing touches include an LED headlight, bar-end turn signals, and an integrated taillight. Every last bit was powder coated or polished—or, in some cases, both. (The engine covers were first powder coated, but then the fins were polished for contrast.) 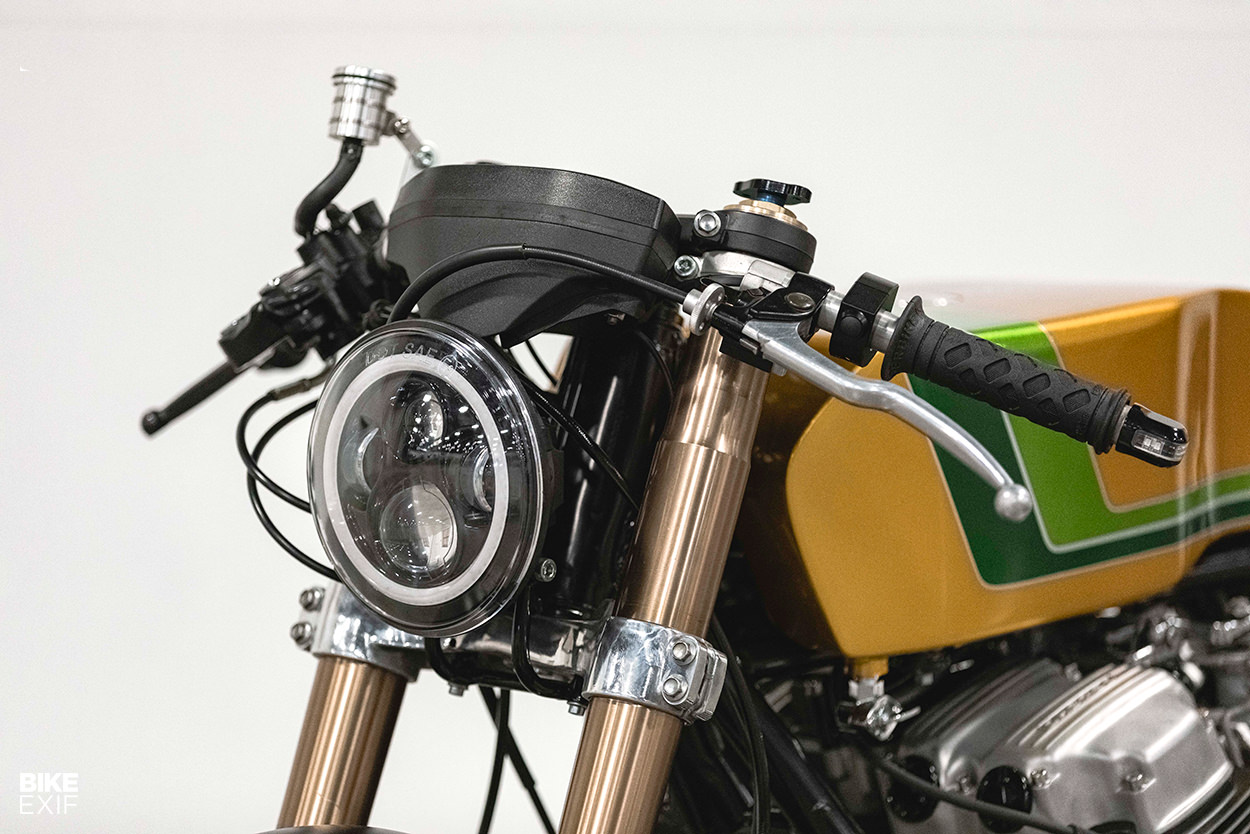 This would have been an impressive build in black and white even, but that luscious paint scheme is what sets it apart. Even if it wasn’t exactly what Origin8or’s client ordered… “The customer allowed complete creative freedom,” Rob says, “even down to the color—sort of. The original request was a cafe racer in green.”

“Close to the finish line I called him and asked: ‘Are you certain you want a green bike?’ To which he replied: ‘Do what you like, I trust you.’” 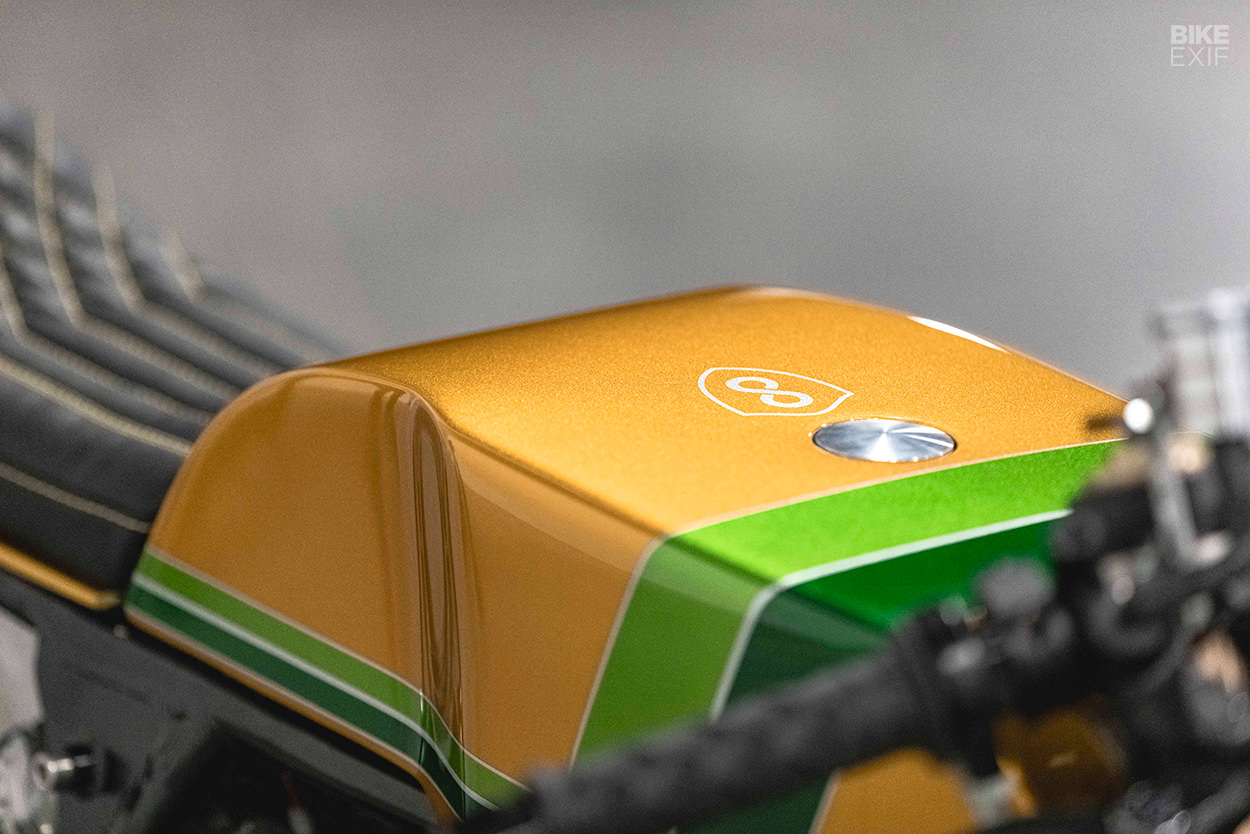 So Rob picked House of Kolors’ ‘pagan gold,’ with lime and racing green stripes, executed flawlessly by Mat Tobin at Jensens Custom. “So in the end, he got some green stripes as a nod to the original request,” he quips.

It’s not the first time Rob’s whipped up a CB with this neo-retro vibe (he’s built not one but two CB900Fs like this before), but it’s probably his last. And his reasoning is simple: he’d rather create something new each time than get stuck in a rut. 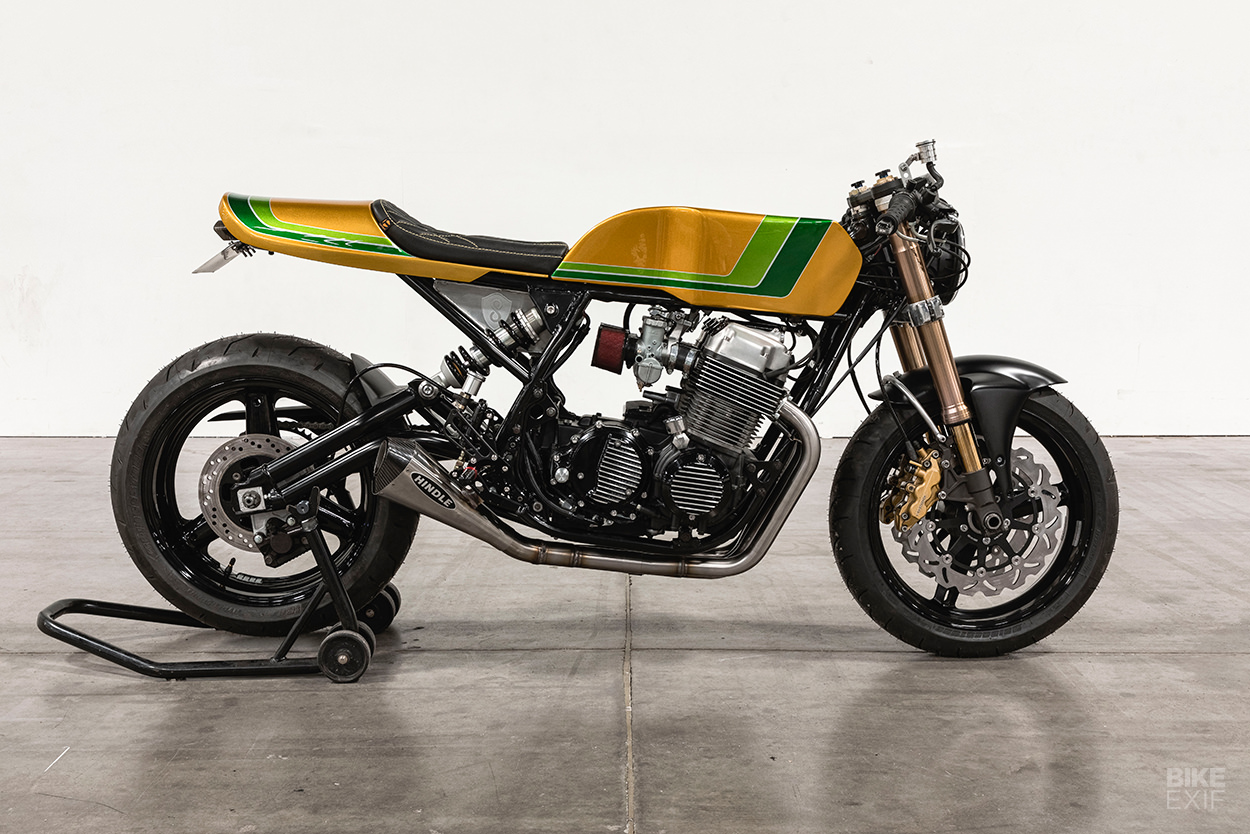 We get it, but we’re also bummed out—because we reckon Origin8or are onto something here. And it’s a damn sight sweeter than the scores of me-too CB750s out there. 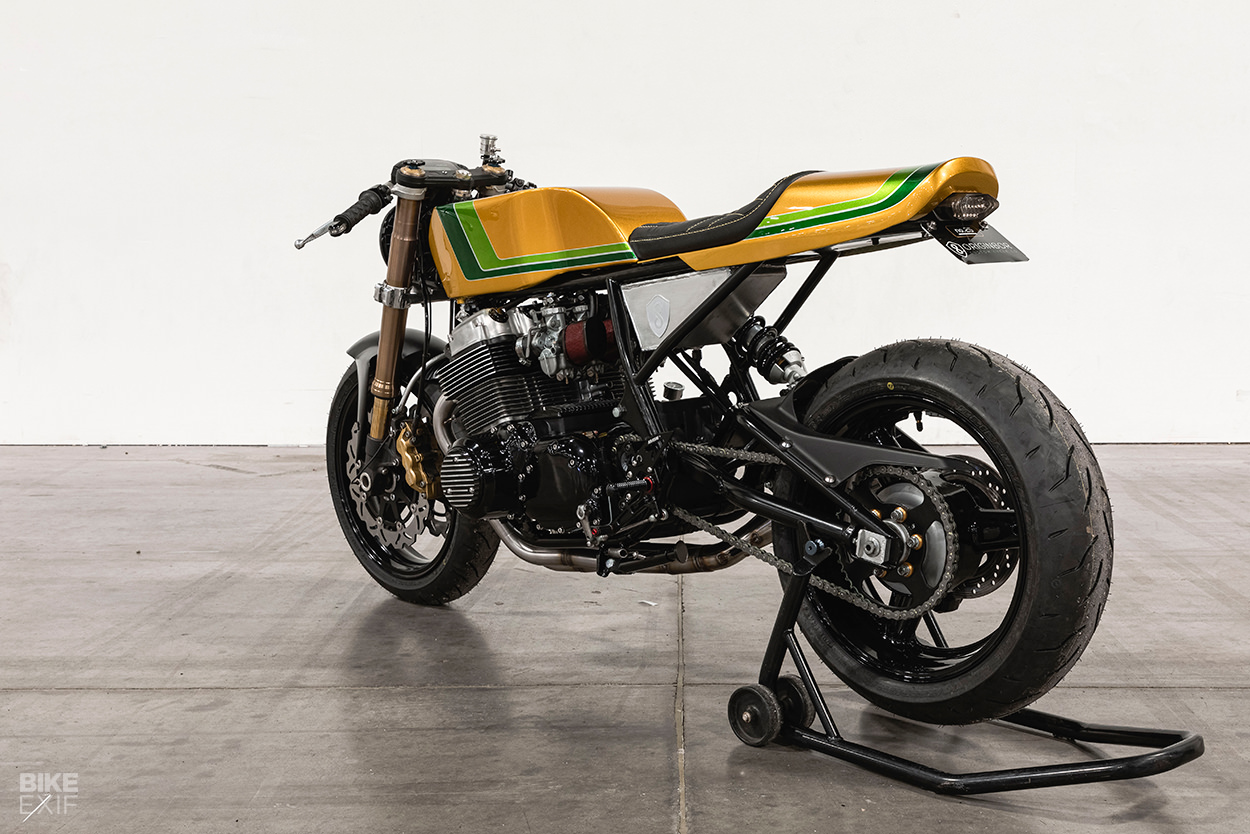