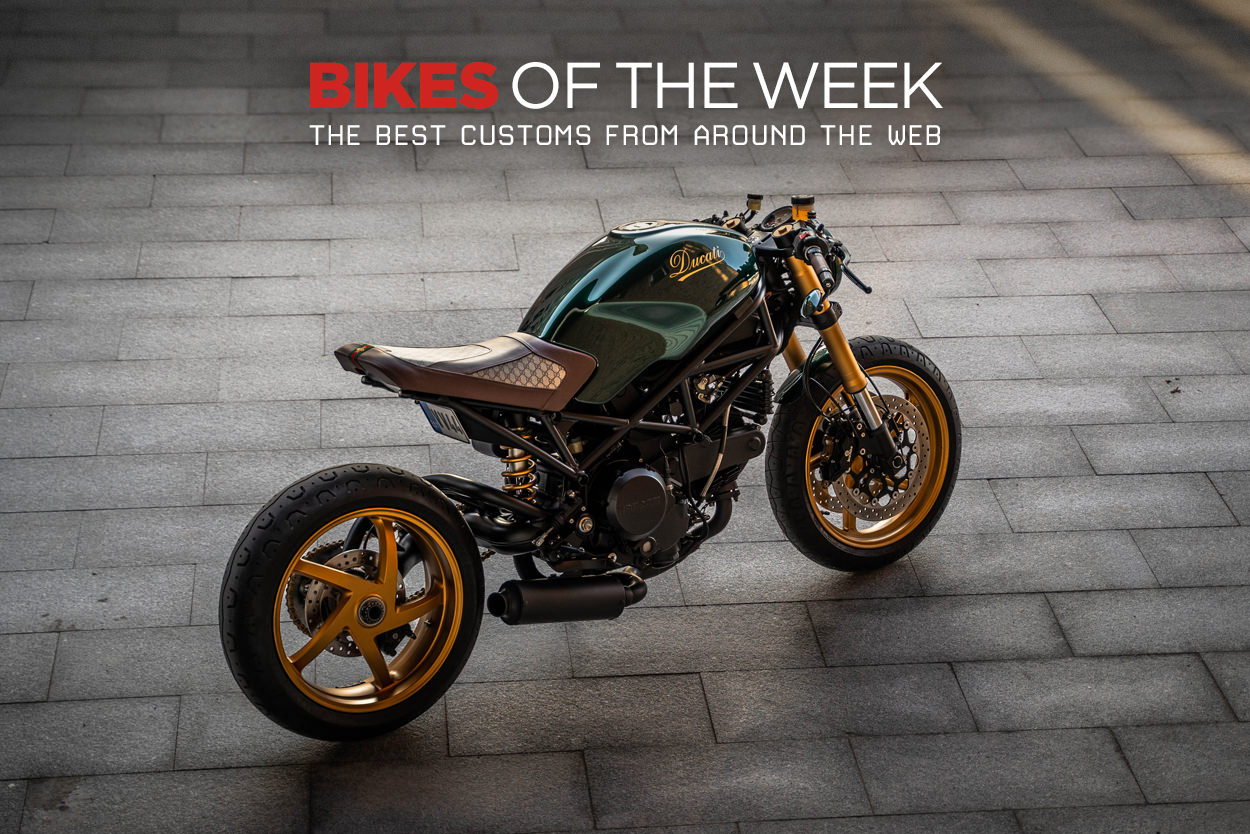 A Gucci-inspired Ducati Monster S2R from Estonia, a classic Triton from one of Britain’s best builders, plus a short appreciation of Colin Seeley, who passed away last week. You could also win the personal Triumph T140V of Dare Jennings, the founder of Deus, in a raffle to benefit three Australian bushfire charities. 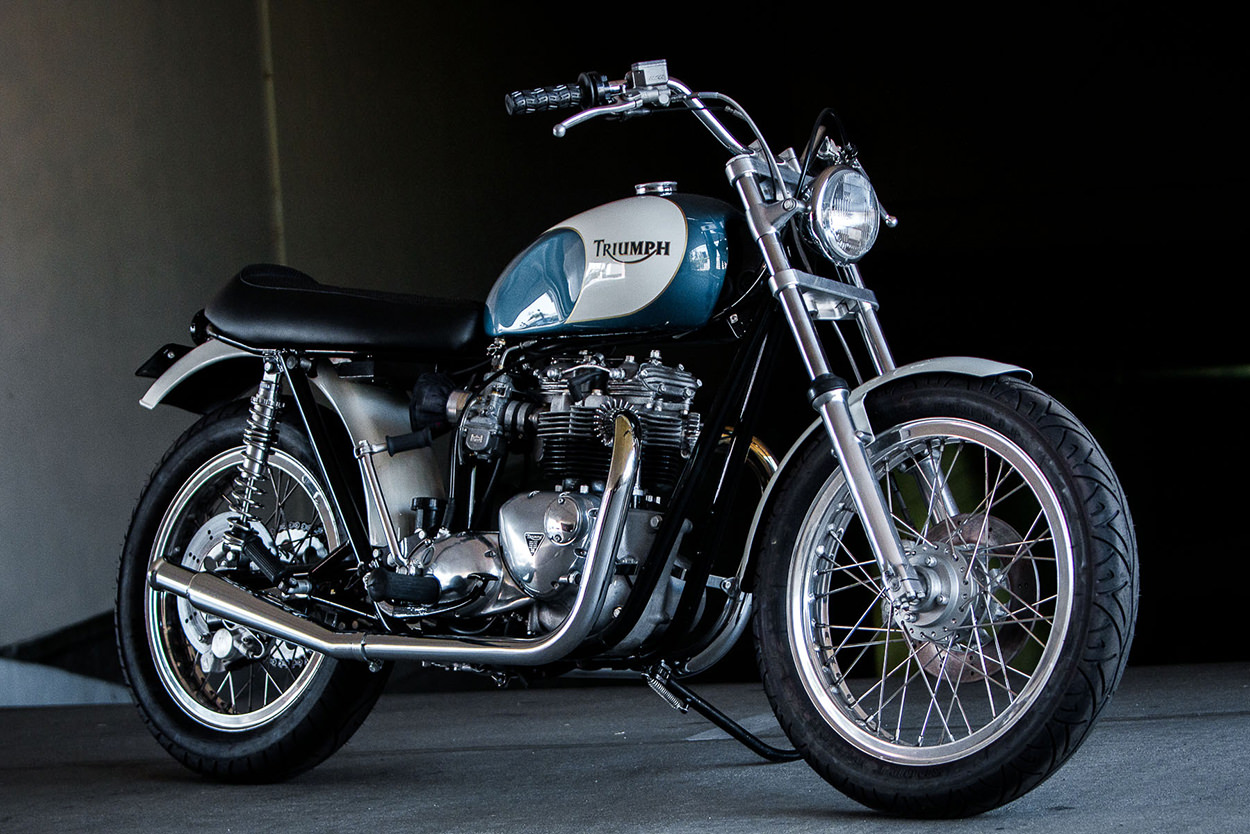 Win Dare Jennings’ Triumph T140V If you follow the news, you will know that Australia is burning. The bushfires have ignited around 11 million hectares so far, which is around 27 million acres—an area larger than the Netherlands or Switzerland, and similar to Vermont and New Hampshire combined.

This is sadly relevant to us because Australia is also home to several of the world’s top custom builders, including one of the pioneers of the current custom boom—Deus, which is headquartered in Sydney. 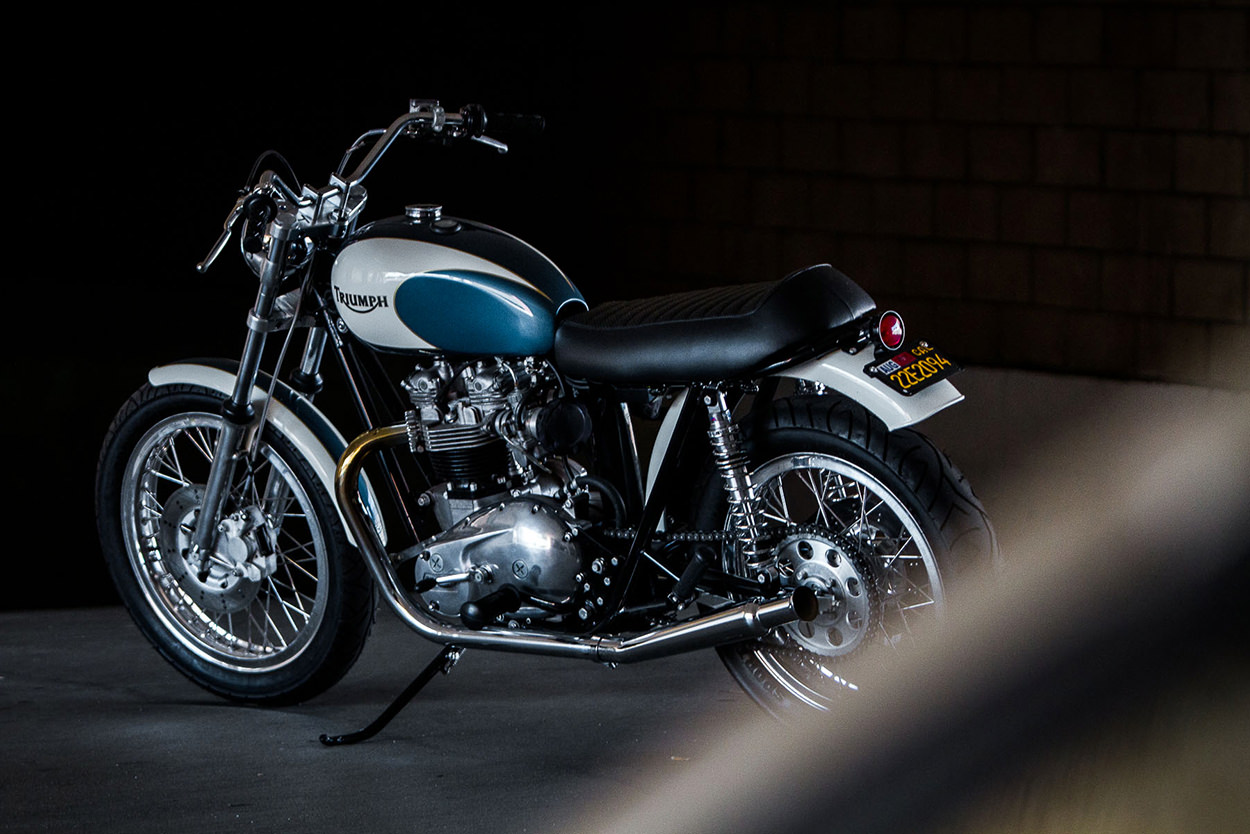 Dare Jennings is one of the co-founders of Deus and he’s raffling off his personal Triumph T140V to raise money for bushfire charities. Every cent from the proceeds will be split between the Australian Red Cross, Save the Animals and the New South Wales Rural Fire Service.

As you’d expect, the bike is an immaculate restoration, and goes as well as it looks thanks to a rebuilt engine. It’s currently in Sydney, and a raffle ticket costs just AU$50. Even if you don’t win, you can rest assured that your money is going to an incredibly deserving cause. Enter here before 17 January. 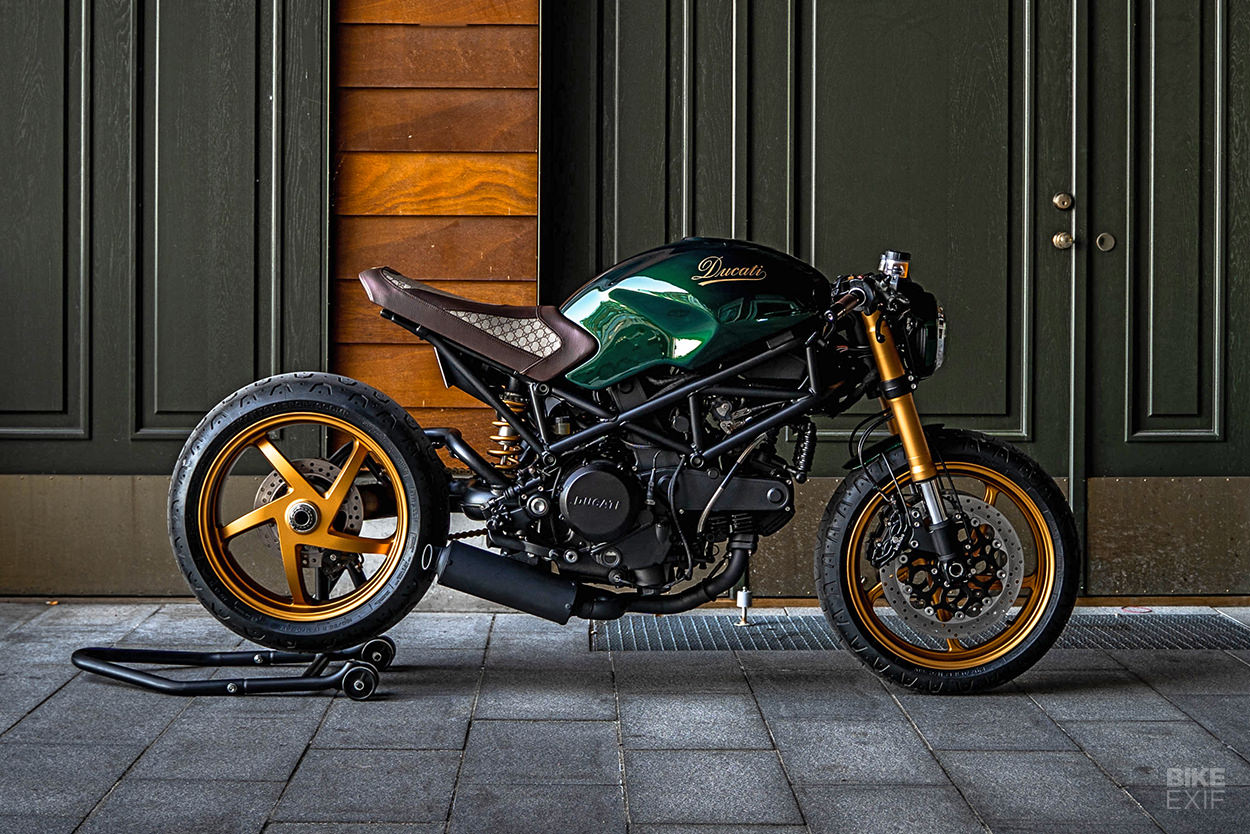 Ducati S2R 800 by KickassTuning The Monster is a brilliant platform for a light custom job, and this S2R from 28-year-old Ingo Kikas immediately prompted us to scan the local classifieds when it landed in the EXIF inbox.

Based in Estonia, Ingo spends his days building and painting project bikes for local dealers and custom shops. But for the past couple of years, he’s also been creating his own customs and the latest is this machine called ‘Gucci.’ 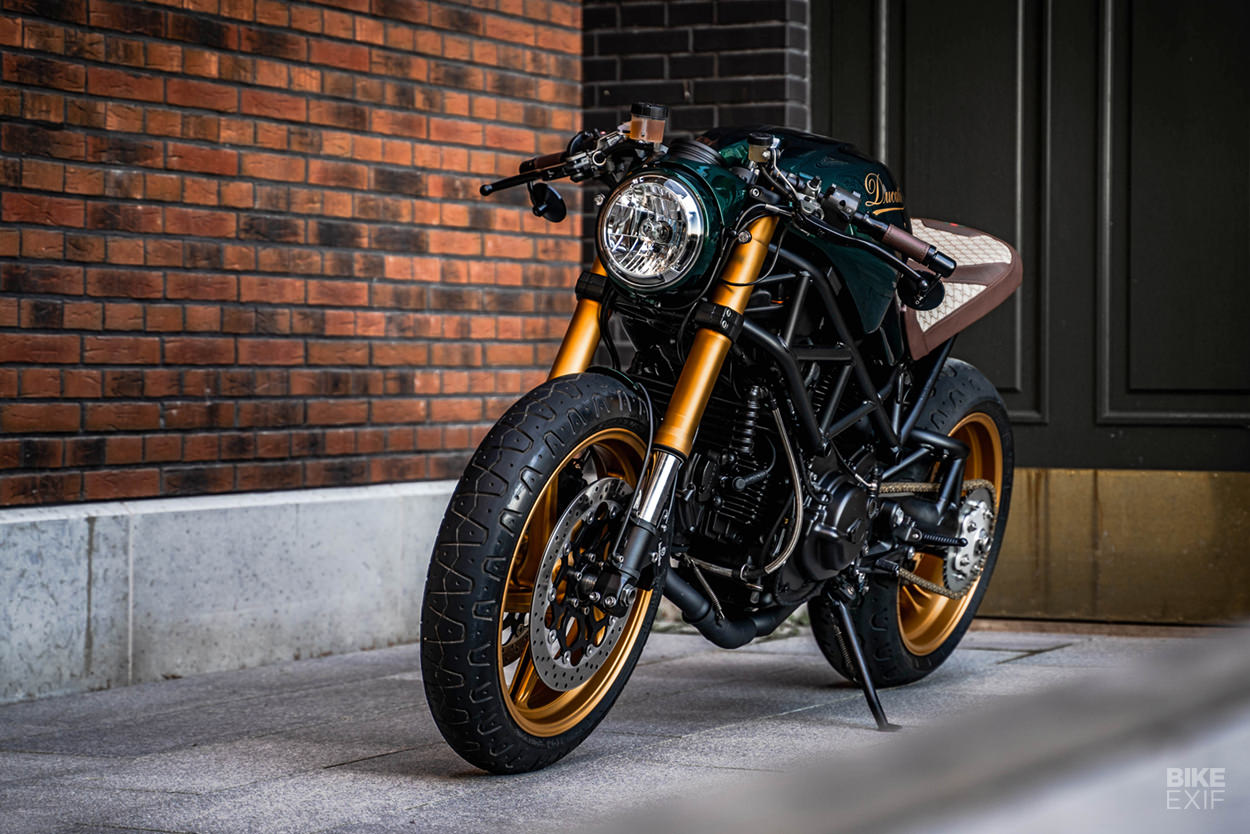 The commission started with a simple re-paint job on a client’s S2R, which quickly morphed into something much more involved. Ingo has given the Ducati a new exhaust system that sits under the engine, a custom solo seat on a truncated rear frame, clip-ons, and brake and clutch master cylinders from a Ducati 1199.

The headlight is from a Scrambler Ducati, and Ingo’s also added an Acewell speedo and small custom fender. The Gucci theme is (thankfully) low key, apparent in the seat upholstery and that lovely ultra-luxe green and gold paint. [KickassTuning Facebook] 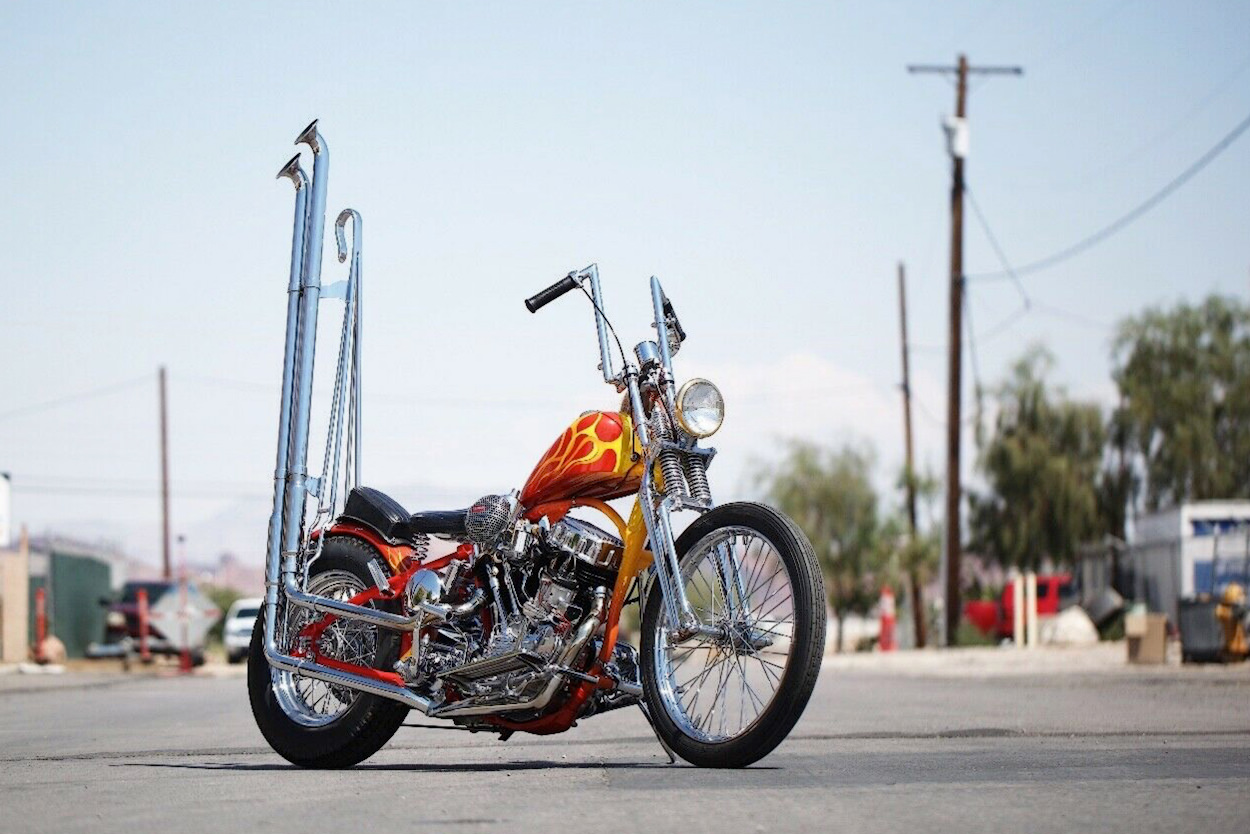 Ultimate chopper: Bones’ Harley-Davidson VL panhead The days of choppers selling for crazy money disappeared around 15 years ago, along with mainstream interest in the genre. But occasionally an interesting bike with real history pops up, like this ’30 VL panhead built by the late William ‘Bones’ Coddington of Bones Legacy in Las Vegas.

Spotted on eBay, it’s a faithful reproduction of the bikes that used to scoot around the Bay Area of San Francisco in the 1960s. It took over two years to build, and uses many of the same components that builders employed half a century ago. 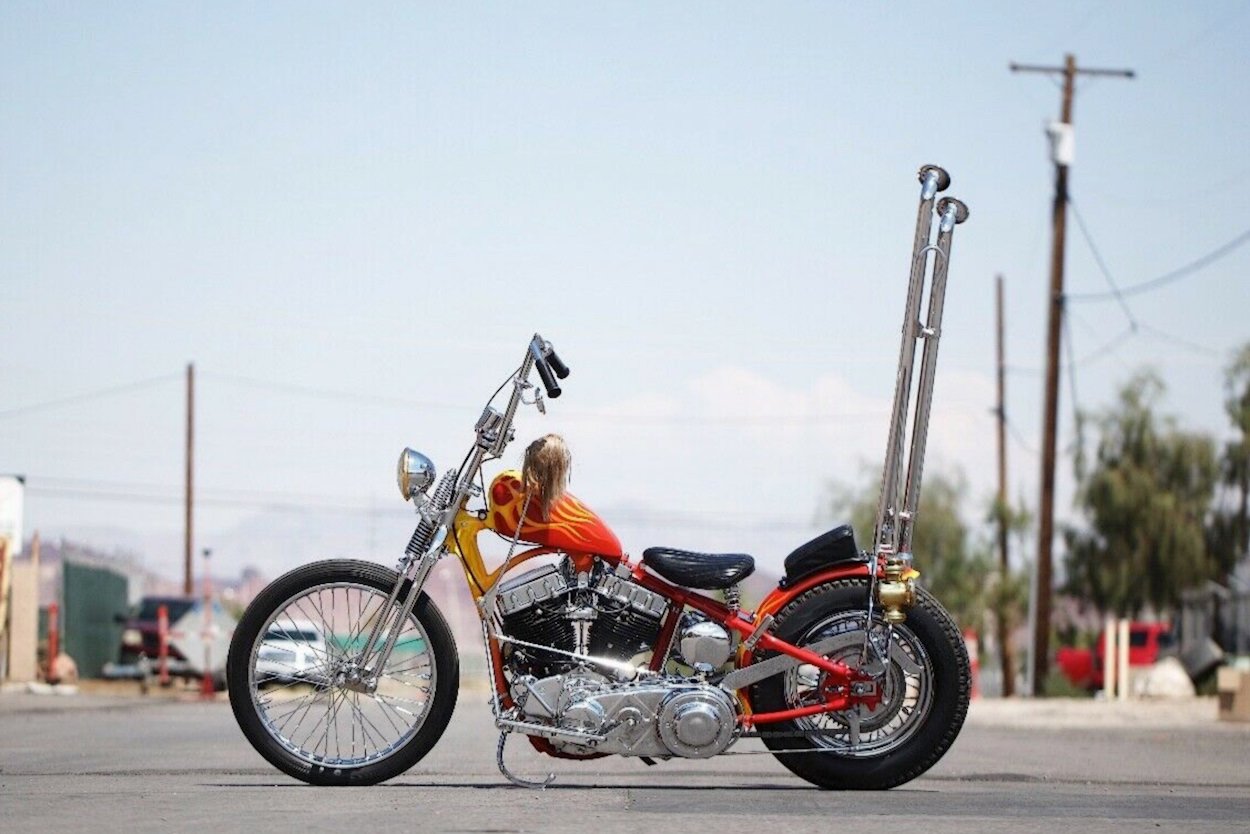 Some are familiar—like the Morris Magneto—while other parts are obscure, such as the SU carb lifted from a Triumph TR3 car. The finned aluminum rocker box covers are from Custom Cycle Engineering, and another authentic ‘60s fitment.

It’s not our usual style, but we’d agree with Easyriders magazine calling this pan the ‘ultimate chopper.’ It’s picked up a claimed 17 bike building awards in the US—from shows such as Born Free and the Dave Mann Chopperfest—and sold for a cool $30,000 a few days ago. [Street Chopper profile] 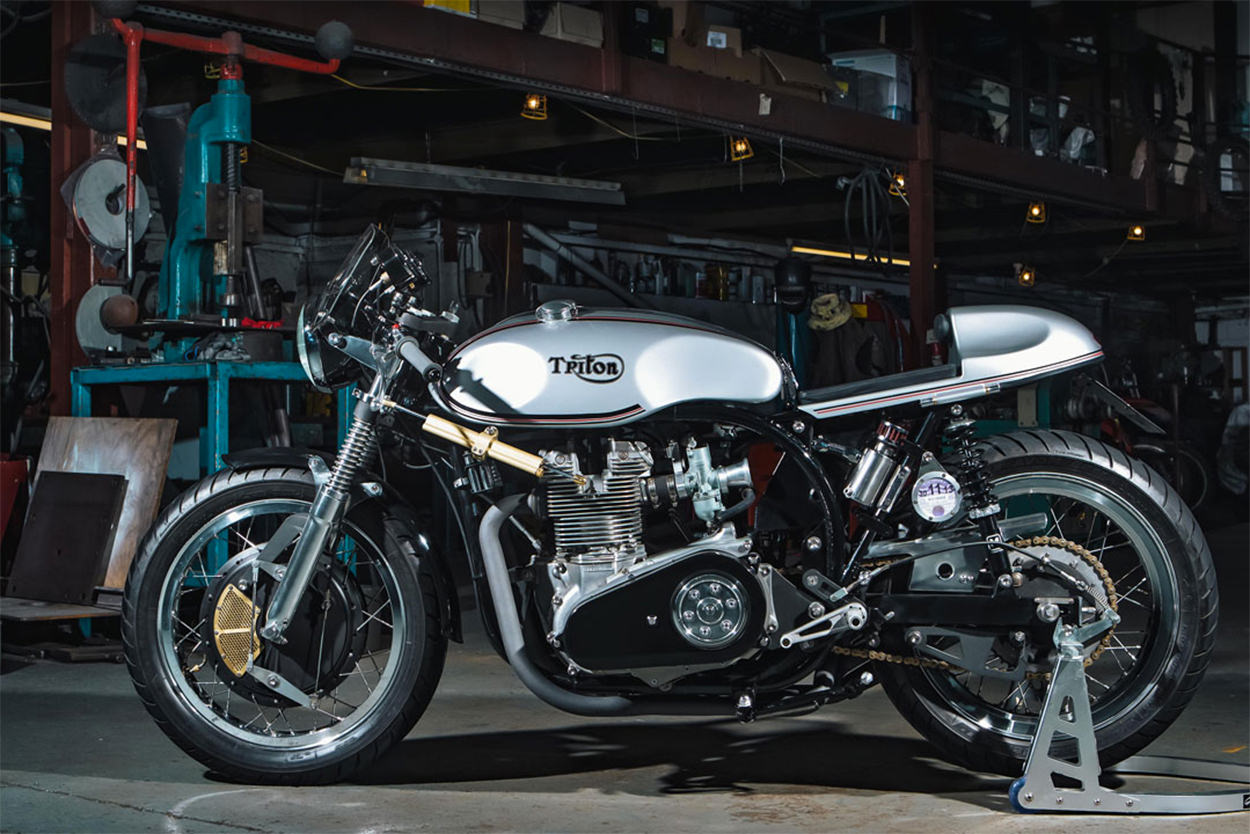 Jim Hodges’ Triton cafe racer When it comes to classic customs, the ‘Triton’ is about as classic as it gets. This beauty comes from Jim Hodges of Team R&D Motorcycles in the UK, a low-key but very reputable operation.

Jim’s bike deviates a little from the standard recipe: although it has a Norton ‘featherbed’ frame, Jim and his two colleagues have squeezed in a Trident T150 motor rather than a traditional pre-unit engine. 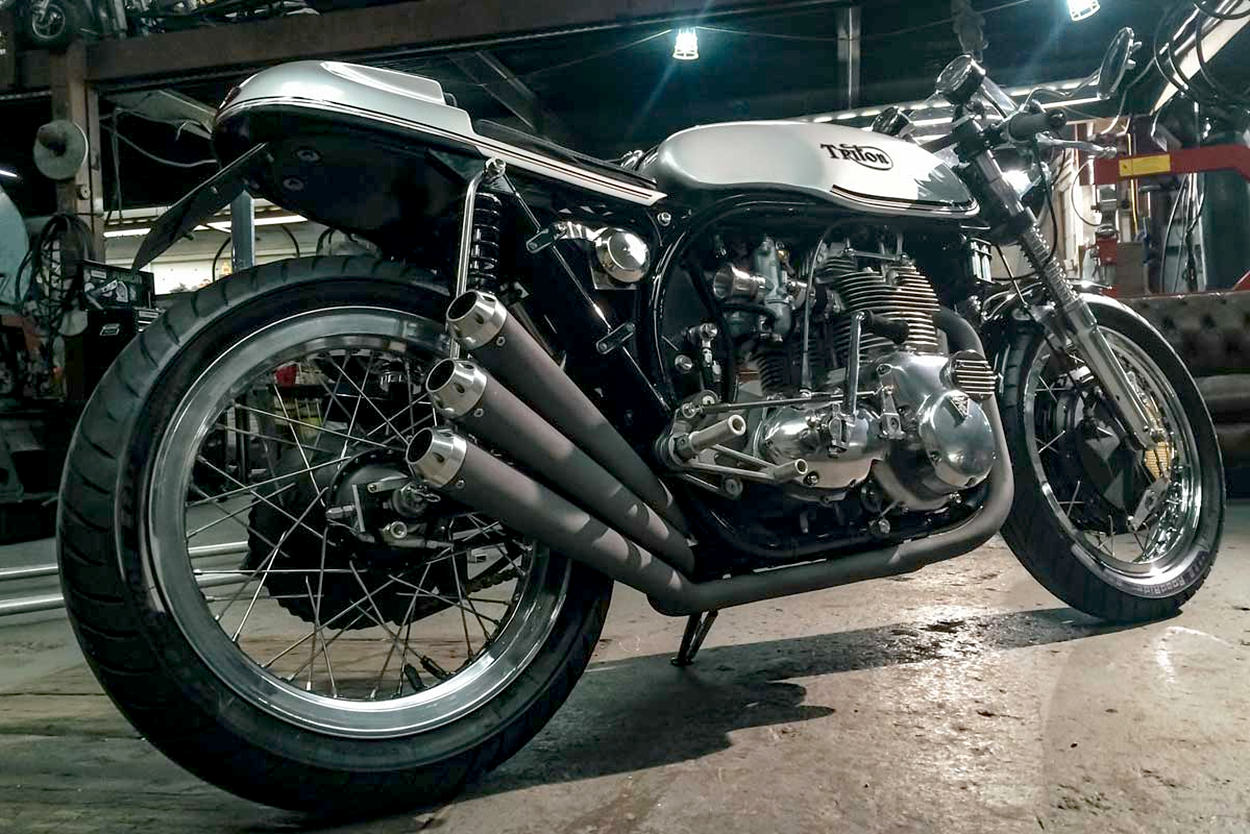 The motor is tuned with uprated cams, pistons and rods, plus a lightweight crank and high-spec ancilliaries and electrics. A tough Quaife five-speed gearbox handles the dyno-proven 80 rwhp output.

There are too many other lovely details to list here, but this isn’t a museum piece: since completing the bike, Jim’s put 3,000 trouble-free miles on it—including several laps of the Isle of Man TT circuit. Bravo. [More] 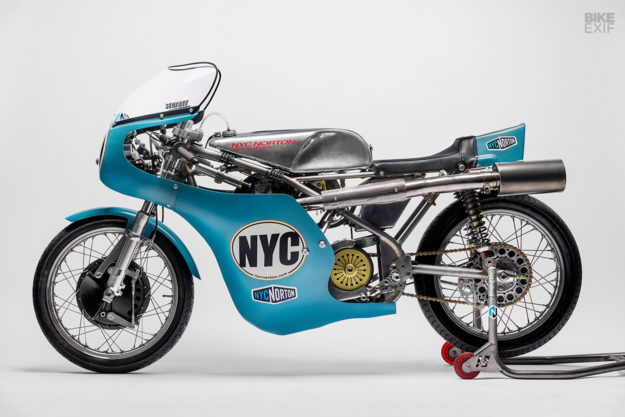 RIP Colin Seeley, 1936-2020 One of the most influential motorcycle identities of all time passed away last Tuesday in England. Colin Seeley was a renowned racer, designer and constructor, who learnt to ride at the age of 16 on his father’s Vincent Rapide.

In the mid 60s, Seeley switched from sidecar racing to building frames for conventional racebikes, using mostly AJS and Matchless engines. By the late 1970s he was selling kits direct to riders wanting to uprate their sportbikes, and put several Honda-powered machines into low volume production—such as a ‘Phil Read Replica’ roadster based on the Honda CB750F2. 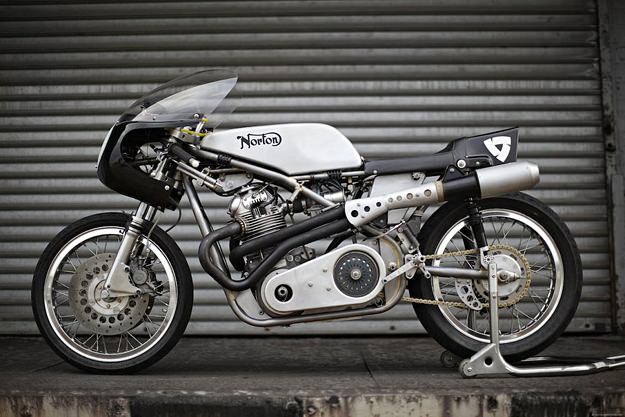 On these pages, Seeley’s influence has been mostly felt through the work of Kenny Cummings, who runs NYC Norton. Kenny’s built some of the most popular bikes we’ve featured over the years, such as the blue and silver Seeley G50 and a modern, monochromatic take on the classic Seeley Mk II Norton racer.

The world works in strange ways these days, so Seeley’s death may revive interest in his engineering genius. We hope to see more Seeley-related builds, to keep alive the name of one of England’s best automotive engineers. 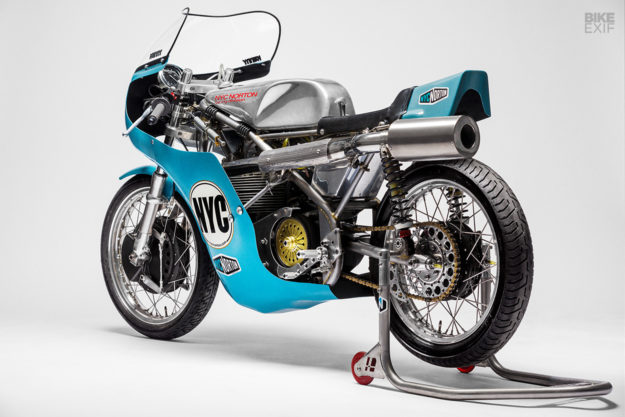