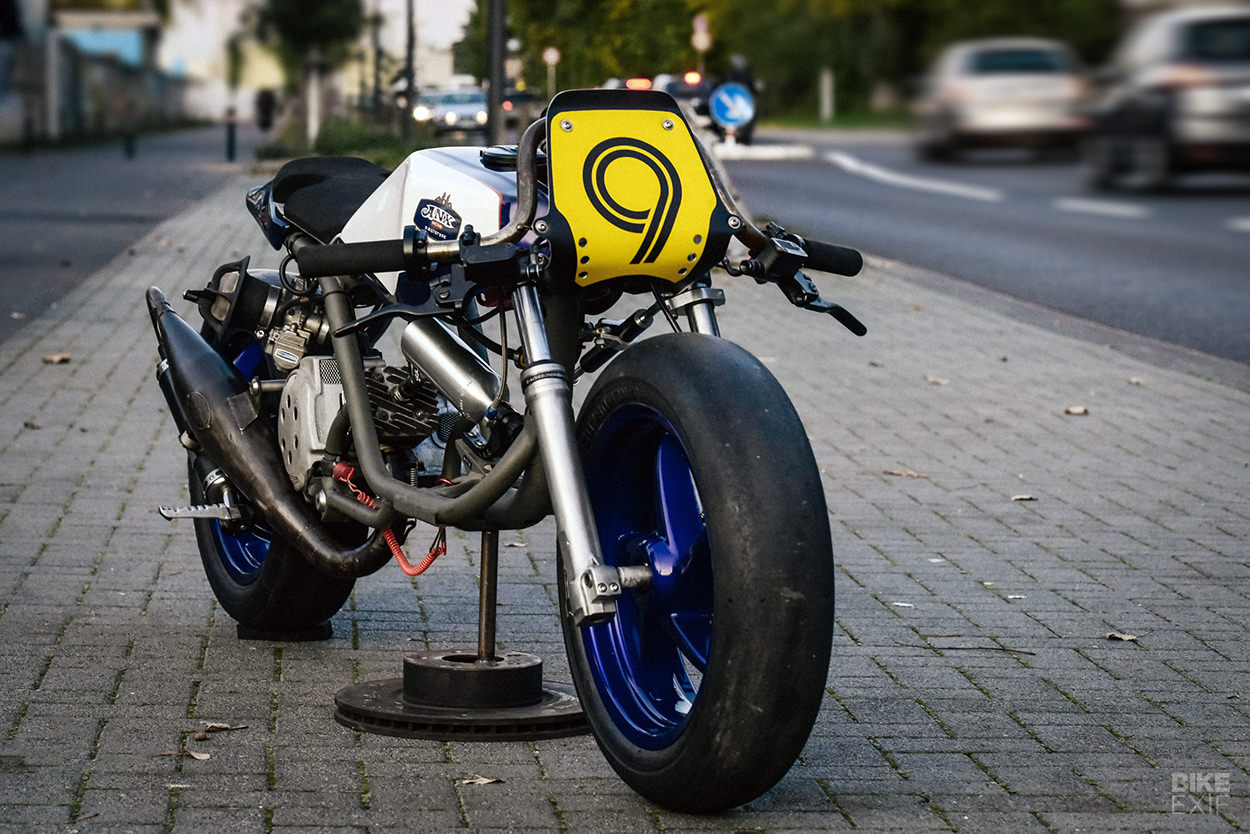 The words ‘drag racing’ and ‘scooter’ shouldn’t belong in the same sentence. But if you ask us, the idea of boosting micro-sized machines to race instead of commute sounds like buckets of fun. Especially when your race bike makes five times its original power, runs nitrous, and weighs next to nothing.

This plucky little sprinter started out as a Piaggio NRG—a 50 cc scooter from the mid-2000s—but it’s come a long way. Power is up from the stock 4 PS to a heady 20 PS, and the curb weight is just 56 kilos—124 pounds. 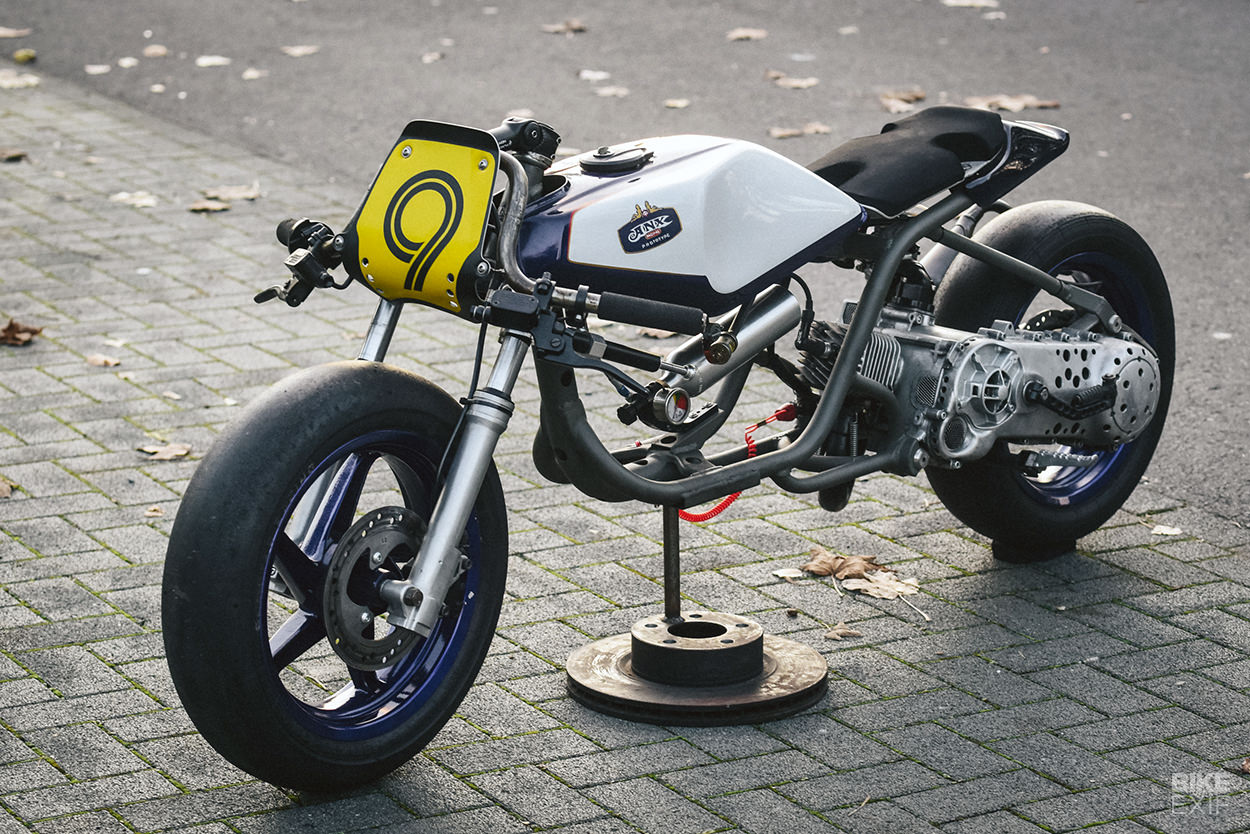 The story revolves around friends and contacts in Cologne’s motorcycle scene. It starts with Nick Xiromeritis—an automotive designer who’s worked as far afield as Japan and France.

“On eBay I was selling a Honda NS400R fairing and exhaust,” Nick explains. “I was contacted by Mirko Toth, through a mutual friend of Jens at JvB Moto here in Cologne.” 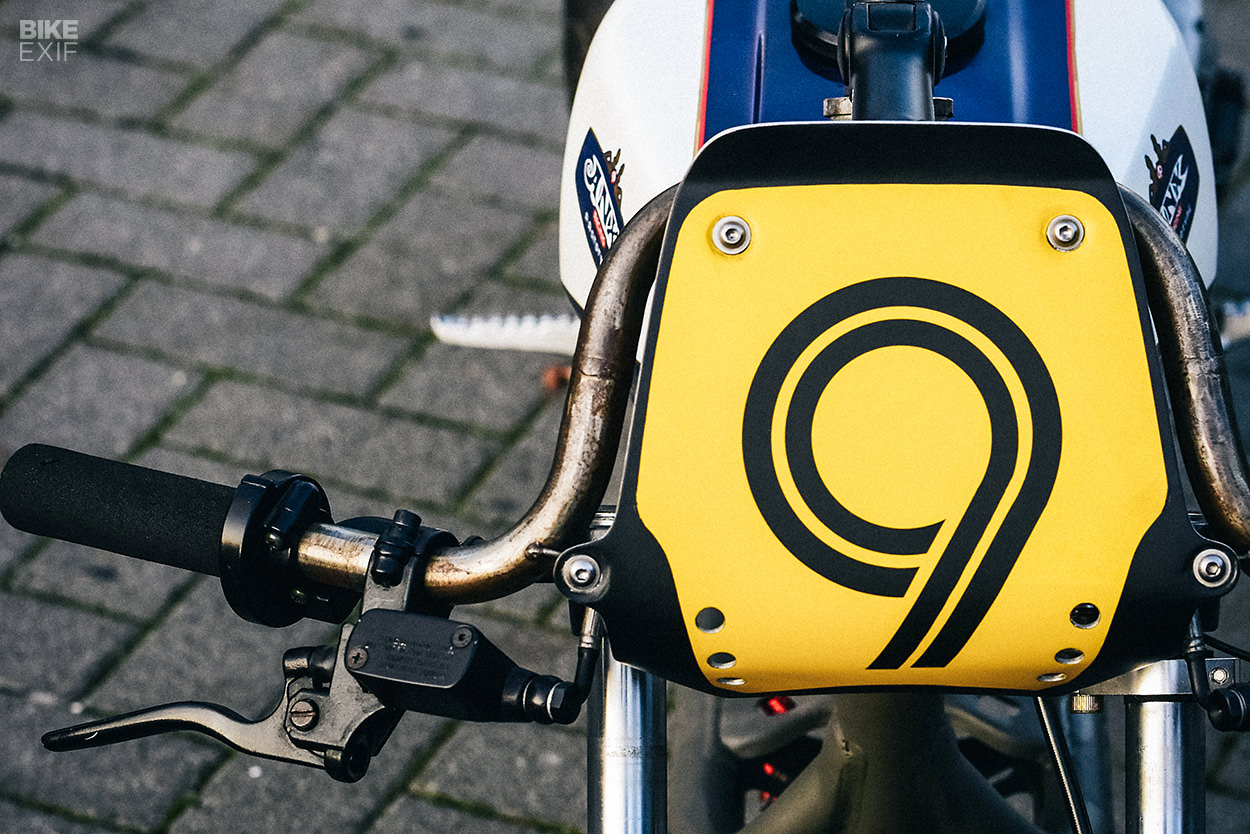 “Mirko purchased the fairings, and saw what I’d been working on. Then, a few months later, he approached me about doing a project together.”

Mirko had been working at Scooter Centre in Cologne for years, and had a lot of experience building scooter drag racing motors. He’d just bought the Piaggio; it had already been ‘converted’ for drag racing, with a makeshift hardtail setup that consisted of a steel table leg where the rear shock once was. 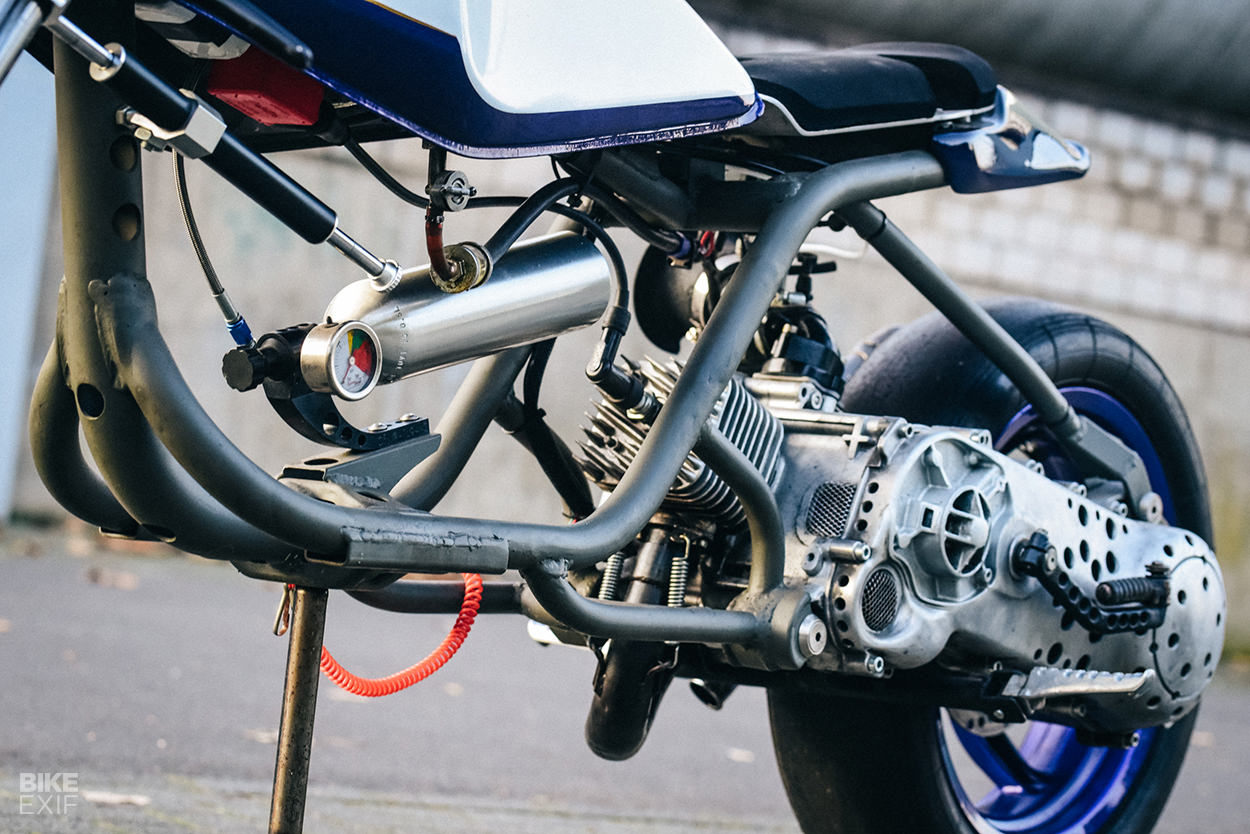 Nick and Mirko got talking, and before long had mocked up just how the NRG should look. Nick was so stoked on the idea, he stole the tank and tail he’d been working on for his NS400R, and began repurposing them for the Piaggio.

But first, the guys had to drastically rework the scooter’s frame. Not only did the table leg get tossed, but also the original engine brackets—so the entire back half of the frame is new. 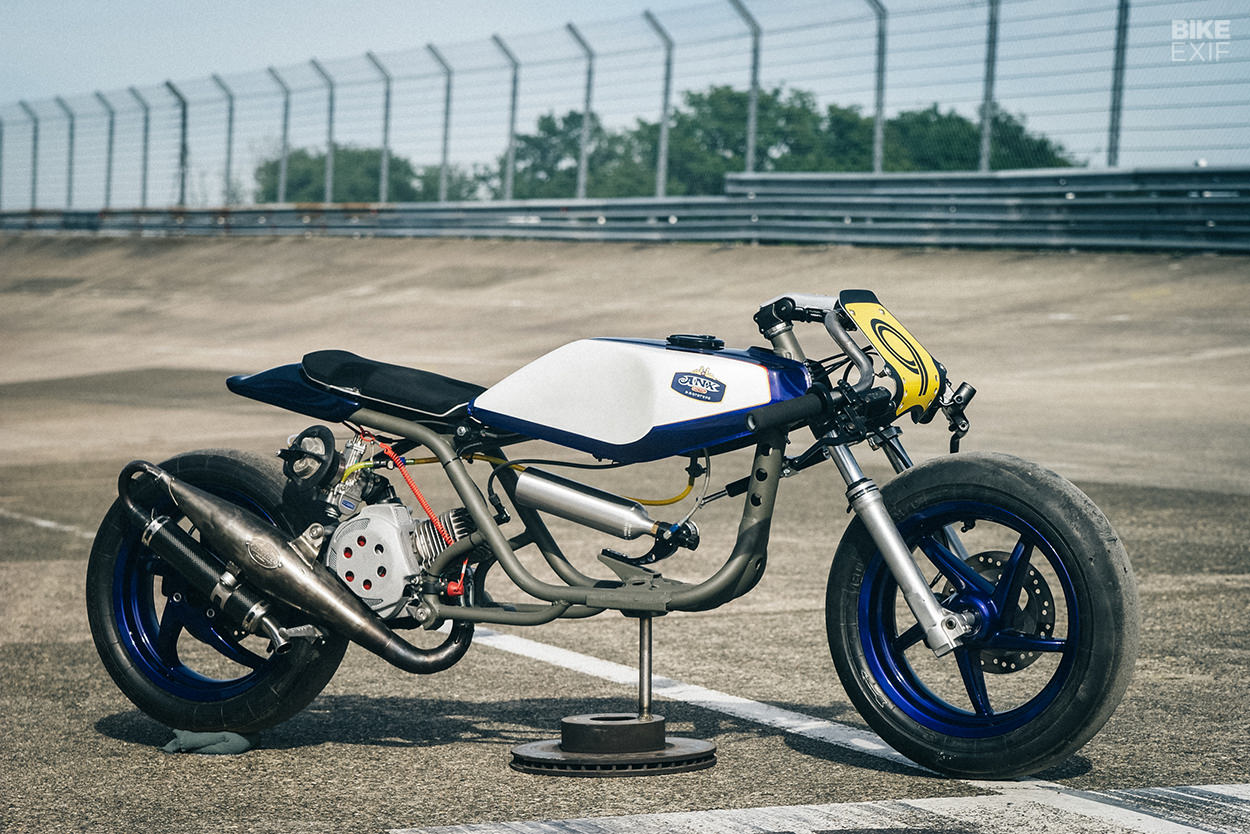 The original elastomer engine mounts were repurposed to hang the motor, and whole lot of reinforcing and lightening happened from front to back. Nick and Mirko also narrowed the seat perch, shortened the steering head and stretched the overall chassis by a couple of inches.

For the forks, they installed a set of Aprilia units, shortened them to just 80 mm of travel, and shaved off their brake mounts. The handlebars are ape hangers from a Honda V30 Magna—shortened, narrowed and mounted upside down on a mountain bike stem. 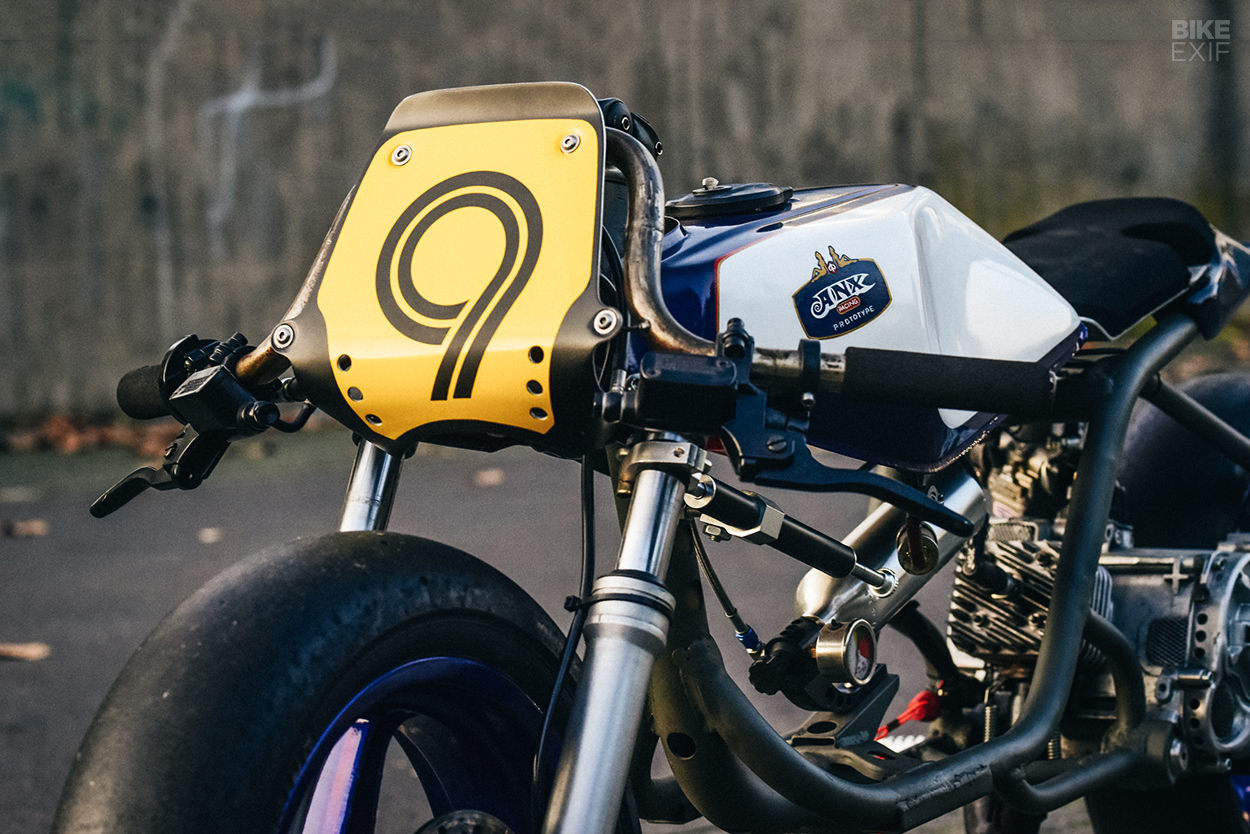 The wheels are stock, with the rear wrapped in one of the last 13-inch race slicks to be found in Europe. (They’re reportedly becoming more and more rare in that size).

With the rolling chassis sorted, Nick set about adapting his tank and tail to fit the NRG. The tank was originally adapted from a Kawasaki AR50, but the tail unit is a complete custom job. Nick made it from carbon fiber, and bolted it to an aluminum seat pan. 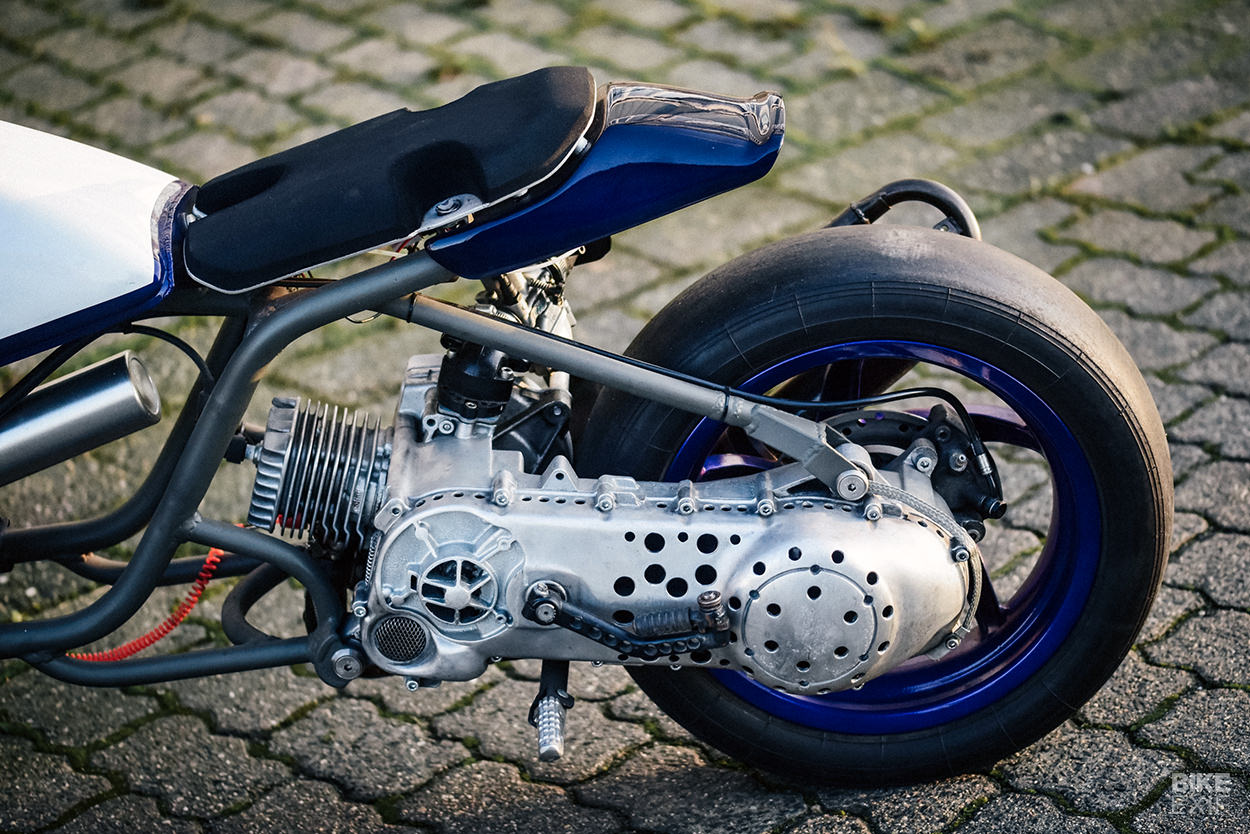 The seat pan attaches to the frame via three titanium quick-release fasteners, giving easy access to the motor. Getting the fuel tank off is equally simple—it hooks into custom-made tubular mounts up front, with just one bolt holding it at the back.

As Nick started buttoning up the last bits of the chassis and shell, Mirko turned his attention to the motor. He went to town, starting with a Polini Evolution 70 cc kit with longer con-rods and a stage six crankshaft. 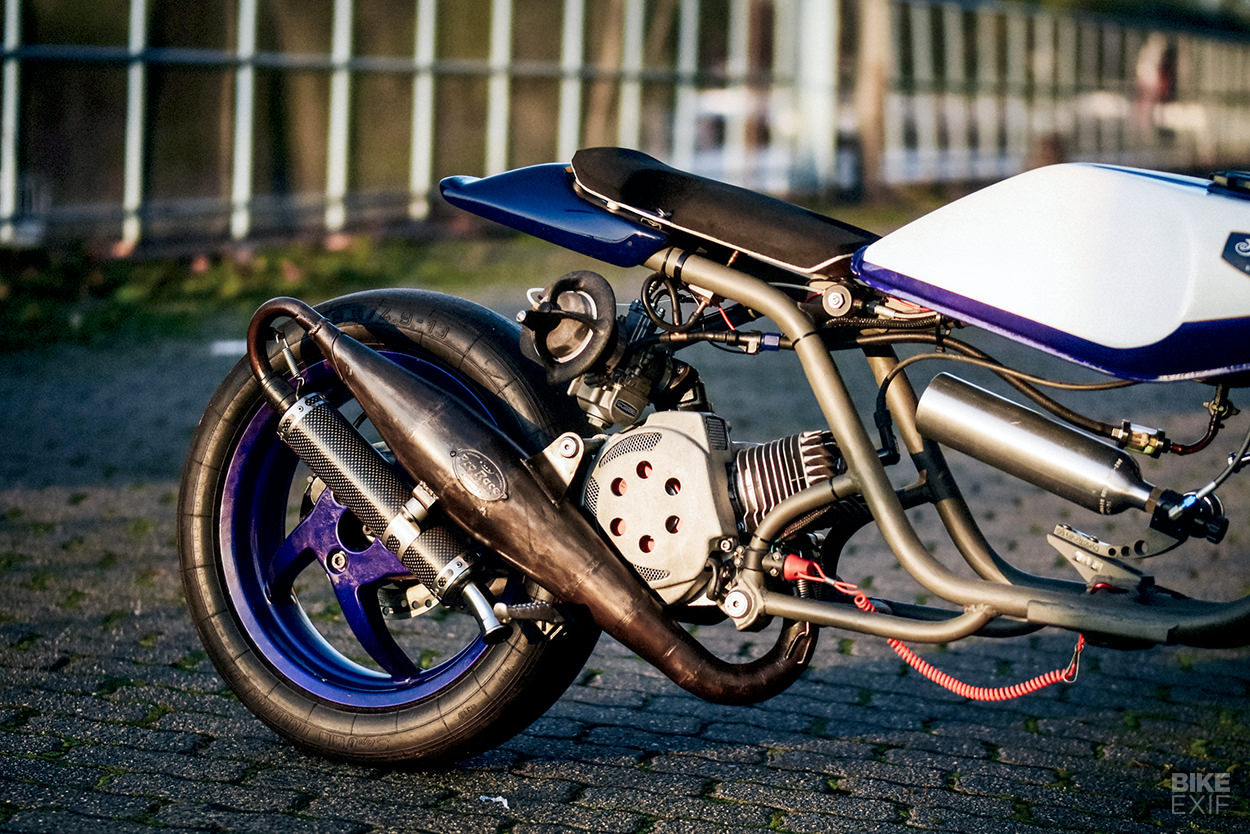 The exhaust consists of a Metrakit Prorace chamber with a Jim Lomas carbon muffler, and there’s a Malossi Delta CVT clutch in play too. Mirko also installed a Keihin 28 mm flatslide carb, a Motoforce adjustable intake with a carbon reed box, and an Italkit ignition.

The block, cylinder, intake, exhaust and piston were all ported and flowed, to bring the original NRG motor up to 20 PS. And the clutch is set up so that it’ll launch from 6,000 rpm, with power peaking at 9,300 rpm. 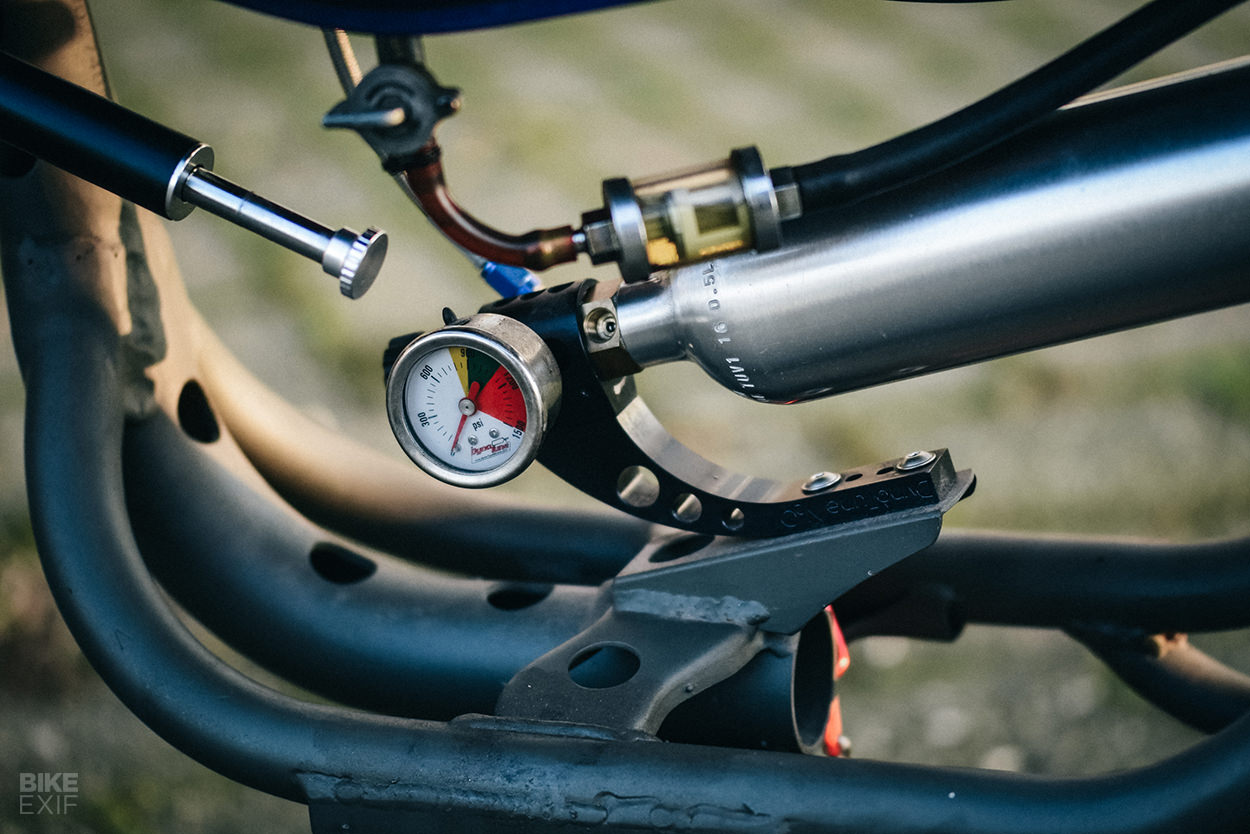 The NOS system comes from Dynotune in Florida. “I was researching who has experience with NOS and two-strokes,” Nick tells us, “and they seemed to be the only ones. Plus Mirko had never done one before and always wanted to give it a go.”

“Unfortunately this also meant the we needed to get the bottle filled here in Germany, as you cannot ship a full NOS bottle (not really a surprise).” 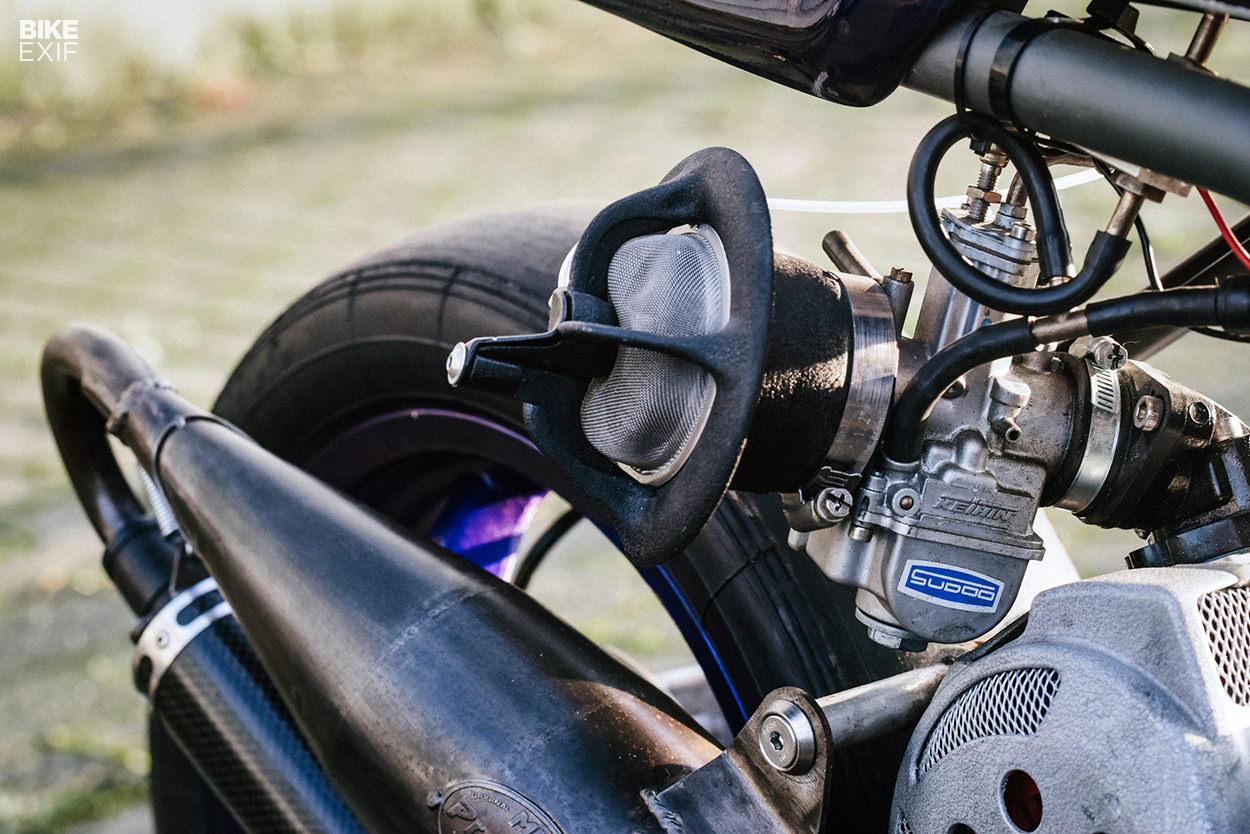 Nick made an intake funnel and nose mount for the system, using a Ducati 999 funnel as a base. The boost is solenoid-activated via a switch on the bars, and will only run off the Keihin power jet. “This gives us the ability to tune the NOS separately from the motor,” Nick explains, “so we don’t run too lean.”

Mirko’s actually still tuning the NOS setup, but the guys are expecting eight to 10 more PS when it’s ready. And then it’ll be time to go racing. 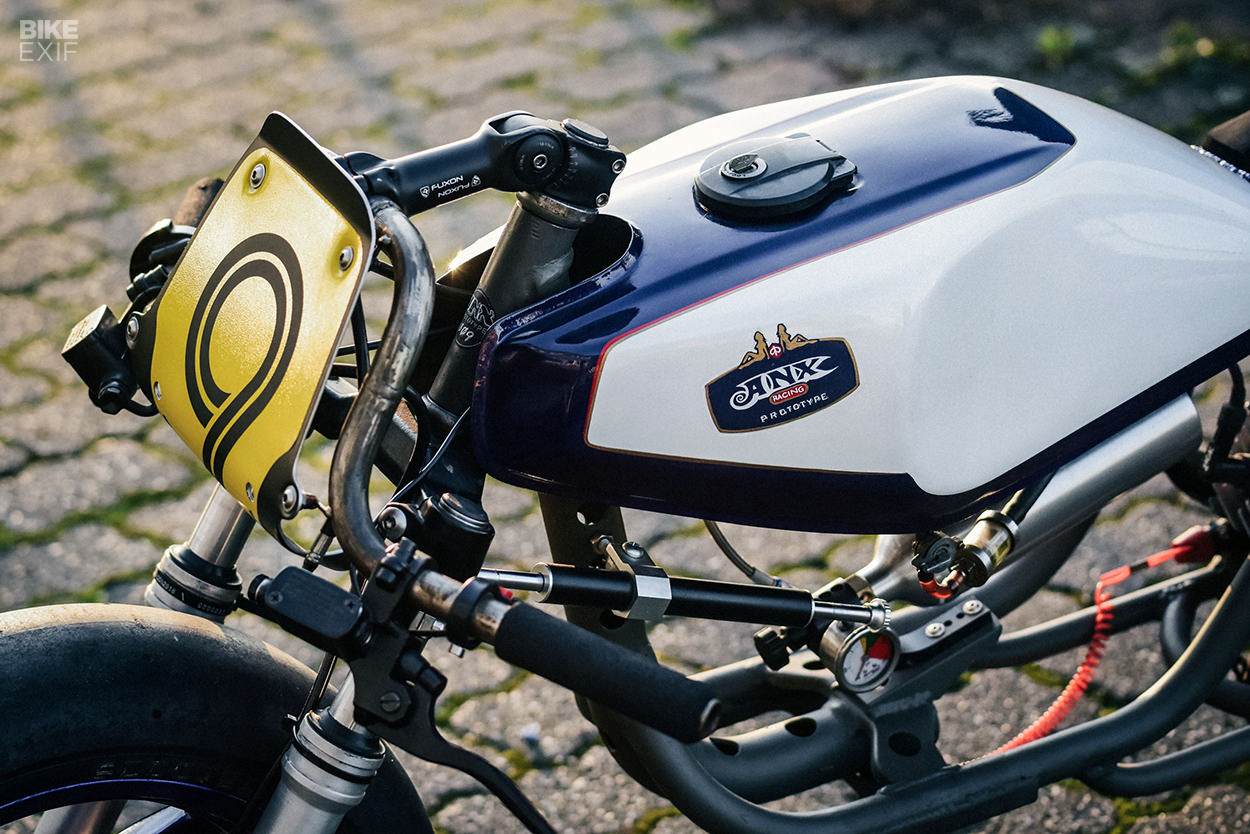 To make sure it looks the part, Nick treated it to a two layer purple and candy paint job, over a chrome base. The paint, all the fabrication work, and details like the custom ignition cover, were all done in-house.

Nick called in help for one detail; tattoo artist and pin-striper, Von Maze laid down a pin stripe and a stunning pair of tank graphics, all by hand. The logos read ‘ANX Prototypes’—the name of the bike building business Nick is launching.

If this boosted two-stroke doesn’t look like the most fun thing on two wheels, maybe check your pulse. And if you’re in Europe, look out for it on the sprint scene—and let us know how it sounds! 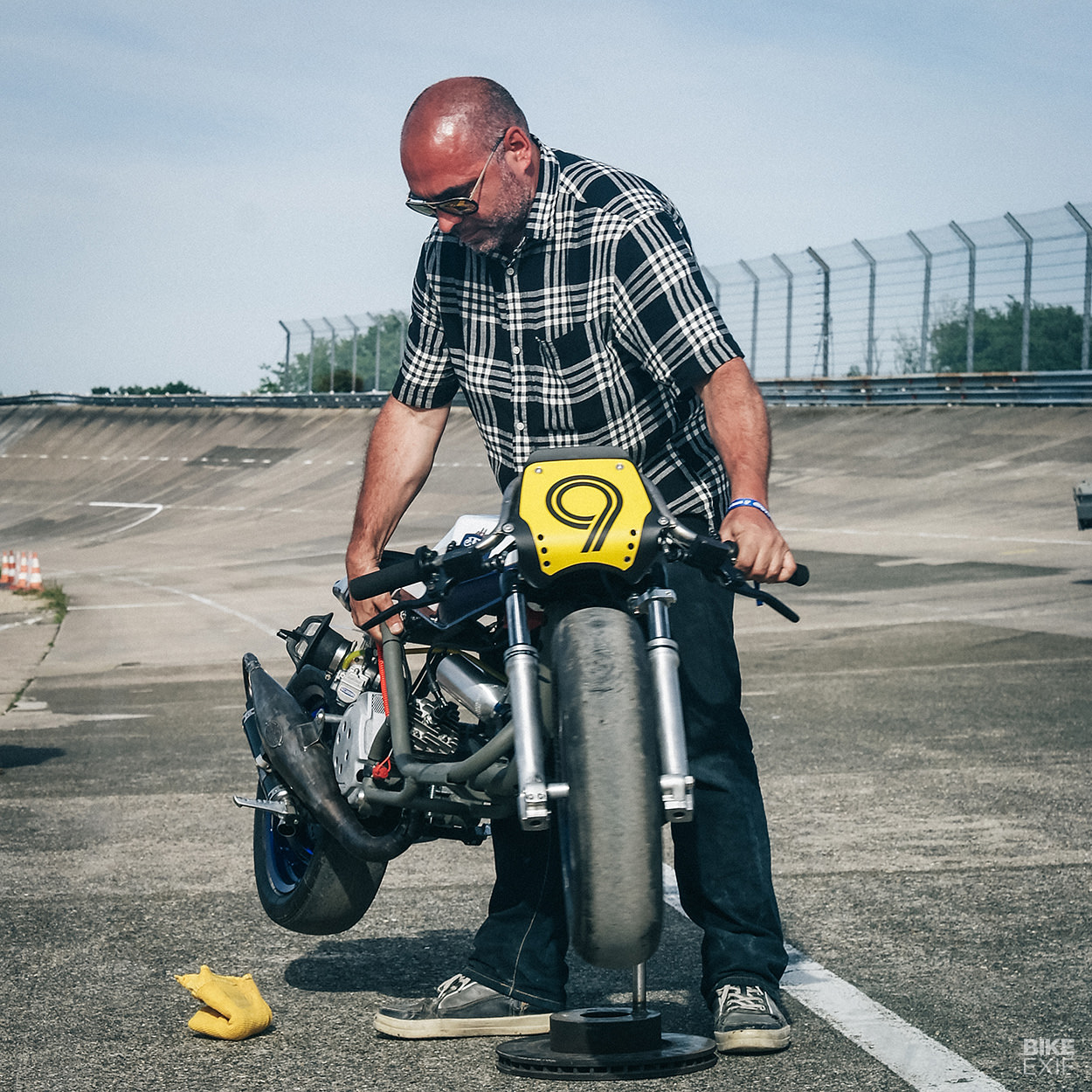